The triple-negative breast cancer trial backs neoadjuvant Keytruda, and the good news for Merck is that an adjuvant benefit cannot be ruled out either.

Judging by results presented at the Esmo congress today the Keynote-522 trial has given Merck & Co a good shot at getting Keytruda to market in triple-negative breast cancer – a scenario not afforded by Keynote-119, whose full unveiling revealed it to be an unequivocal bust.

What is still a mystery is whether ‘522 opens up the bigger and more important adjuvant setting as well as neoadjuvant use. But the hint is there: “When we look at event-free survival [in Keynote-522], that’s driven possibly by ... the adjuvant path,” the study’s lead author, Professor Peter Schmid of Barts Cancer Institute, told an Esmo press briefing.

The reason this ambiguousness exists is that Keynote-522 involved two phases: its 602 enrolees were first given Keytruda or placebo plus chemo before surgery (neoadjuvant), and then – after tumour resection, so in the adjuvant setting – the former group got Keytruda again, while the latter received placebo.

This point is important: while the total market for giving a drug around the time of TNBC surgery is thought to be worth $2bn, adjuvant use comprises the lion’s share. Asked by Vantage, a Merck spokesperson would not be drawn on whether Keynote-522 would in fact support Keytruda’s approval as adjuvant, a use where the drug might be given until disease progression.

Keynote-522 had two co-primary endpoints – pathological complete response (pCR) and disease-free survival – and only the first is sufficiently mature to report. 64.8% of Keytruda-treated subjects had a pCR, versus 51.2% for those randomised to chemo alone (p=0.00055).

Hinting at the survival endpoint Professor Schmid said: “If we prevent recurrence, we cure more patients, but we need longer-term data for confirmation.” Nevertheless, he was able to show immature survival curves, in which at 18 months 91.3% of Keytruda recipients were event-free, versus 85.3% of those on placebo. 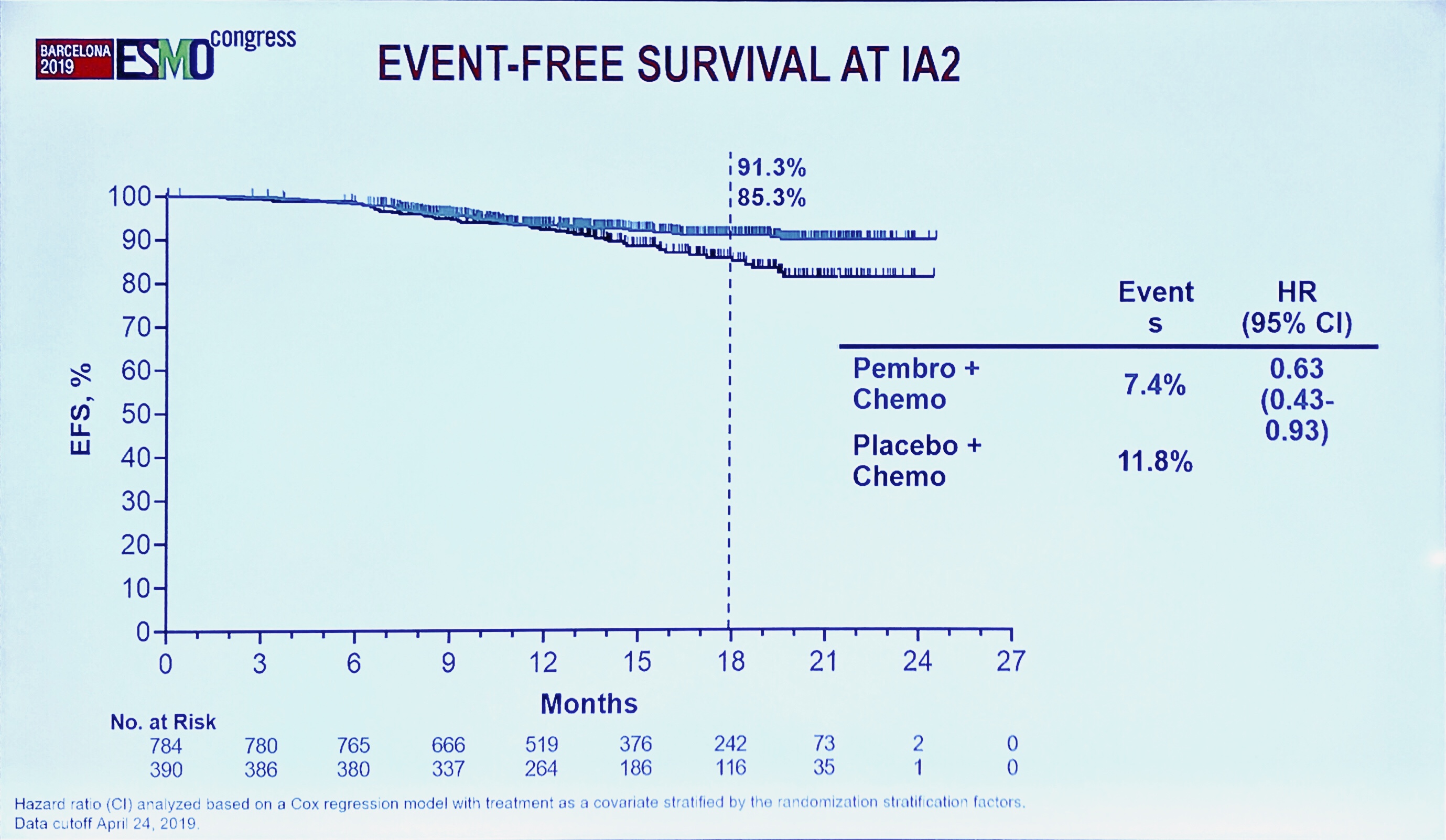 Institut Gustave Roussy’s Professor Fabrice André was even more bullish, stating that pCR itself was a valid endpoint for US FDA approval. However, he accepted that this would only be proved if Merck chose to file Keytruda based on the pCR data alone; Merck says it will share the findings with regulators.

It is also important to understand how the two endpoints could back Keytruda’s use in adjuvant as well as neoadjuvant use. Professor Schmid explained that pCR rates were determined by the neoadjuvant phase, but that improvement in event-free survival could be the result of Keytruda being given in both stages of Keynote-522.

“We cannot separate how each of the phases contributed to the overall benefit,” he added. If doctors and regulators claim that Keynote-522 backs only Keytruda’s neoadjuvant use Professor Schmid’s view could provide an important counterargument.

But the more fundamental point is that the perioperative setting as a whole represents Keytruda’s way into TNBC, a cancer where immunotherapy’s only real success has been the US approval of Roche’s Tecentriq, combined with Abraxane, in first-line patients expressing PD-L1 at ≥1%.

Keytruda, for instance, failed in the second/third-line TNBC Keynote-119 study, whose full analysis featured at an Esmo late-breaker on Saturday. IOB Institute of Oncology’s Dr Javier Cortés revealed that the sequential cuts of Keynote-119 by PD-L1 expression – ≥10%, ≥1% and all-comers – showed virtually no separation in overall survival curves.

The one hope was an exploratory analysis in 109 ≥20% expressers, which he said accounted for around 18% of TNBC cases, where median OS was 14.9 months versus 12.5 months for chemo control. This “clear trend” was enough for Dr Cortés to say Keytruda would work in TNBC if an optimal PD-L1 cutoff was selected prospectively.