The Paola-1 study of Astrazeneca and Merck & Co’s Lynparza plus Avastin shows that more ovarian cancer patients can benefit from Parp inhibition, though the role of the Roche antibody is less clear.

At last year’s Esmo Lynparza was one of the stars of the show, demonstrating a dramatic impact in BRCA-positive ovarian cancer patients in the Solo-1 study. The Paola-1 trial, unveiled in today's presidential symposium, confirms that a much larger pool of patients could benefit from Parp inhibition.

The investigator-sponsored study recruited all patients, regardless of mutation status, and progression-free survival was significantly extended across the trial. However a closer look at the data shows that result was driven by subjects with homologous recombinant deficiency (HRD), a finding that was echoed across the three front-line maintenance Parp trials in ovarian cancer released simultaneously in Barcelona today.

A BRCA mutation is one form of HRD, and all increase a patient's susceptibility to Parp inhibition. At a press conference this morning physicians were fairly confident that all front-line patients could now be offered a Parp inhibitor as a maintenance therapy, although largely because of the lack of availability of a reliable test to split out those unlikely to respond.

“The really key point is that most benefit is seen in BRCA positives and those with HRD, and it would be helpful to have an HRD assay to help counsel patients,” said Dr Susana Banerjee of the UK’s Royal Marsden Hospital. “[Treating all comers] has happened in recurrent disease, so let’s see how the community embraces these results, but I would imagine that is going to happen in this setting.”

Though Paola-1 recruited patients regardless of HRD status, the results were stratified according to various cuts of genetic subtypes. The trial selected patients who had responded to a front-line regimen that included Avastin on top of platinum chemo, a key differentiator from Solo-1 and the two other front-line Parp trials being presented today, Prima and Velia.

Subjects were then treated with Avastin or Avastin plus Lynparza as maintenance. Across all patients, the risk of progression was reduced by 41% in the combination maintenance arm versus Avastin only (p=0.0001). Median PFS was 22.1 versus 16.6 months.

A look at results from patients with HRD shows how this overall result was driven by these high-responding patients. In those without evidence of HRD, plus patients whose genetic status could not be confirmed, there was no benefit: the hazard ratio was 0.92. 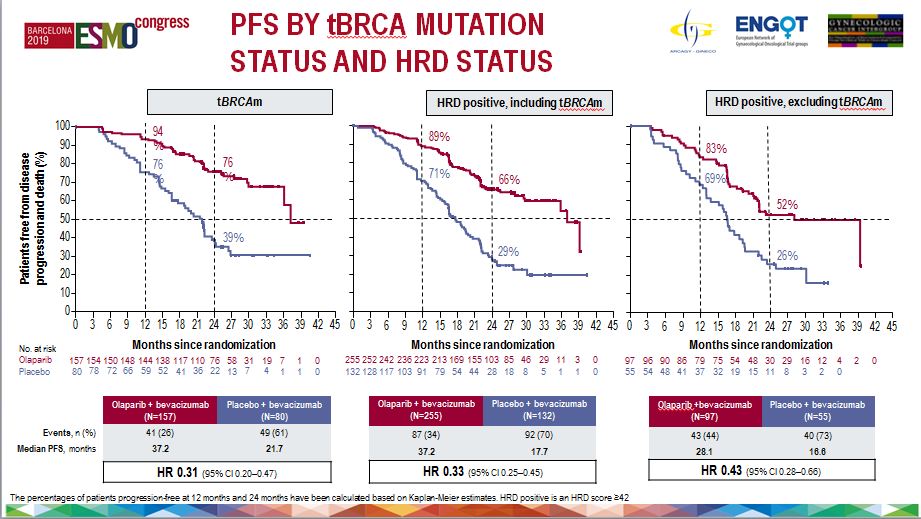 However, Paola-1 did not really answer the question of what Avastin is adding to patients with BRCA-positive disease, the subgroup that responds most strongly to Parp inhibition.

In Paola-1 the hazard ratio in the BRCA1/2 group is the most impressive, at 0.31. This is bang in line with the Solo-1 result, the phase III trial that won Lynparza approval in a front-line setting, of 0.30.

“There are different populations that may benefit from a combination, and those that would benefit equally from a single agent,” Dr Banerjee said.

Rates vary around the world but it is thought that only half of ovarian cancer patients receive Avastin alongside induction chemotherapy, and even fewer receive it as a maintenance treatment. This is partly due to toxicity but also because not all physicians are convinced about its role.

“The way we’re viewing it is Avastin is a standard of care in this treatment setting, and this trial was able to show that in women who would get Avastin you can add Lynparza, safely and effectively,” Scott Ebbinghaus, vice-president of clinical research for Merck, told Vantage.

The big question is whether this study will allow Lynparza to gain approval to treat all front-line ovarian cancer, regardless of HRD status, though presumably any label would restrict its use to Avastin combination therapy. Dr Banerjee commented that in the refractory setting the Parp inhibitors are considered to be equally effective, so perhaps this would not matter.

But Glaxosmithkline is also looking to move into this space on the back of the Prima trial, which is arguably a much clearer test of Parp inhibition in a broad patient population (Esmo 2019 – Glaxo’s Parp ambitions get a boost, September 28, 2019). Astrazeneca and Merck could finally have a real fight on their hands.