A surprisingly successful study of Opdivo and Yervoy suggests that the enrolment of so-called hyperprogressors could have scuppered other trials.

If mesothelioma is too intractable for biopharma companies to devote much money to then at least academic co-operative groups can be relied on to pick up the slack. And one of these, Intergroupe Francophone de Cancerologie Thoracique, has scored an important result in its Maps-2 study, the Esmo congress heard today.

Though the trial was exploratory, it showed a “never-before seen” survival benefit with Opdivo plus Yervoy, said its presenting author, Professor Gerard Zalcman, of Hopital Bichat Claude Bernard. More importantly, perhaps, his findings hint at why so many mesothelioma studies fail: the influence on the overall result of patients he called “hyperprogressors”.

The question now is how hyperprogression has affected other trials, and whether patients whose mesothelioma progresses “classically” can derive a real benefit from immune and other late-line therapies. For instance, another trial profiled at Esmo today, Promise-meso, found no survival benefit whatsoever favouring Keytruda versus chemo.

The issue might have to be considered in ongoing mesothelioma studies, it was suggested, including Checkmate-743, one of the few large, industry-sponsored trials under way in this disease.

In Maps-2, a trial in the second or third-line setting, Bristol-Myers Squibb’s Opdivo monotherapy resulted in median overall survival of 11.9 months, while a combo with Yervoy gave 15.9 months. Given the extremely aggressive nature of mesothelioma this was a sign of the two drugs being “truly active”, said Professor Zalcman.

His group further analysed the 125 subjects enrolled and, using certain criteria calculating tumour growth rate, identified 11 as being hyperprogressors. The effect on median overall survival was striking: 23.1 months for subjects with disease control, 5.5 months for progressors, and only 2.6 months for hyperprogressors.

One reading of Maps-2, therefore, might be that it was lucky that only 11 of these extremely poor-prognosis patients were enrolled into it. Nevertheless, discussing the data, Institut Curie’s Dr Nicolas Girard called Maps-2 “clinically meaningful”, something that might bode well for Checkmate-743, though this tests Opdivo plus Yervoy first line.

He also suggested that the early part of the survival curves in Promise-meso, a second-line Keytruda trial run by the ETOP Foundation and unveiled at a late-breaker, was similar to those of Maps-2 hyperprogressors, and hinted that subjects in Promise-meso might in fact have had this aggressive disease. 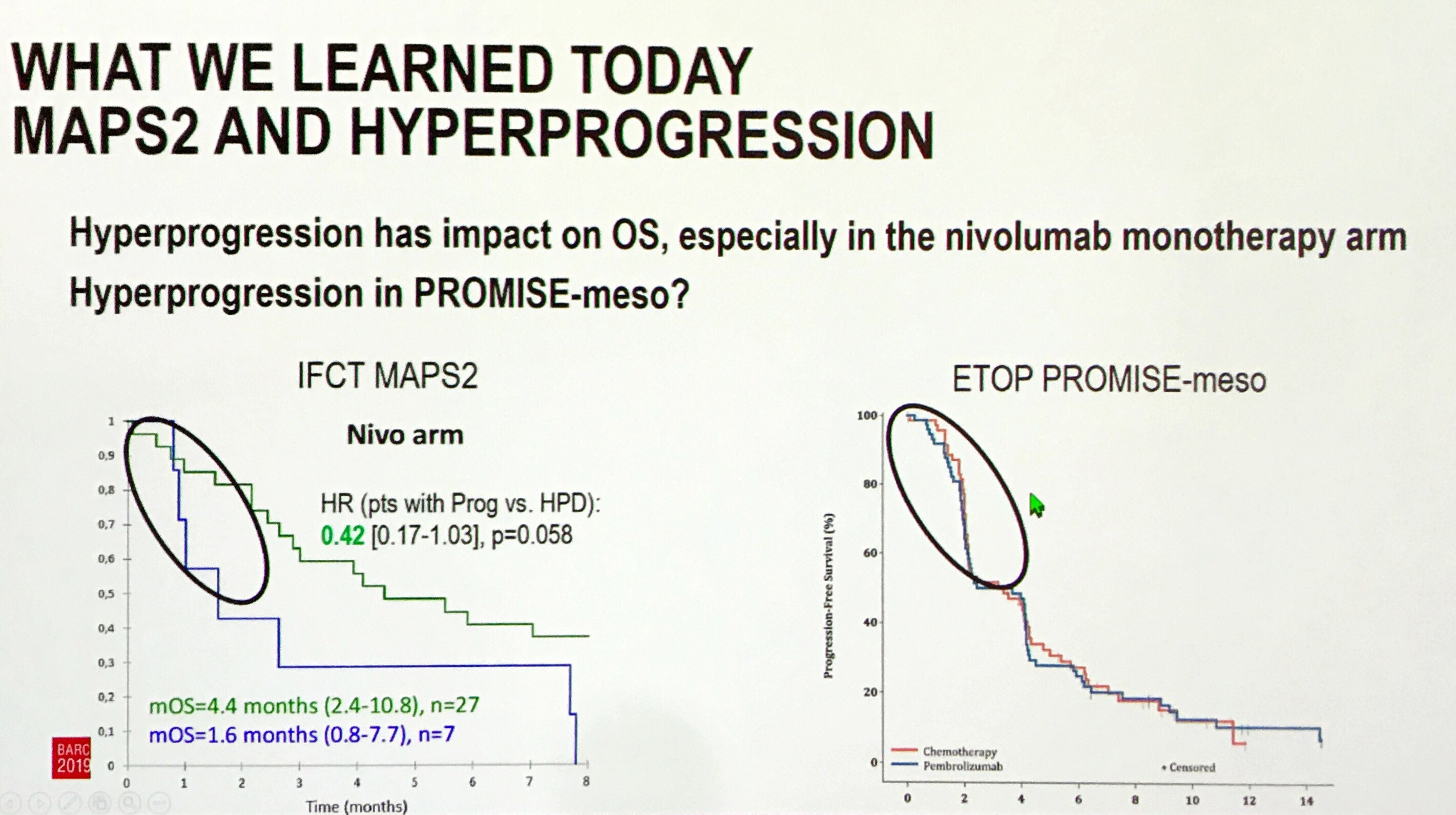 Despite bullishness from Esmo and from the lead investigator, Dr Sanjay Poppat of Royal Marsden Hospital, Promise-meso was a bust, showing no progression-free survival benefit, its primary endpoint, with a 6% increased risk for progression at any time for Keytruda subjects. Median OS was also numerically worse for Keytruda, at 10.7 versus 11.7 months for chemo.

There was no effect even adjusting for the 63% of control subjects who crossed over to Keytruda, and no identifiable subgroups derived a benefit from the Merck & Co drug. A separate Keytruda study, profiled at Asco 2017, had highlighted large differences in response between PD-L1-high patients and those with no expression.

Surprisingly, in Promise-meso there was a seemingly strong difference in overall remission rates – 22% for Keytruda versus 6% – but as most were of very short duration they did not translate into a survival benefit.

While there are no universally accepted mesothelioma treatments second line or beyond, US NCCN guidelines already list Opdivo with or without Yervoy, as well as Keytruda, as possible options.

Meanwhile, another academic trial, run by the Swiss SAKK group, gave Pharmamar’s Zepsyre to 42 second/third-line subjects, and reported that this resulted in median OS and PFS of 11.1 and 4.1 months. Interestingly, in this case “slow” as well as “fast” progressing patients benefited from Zepsyre, Kantonsspital Graubünden’s Dr Yannis Metaxas told Esmo today.

Pharmamar’s focus with Zepsyre is small-cell lung cancer. Nevertheless, Dr Metaxas said his data warranted the testing of this project in mesothelioma in phase III.