Lynparza looks set to add a third tumour type to its label, strengthening the grip of Astrazeneca and Merck & Co on the Parp inhibitor market.

Results in second-line prostate cancer with Astrazeneca and Merck & Co’s Lynparza were hailed as a major step forward for this disease at the Esmo congress today. The Profound trial showed significantly extended progression-free survival in patients with three specific gene mutations and in a wider population – though any hopes for a broad label might be overdone.

The Profound study recruited patients with metastatic castration-resistant prostate cancer, who had relapsed on front-line hormonal agents – Pfizer’s Xtandi or Johnson & Johnson’s Zytiga – and pitted Lynparza against retreatment with either one of those drugs. Subjects had to be carrying mutations in one of 15 genes that play a role in homologous recombination repair mechanisms, and which are thought to confer sensitivity to Parp inhibition.

The primary endpoint measured radiographic PFS in a cohort of patients carrying either BRCA1 or 2 or ATM mutations. Here the effect was most pronounced, with a 3.8-month survival advantage equating to a 66% reduction in the risk of progression (p<0.0001). Because this hit statistical significance the result in the whole population was analysed: here, a 2.3-month survival advantage equated to a 51% risk reduction (p<0.0001).

The trial has proved a new concept in prostate cancer, as well as showing that Lynparza is superior to these agents in this setting, said Dr Ignacio Durán, of Hospital Universitario Marques de Valdecilla.

“This is the first time we have been able to identify that we can more precisely categorise the molecular biology of these tumours, and that is going to determine how we treat [these patients],” he said. 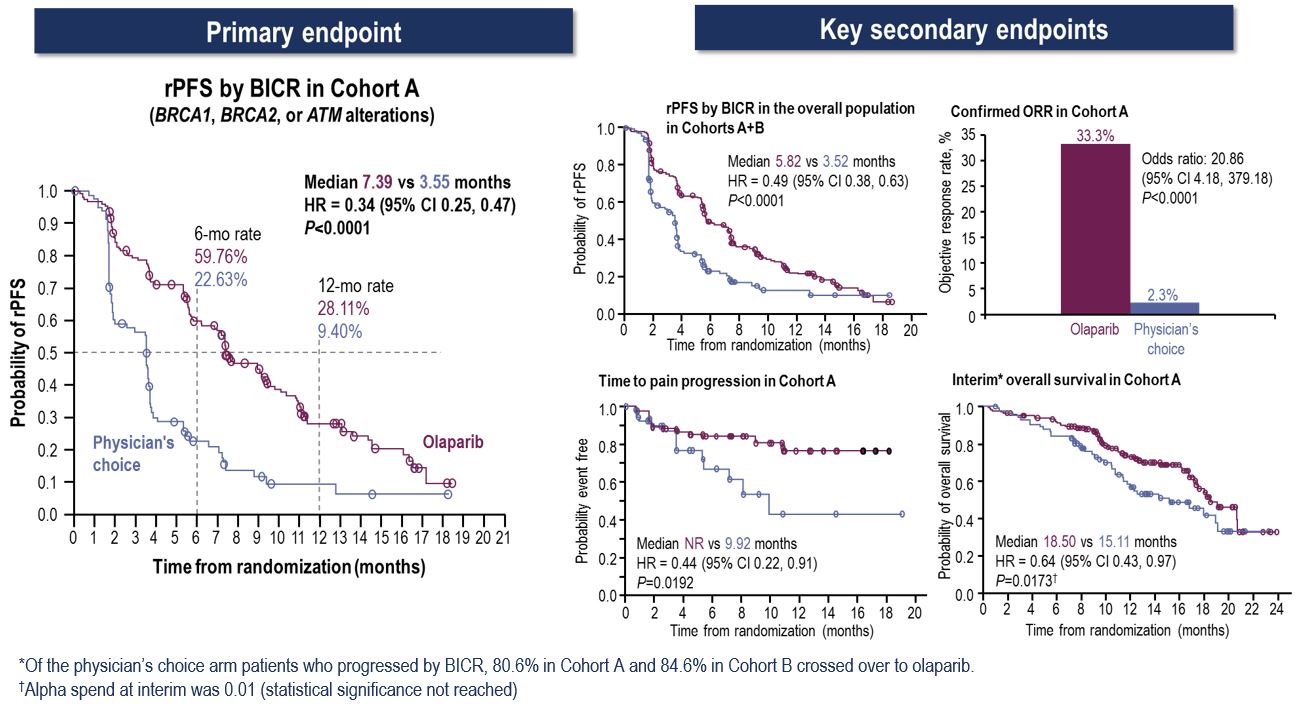 Still, it is clear that not all the genes analysed conferred the same level of response, a finding that has been seen in other Parp prostate cancer trials. Data from two other studies, the Triton 2 trial of Clovis's Rubraca and the Galahad study of Glaxosmithkline's Zejula, were also presented at Esmo this weekend, with researchers concluding that carriers of CDK12-deficient tumours were unlikely to benefit from Parp inhibition, for example.

Notably, however, the Profound study seems to have confirmed the role of ATM; carriers of this mutation have not always responded to Parp inhibitors. In the Triton 2 dataset very little activity was recorded in these patients, and many are like to agree with Dr Castro’s conclusion that beyond BRCA better predictors of response are needed.

Estimates vary, but it is thought that BRCA1/2 patients could represent around 12-15% of prostate cancer cases, with ATM accounting for a further 5-7%. By wrapping the two together in the primary endpoint Astrazeneca arguably took a risk, with the reward presumably being a slightly larger target market should the combined mutations show a significant benefit. Other gene mutations related to homologous recombination repair grow the addressable market to about 25% of mCRPC.

Astrazeneca told Vantage that detailed analysis of gene-level effects was ongoing and would be presented at a forthcoming meeting. It declined to specify whether it would seek approval in the BRCA1/2 and ATM cohort, or in all patients.

What regulators will make of these data is the next question. An argument for approval in all the gene mutations tested in Profound could be made based on PFS. But some of the mutations will have been represented by only a handful of patients, making it impossible to say with any confidence whether Lynparza bestowed a real benefit. Perhaps more importantly, an alternative therapy might work better for some groups.

While approvals in BRCA1/2 and ATM seem likely – an opportunity that could be worth $500m a year in the second-line setting, analysts believe – thoughts of a broader label are probably premature. Two ongoing all-comer studies will help illuminate the potential here: Propel, which tests Lynparza in combination with Zytiga front line, and Keylynk-010, which pits Lynparza plus Keytruda against Zytiga or Xtandi, in a third-line setting.

Results from these trials are unlikely to emerge until 2021, however. But then this was probably always going to be a slow-growing market for the Parp inhibitors: testing for genetic drivers in prostate cancer is not commonly undertaken. Astra and Merck have plenty of time to turn minds in this field, while broader evidence of utility is sought.