The rare disease bile duct cancer is set to be carved up by genetic subtype, and will see two targeted treatments filed soon.

If last year’s Esmo meeting saw the dawn of targeted therapy in bile duct cancer then attendees of this year’s conference were in for a nice surprise: IDH1 joined FGFR2 as a mutation that could hold the key to treating this rare cancer with a targeted approach.

Pemigatinib inhibits FGFR1-3 kinase, and is intended specifically to avoid FGFR4, which can be responsible for off-target toxicity, and to work in FGFR2 fusions or rearrangements, said Incyte’s chief executive, Hervé Hoppenot.

The group’s uncontrolled Fight-202 trial was the subject of a Friday Esmo late-breaker that confirmed pemgatinib’s activity in FGFR2-driven disease, as well as showing no responses at all in subjects with other FGF/FGFR alterations, or no such mutations.

This year’s Fight-202 update confirmed the ORR benefit in a higher number of FGFR2-mutant patients, 107, as well as yielding median progression-free and overall survival data of 6.9 and 21.1 months respectively. Mr Hoppenot called the survival result “very reassuring, to put it mildly”; cholangiocarcinoma patients at this stage, second or third line, typically live for 6-10 months.

“This is the dataset that goes to the FDA and EMA,” said the chief exec. 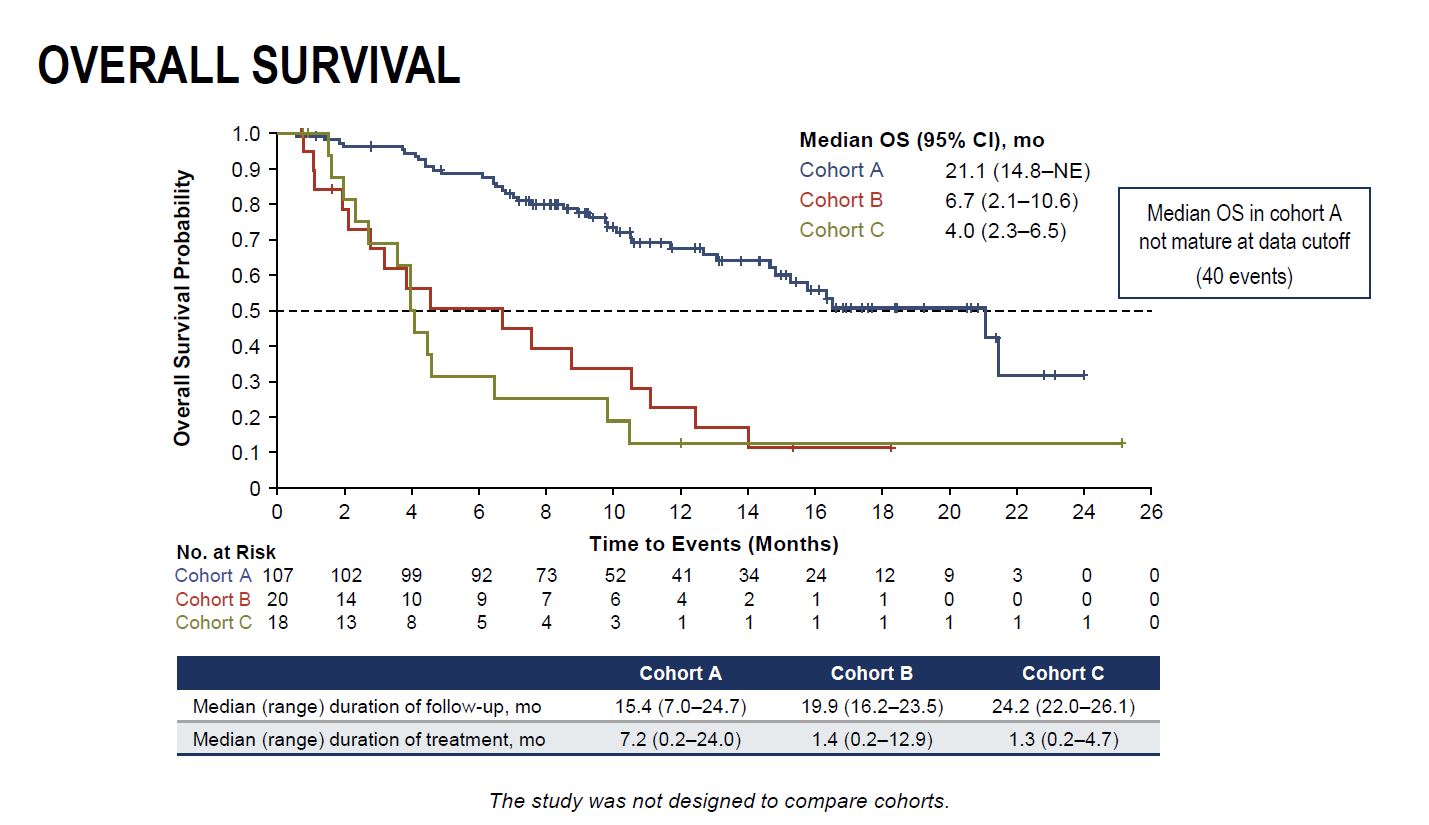 For its part, Agios was similarly upbeat, saying it would file Tibsovo additionally for cholangiocarcinoma by the end of 2019 based on the data in today’s late-breaker covering the pivotal double-blind Claridhy trial.

This recruited 185 second or third-line cholangiocarcinoma subjects whose tumours were positive for the IDH1 mutation, and set PFS as primary endpoint – a measure that was hit with an extraordinary 63% reduction in risk of progression (p<0.001).

However, numerically the median amounted to just a 1.3-month advantage for Tibsovo over the placebo cohort’s median PFS of 1.4 months. Median overall survival was 10.8 months for Tibsovo and 9.7 months for placebo, missing statistical significance.

One important consideration is that placebo recipients were allowed to cross over to Tibsovo on progression, and 57% did so; median OS for those who did not was just 6.0 months. But one clear issue is how much shorter the survival of IDH1-mutated subjects treated with Tibsovo was compared with that of FGFR2 mutants given pemigatinib.

Dr Ghassan Abou-Alfa, from Memorial Sloan-Kettering, was in a perfect position to comment, having been lead author of Claridhy and a co-author of Fight-202. At an Esmo press briefing today he said it would be unfair to compare across two studies – especially when one was uncontrolled – and across the two mutually exclusive mutations.

Dr Angela Lamarca, from the Christie NHS Foundation Trust, said there were some retrospective data suggesting that FGFR2 fusion-positive tumours might have a better prognosis, but added: "We don’t know yet whether IDH1 has any impact on prognosis.”

If the benefits of Tibsovo seem numerically marginal, in a disease as poorly treated as cholangiocarcinoma they might be enough to tie a second string to Tibsovo’s bow.

Dr Abou-Alfa was in no doubt about their impact. “All patients with cholangiocarcinoma should be tested for ID1 mutation,” he said. “Tumour mutation profiling should be a new standard for the case of patients with this heterogeneous tumour.”

He also opined that Clarihdy demonstrated for the first time the feasibility and clinical benefit of a molecularly defined approach, though of course Incyte and others seem to have got there first with FGFR.

IDH1 mutation occurs in 15% of cholangiocarcinoma patients, and as a whole the cancer amounts to only 3,000 or so new cases a year worldwide. FGFR2, meanwhile, drives 10-15% of cases.

EvaluatePharma sellside consensus data see 2024 sales from pemigatinib and Tibsovo of $127m and $669m respectively, though neither forecast splits out cholangiocarcinoma specifically. J&J’s FGFR1-4 inhibitor erdafitinib was in April approved for bladder cancer as Balversa, and was not a major feature of the 2019 Esmo congress.

Incyte is separately running a first-line study, Fight-302, which it hopes can also be used to confirm an accelerated approval based on Fight-202.