As selpercatinib confirms its activity in thyroid cancer, Eli Lilly gears up to prove the Ret inhibitor’s potential in larger trials.

Hot on the heels of Lilly's unveiling of impressive selpercatinib results in Ret-driven lung cancer at World Lung earlier this month, the Esmo congress today saw data in thyroid cancer that confirmed the agent’s activity and likely approval next year.

This dataset will form a US accelerated approval application, and some are wondering whether whether the FDA will sanction the drug's use in treatment-naive as well as relapsed patients. Ever-optimistic sellside analysts have raised this possibility, although Jake Van Naarden, who remains Loxo’s chief operating officer after the biotech's takeover by Lilly, played down the likelihood.

“In first-line medullary thyroid cancer cabozantinib and vandetinib are fully approved based on randomised survival studies, so I think it’s a hard sell. I would say the same about lung cancer, with the only caveat that the lung cancer data in the first-line setting are truly striking. But we will see what the FDA says,” he told Vantage in an interview.

Lilly is gearing up to start confirmatory phase III trials in MTC and NSCLC in the coming months. In the former selpercatinib will be pitted against standard of care – physician’s choice of Exelixis’s Cabometyx (cabozantinib) or Sanofi’s Caprelsa (vandetinib) – and Mr Van Naarden said the Libretto-001 data made him hopeful of success.

In Libretto-001 pretreated MTC patients have been followed for 11 months so far, and median PFS has not yet been reached; in its first-line trial Cabometyx generated a median PFS of 11.2 months.

“We’re seeing durability in second and third-line settings that rivals what has been seen [with Cabometyx] in first line, and we’re seeing that with much less toxicity,” he said.

First-line patients have only been followed for six months, but of the 76 subjects only one progression event has been recorded, which he said was a “very compelling durability signal”.

“Response rate matters a lot for regulators and from a competitive perspective, but for patients it's durability that matters,” he added. 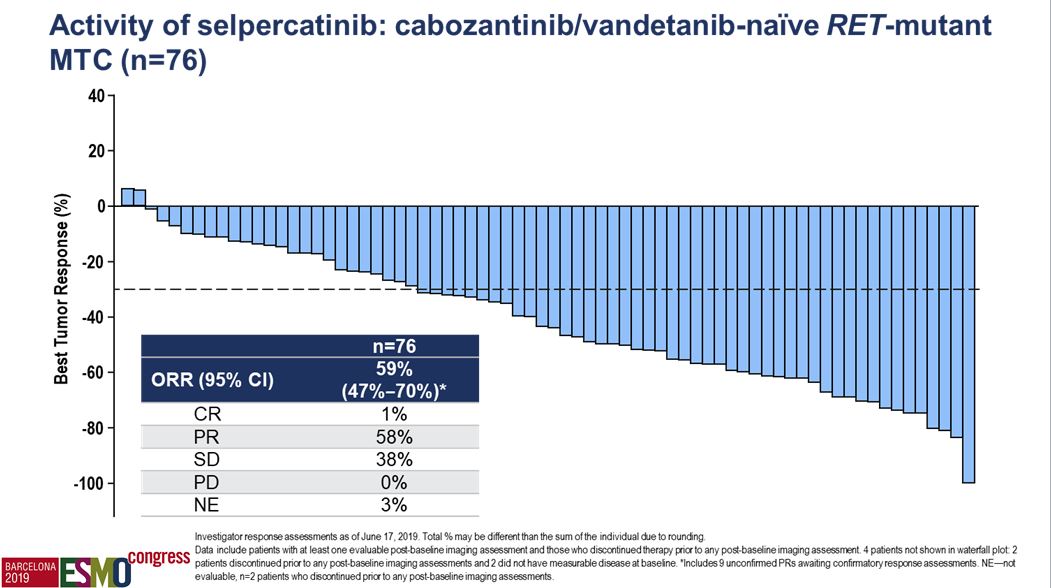 The phase III trial in Ret-driven lung cancers will pit selpercatinib against platinum chemo and physician's choice of adding Keytruda.

“For non-EGFR Alk NSCLC that is the standard of care. We want to convince the world that EGFR Alk ought to be EGFR Alk Ret,” Mr Van Naarden said.

In the Keynote-198 NSCLC trial the Keytruda arm generated PFS of 8.8 months; it is not known with any certainty whether those with a Ret fusion perform differently on this regimen. But an 85% response rate in untreated patients is raising hopes that selpercatinib will emerge as a new standard of care for this subset of patients; 2% of lung cancers are thought to be Ret fusion-positive.

Sellside analysts already forecast sales of $529m by 2024, according to EvaluatePharma. It is not only Lilly that has high expectations here.