Amivantamab is said to target both EGFR and cMet receptors, and in an attempt to improve response rates even further J&J is trialling it on top of its novel third-generation EGFR-targeting TKI, lazertinib. After seeing a 100% response rate in 20 previously untreated EGFR-positive metastatic patients, the company has decided to pit the combination against what is widely viewed as the best-in-class agent, Astrazeneca’s Tagrisso, in a phase III trial.

The pivotal Mariposa trial is poised to start enrolling shortly, and this will surely be a make-or-break move for J&J’s strategy. The three-arm study will allow head-to-head comparisons of both the combination and single agent lazertinib versus Tagrisso – a brave step considering that this agent has demonstrated a survival benefit.

“We want to be able to add value to what is already available… rather than just focusing on [Tagrisso] failures,” said Dr Joaquín Casariego, head of oncology for J&J’s Janssen unit in Europe, in an interview with Evaluate Vantage.

A weakness of the Mariposa trial is that the combination arm is open label, as opposed to the blinded TKI arms – presumably because of the difficulties of giving a sham intravenous therapy. And notably J&J is not selecting patients for cMet mutations, just EGFR.

cMet is known to be a driver of NSCLC tumours, specifically a variant known as exon 14 deletion, thought to account for 3-5% of these cancers. It is also involved in relapses, via cMet amplification, which can develop as a resistance mechanism to EGFR inhibitors.

By focusing only on carriers of an EGFR mutation, Tagrisso's record is ultimately what J&J will need to beat. And at Esmo the first amivantamab and lazertinib data were revealed, hinting at what the combination can achieve.

The Chrysalis study generated a competitive 36% response rate among 45 TKI-refractory patients, with one complete response, at a median follow up of four months. Even more impressively, all 20 patients who had received no prior treatment for their disease responded, all partial responses, at median follow up of seven months. 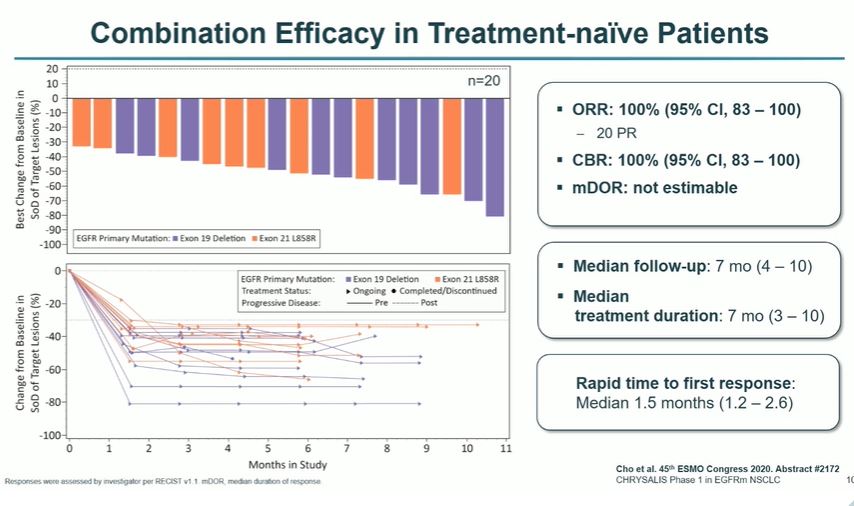 Amivantamab and lazertinib have been designed to block numerous resistance mechanisms to EGFR inhibition, which is ultimately why J&J believes the combination can improve response rates.

Lazertinib is described as a third-generation TKI with the ability to penetrate the CNS, and activity against primary and resistance EGFR mechanisms, including T790M. As well as cMet, amivantamab also acts against several activating EGFR mutations including exon 19 deletion and exon 20 insertion. A single-agent study is ongoing in this latter mutation, against which no agents have been shown to work.

“It is still not known whether cMet amplification is present from the beginning, or whether it is a secondary resistance. So there is a strong rationale to start treatment with a combination [of EGFR and Met],” Dr Marina Garassino, of the IRCCS National Cancer Institute of Milan, told Evaluate Vantage.

Dr Garassino also believes that by using a bispecific, which acts at the cell surface and has immune cell directing abilities, additional benefits will be seen over small molecule EGFR inhibitors.

Data from the ongoing Chrysalis trial, and eventually Mariposa, will be needed to confirm these theories. But with oral therapies now standard of care in several metastatic lung cancer settings, J&J will need to demonstrate substantial advantages to persuade physicians to reintroduce intravenous administration back into the front line.

AACR 2019 – Chi-Med has savolitinib filing in its sights