Expectations grow with more data on XMT-1536, but durability is still a key question.

Those waiting for definitive data on the durability of Mersana Therapeutics’ antibody-drug conjugate XMT-1536 will have to wait a bit longer.

The group reported updated results from the ovarian cancer cohort of its phase I trial at Esmo today, with numbers that look very similar to those presented at Asco earlier this year, albeit in a few more patients. Mersana’s stock doubled on the Asco data, and has jumped another third this week to a record high, giving the company a $1.6bn valuation.

Still, durability remains a the key question for XMT-1536, and here Mersana does not expect to have an answer until the end of the year. All that is known, for now, is that mean duration of response was not reached in seven patients deemed to be higher expressers of NaPi2b, XMT-1536’s target.

During a conference call today Mersana’s chief executive, Anna Protopapas, declined to disclose the duration of response so far in the overall ovarian cancer cohort, saying that the numbers were “too small to say much”.

On the same call the lead investigator, Dr Erika Hamilton of the Sarah Cannon Research Institute, played down the importance of duration of response in a single-arm study, claiming that the US FDA would focus on response rate.

However, she did provide a bar that XMT-1536 would need to cross at the year-end update, saying: “If we can reach at least four months' DOR, we’re in a good place.”

That might not seem like much, but XMT-1536 is being tested in a very late-line setting: patients who failed up to four previous therapies, some of whom are platinum resistant.

The current standard of care for this population is single-agent chemotherapy, and the prognosis is not good, with response rates of 4-12%, median progression-free survival of three to four months, and median overall survival of less than one year.

Dr Hamilton noted that a response rate of 25% would be clinically meaningful, and XMT-1536 exceeded this – today’s update detailed an ORR of 34% in 29 evaluable patients. The ovarian cancer cohort of the study has enrolled 47 patients in total. 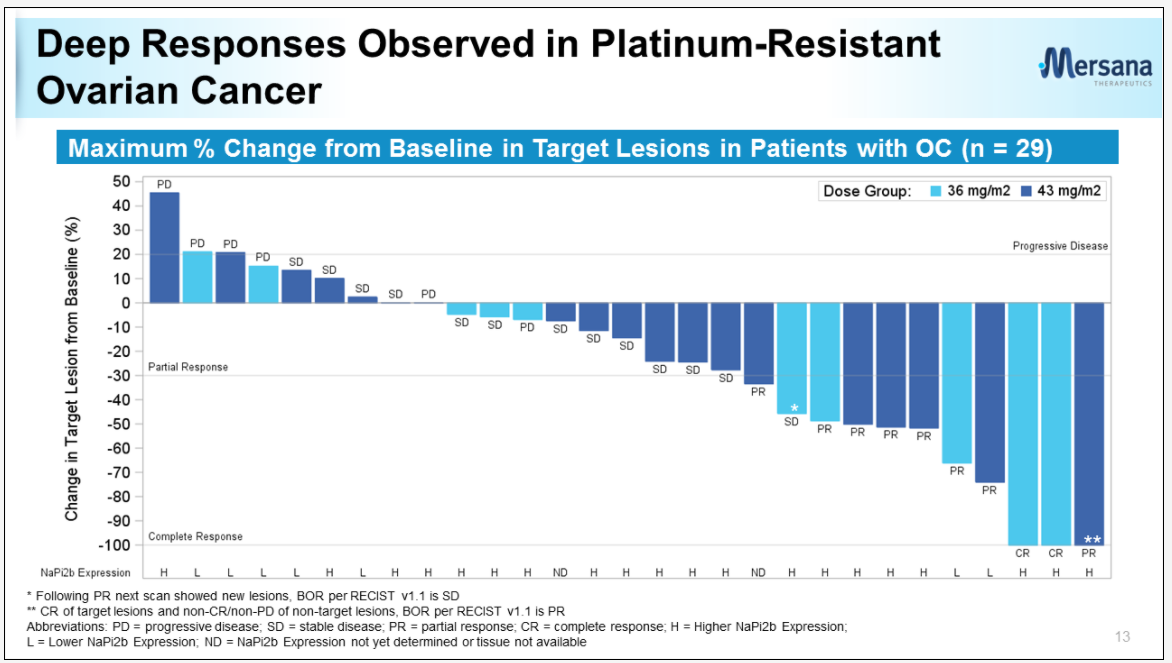 The number reported today is nearly identical to the 35% ORR, from 20 patients, that Mersana disclosed at Asco in June (Mersana makes the most of early data, May 28, 2020).

The Esmo update saw three more partial responses, taking the total to eight. There were also two complete responses in the trial, which had been reported previously.

It remains unclear how higher NaPi2b expressers were defined in the study, with Mersana refusing to disclose its cutoff point, saying it would define this once it had completed the dataset.

The NaPi2b-higher patients appear to do better, with most of the responses coming in this population. Around two thirds of patients in the study fall into the higher NaPi2b group, Ms Protopapas said.

Overall, XMT-1536’s efficacy continues to look similar to Roche’s NaPi2b-targeted ADC, RG7599 (lifastuzumab vedotin), which was abandoned a couple of years ago after showing disappointing durability.

However, Dr Hamilton pointed to toxicity concerns with lifastuzumab vedotin, including neuropathy and neutropenia, “which were dose limiting”. At least these do not appear to be an issue with XMT-1536. 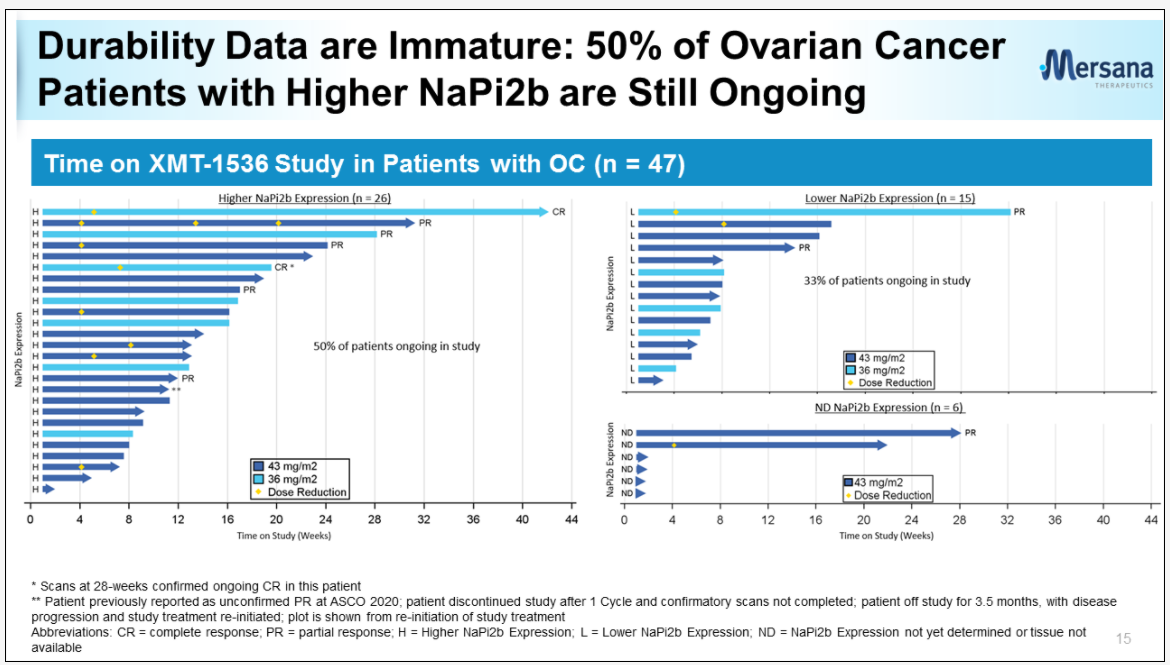