Esmo 2021 – Astra lays out a grand vision for Enhertu

But proving that the drug’s toxicities are manageable in the real world will become more important as it moves into earlier treatment settings.

Strong responses in heavily pre-treated cancer patients have emboldened partners Astrazeneca and Daiichi Sankyo to move Enhertu into earlier, and more valuable, treatment settings. Impressive new data at Esmo this weekend makes that decision look less risky, prompting equity analysts to bulk up sales estimates for a drug that was already expected to become a blockbuster next year.

But much still depends on the partners showing that rates of the antibody-drug conjugate’s biggest toxicity concern, interstitial lung disease (ILD) and the related pneumonitis, are controllable. Encouragingly, patients who have received fewer prior treatments seem to be less susceptible to ILD, Sunil Verma, head of breast cancer research at Astrazeneca, tells Evaluate Vantage – a finding that could help build hopes around a first-line push for the Her2 targeting agent.

Rates of ILD in the second-line Destiny-Breast03 trial, which was unveiled at Esmo this weekend to great fanfare, were considerably lower than in previous later-setting trials of Enhertu. Mr Verma says that it is hard to know whether it is disease burden or the prior therapies that leaves patients more likely to develop the potentially fatal lung condition.

“But I think what we can say is in earlier lines with less heavily pre-treated patients, and with appropriate interventions, patients can have zero risk of grade four and five [ILD],” he said.

In clinical practice this will depend on physicians following certain protocols that Astra and Daiichi have been promoting, which help diagnose ILD early and keep it under control, Mr Verma says. He believes this has helped drive rates lower in clinical trials. Grade 1 is the mildest form and mostly a radiological finding, at grade 2 symptoms appear and patients must stop Enhertu treatment, while grade 5 is death from the condition.

Tumour type does not appear to change a patient’s susceptibility to ILD, Mr Verma says, adding that lung cancer might be a special situation.

“I think many of the learnings [on ILD] can be applied across the cancer continuum, but there may be unique situations that we have to consider such as prior immunotherapies, and the underlying function of these patients with different tumour types,” he says. 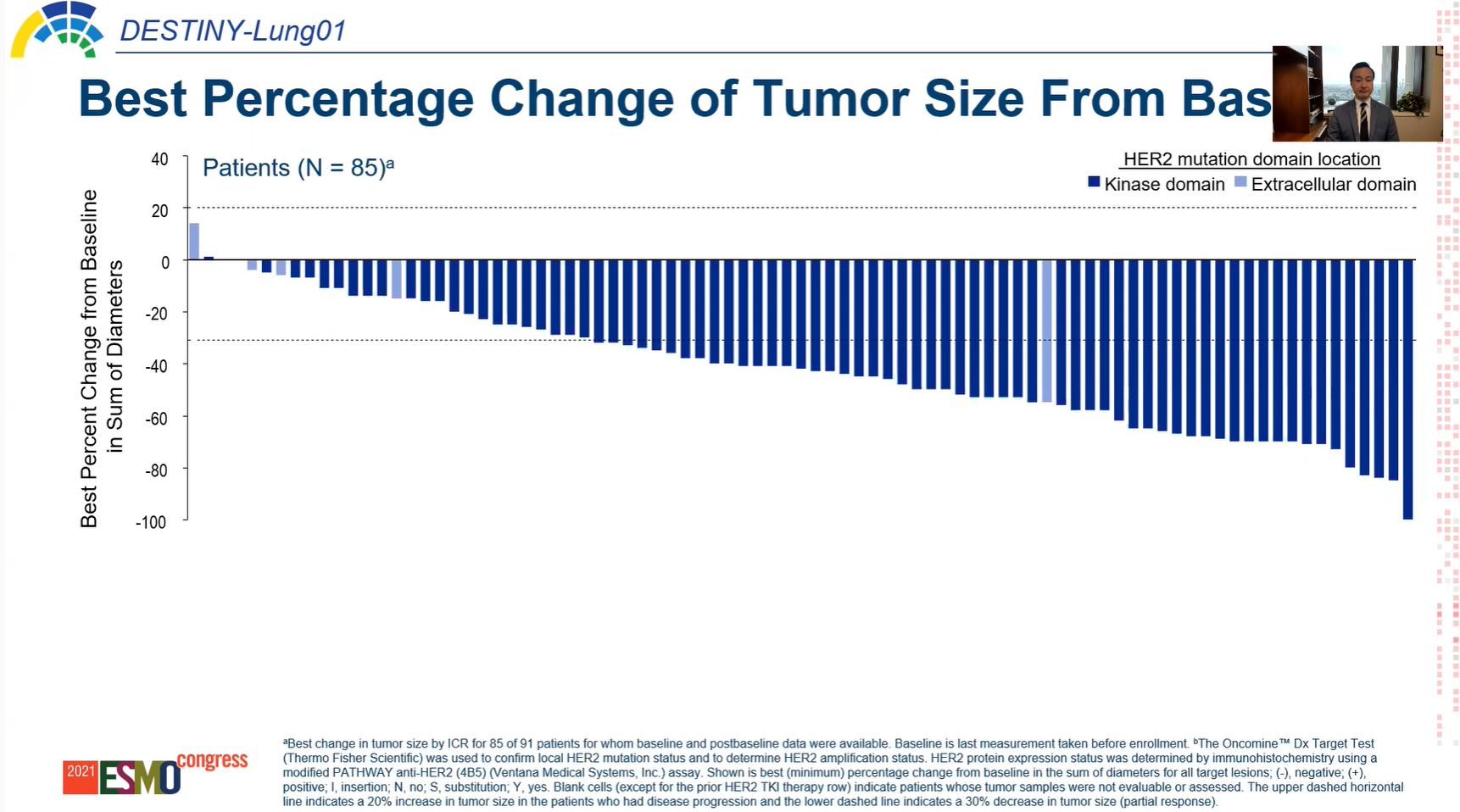 After Destiny-Breast03 new data in Her2-positive lung cancer was probably Enhertu’s biggest reveal at Esmo. The 55% response rate in Destiny-Lung01 is the highest ORR to be reported among trials in similar settings, the conference heard, but this came with a sting in the tail: of the 91 patients on whom data were reported, ILD caused two deaths and an almost 30% discontinuation rate, even though 75% of the cases were adjudicated to be low grade.

With a median of two prior treatments and some having had up to seven, this was clearly an advanced patient group who, according to Mr Verma’s reasonings, might be expected to suffer high rates of ILD. Dr Bob Li of MSK Cancer Centre in New York, who presented the data at Esmo, said that both patients in the trial who died had undergone lobectomy and both had received checkpoint inhibitor therapy just before enrolment into Destiny-Lung01.

He added, however, that no clear association between immune checkpoint inhibitor use and pneumonitis had been seen across the trial, the small number of patients notwithstanding. This will be important to confirm considering how widely immunotherapy is being deployed across cancer types, particularly lung cancer.

“We’re conducting a meta-analysis of all clinical trials of multiple diseases with [Enhertu], and so far we have not found an association with IO. We’re also looking at other risk factors, including racial ethnicity and geographic differences – there seems to be an increased risk of pneumonitis in Japanese patients. But there are a lot of unanswered questions and we still need to pay more attention to early detection,” he told the conference.

Astrazeneca has started talking to regulators about the Destiny-Lung01 data, company executives said at an investor event following Esmo. No Her2-targeted agents are approved in lung cancer – Enhertu has breakthrough therapy designation here – and hopes are high that an accelerated approval will quickly follow any filing.

A first-line lung study is about to start. However this is a rare tumour type, with Her2 driving only 3% of cases of nonsquamous NSCLC. Breast cancer is the big prize, and Astrazeneca is conducting four trials of Enhertu, as monotherapy or in combination, in first line and perioperative settings.

The goal is clear: to best Roche’s vast Her2 targeting franchise. Having comfortably beaten the Swiss group’s rival ADC Kadcyla in Destiny-Breast03, Herceptin and Perjeta are the next in Enhertu’s sights. Astra’s Mr Verma does not mask his expectations here.

“We're going all in to see if we can really transform metastatic breast cancer into a prolonged chronic disease and, hopefully for some patients, a cure,” he says.

In first-line breast cancer “we have high confidence, based on all our data, that we can beat [Perjeta and Herceptin].” In the neoadjuvant or pre-surgery setting the best pathological complete response rates are between 60% and 65%, he says. “And given the magnitude of response that we're seeing [in later settings] we think we can go much higher.”

Mr Verma is also confident that Enhertu will impress in the next set of new data expected to emerge, from Destiny-Breast04, conducted in patients with low Her2 expression. The study will provide an important test of the drug’s potence.

The sellside is sharing Astra’s clear excitement about Enhertu. Consensus for global sales in 2026, which are booked by Daiichi, currently sits at $4.1bn. But this could rise by some magnitude in the coming months – Leerink, for example, doubled its peak forecast for sales booked by Astrazeneca to $1.8bn in the wake of Esmo.

For these lofty expectations to be met, the partners need to show that ILD rates can be kept in check, in the clinic and in practise. But it seems like in Enhertu, the real potential of antibody-drug conjugates could finally be on show. 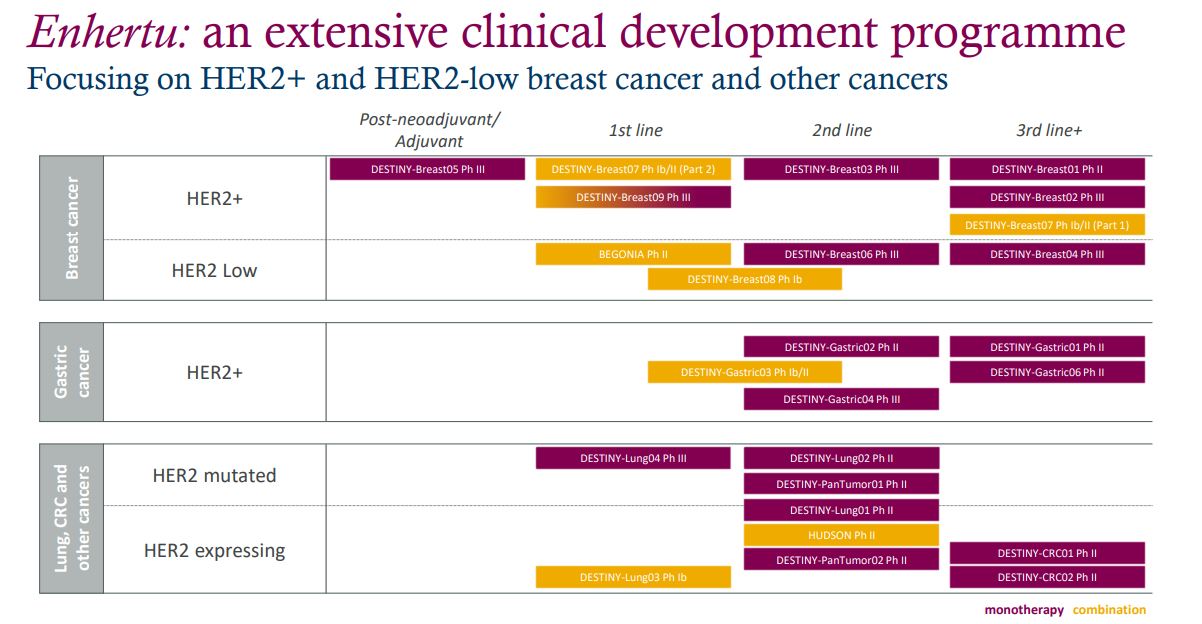