But unimpressive phase 2 results, plus a lack of a placebo control arm, raise questions.

A year ago Sarepta’s Duchenne muscular dystrophy gene therapy SRP-9001 failed to beat placebo in a phase 2 trial. Now the company hopes that updated findings from the same study will support accelerated approval – but these compared SRP-9001-treated patients against external controls, rather than placebo.

It was these results, presented at the JP Morgan meeting yesterday, that sent Sarepta’s stock down 11%, the main disappointment being the small benefit seen with SRP-9001. As such, it seems entirely possible that the FDA will want to wait for results from an ongoing pivotal trial before considering the project for approval.

Unlike with some of Sarepta’s previous projects, placebo-controlled data should come soon enough: the phase 3 Embark study of SRP-9001 is set to complete enrolment in mid-2022 and read out next year.

In the meantime, Sarepta hopes that a “totality of the evidence” argument might win out, especially considering the progressive and life-threatening nature of DMD.

A year ago the first part of the phase 2 trial in question, Study 102, failed to show a difference between SRP-9001 and placebo on the primary functional endpoint, North Star Ambulatory Assessment (NSAA) score at 48 weeks (Gene therapy trial fails to rectify Sarepta’s sorry record, January 8, 2021).

Yesterday, Sarepta reported data from part two of the same trial, in which 21 patients originally randomised to placebo crossed over to SRP-9001. Results of this group were compared against an external control cohort, constructed from three separate studies.

The group’s chief executive officer, Doug Ingram, was at pains to explain that the design of part 2 had been prospectively defined and submitted to the FDA, and that the external subjects had been “rigorously matched” with the Study 102 patients.

Sarepta’s second attempt with Study 102 was better than its first: the crossover patients showed a 1.3-point improvement in the NSAA from baseline, versus a 0.7-point decline with the external controls. The company claimed statistical significance with a p value of 0.0009. 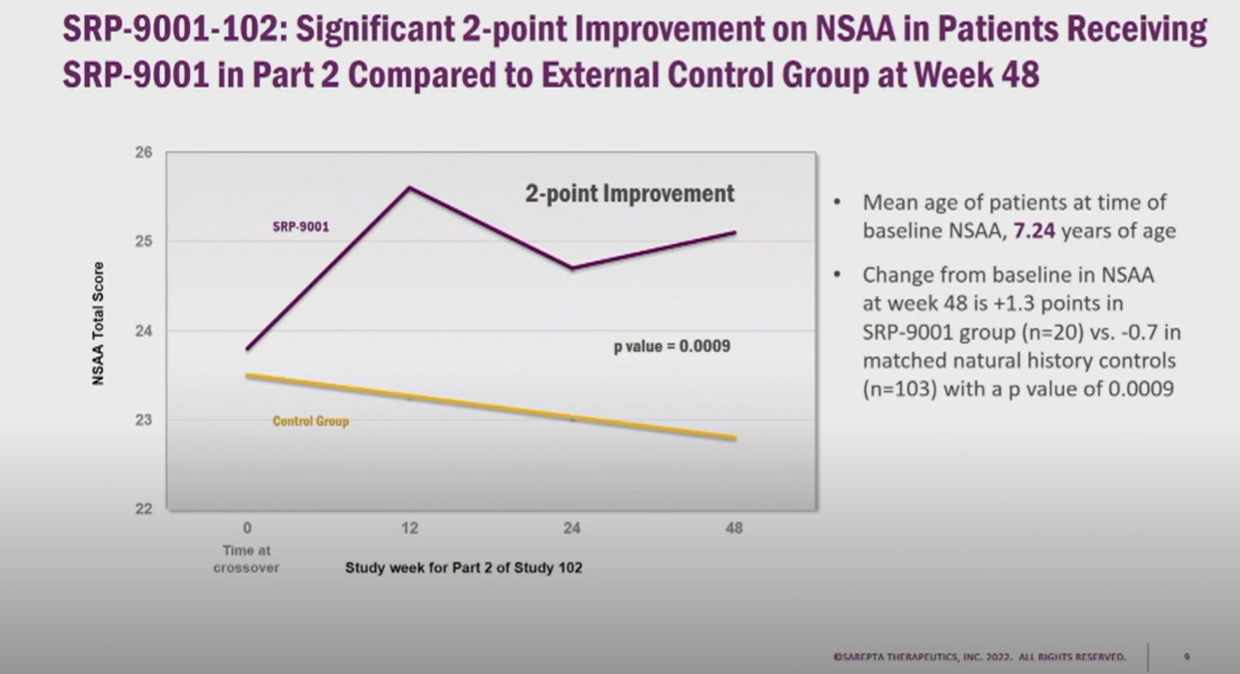 Given the failure of part one of the study it is unclear whether this will be enough for regulators. The magnitude of benefit seen in part two could also raise questions: Leerink analysts had hoped for a 2.5-3.5-point difference between the crossover patients and external control.

Sarepta had blamed the failure of part one of the trial on the fact that older patients, aged six or seven, had not been well matched in terms of baseline NSAA, leading to fitter patients in the placebo arm. It previously claimed a statistically significant benefit in patients aged four or five, but this can only be considered exploratory given the primary endpoint fail.

Yesterday, Sarepta presented two-year data on these younger part one subjects, which appeared to show ongoing benefit. Results from the older patients were conspicuous by their absence, with Sarepta disclosing only that NSAA scores across all patients “remained stable” at two years. Mr Ingram promised more data at an upcoming medical meeting.

All the updated Study 201 data, along with results from the four-patient Study 101 and six-month data from Study 103, of commercial-grade SRP-9001, are intended to support the accelerated approval.

But Embark will be the big test. Mr Ingram talked up the prospects of the pivotal study, saying the strict inclusion and exclusion criteria around both NSAA and another measure, time to rise, should reduce heterogeneity and increase chance of success.

Hopefully this means that the group will not have to resort to subgroups and external control cohorts to get a win here. 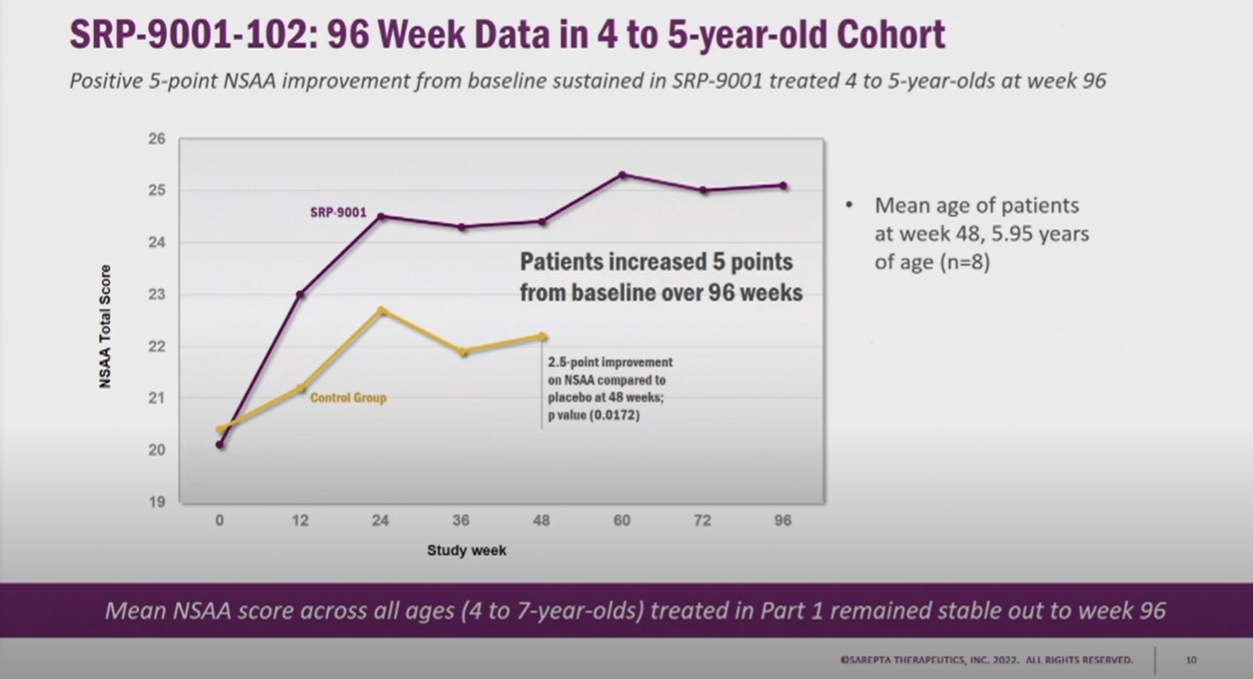