Barring Enhertu’s Destiny-Breast04 readout the biggest buzz of the recent Asco conference was generated by an academic-sponsored trial of Jemperli in rectal cancer. This is to say that many doctors and the generalist press were extremely excited; as for the pharma industry, including Jemperli’s maker, GSK, the response has been... virtual radio silence.

There are several complex reasons for this disconnect, but the data suggest that PD-(L)1 blockade could change clinical practice here: the headline number at Asco was that every single patient treated so far had gone into sustained remission. Yet extending Jemperli’s use into this setting could actually be a commercial non-starter.

In a sense the central question is whether pharma is about doing the best for patients, as company straplines often insist, or whether it exists primarily to generate profits. GSK told Evaluate Vantage that it was “very encouraged by the data presented at Asco and what this could mean for patients with locally advanced rectal cancer, who potentially can avoid life-altering surgery through treatment with [Jemperli]”.

But the glaring fact remains that the Jemperli study in question is being conducted by Memorial Sloan Kettering Cancer Center (MSKCC), and GSK did not even press release the late-breaking presentation of its results on June 5.

Early-stage rectal cancer patients are typically treated with chemo and/or radiotherapy, and then undergo surgery. The MSKCC study sought to explore Jemperli’s effect on delaying or even eliminating some of these current treatments, but specifically in mismatch repair-deficient (MMRd) rectal cancer in the neoadjuvant setting.

The data were staggering. MSKCC’s Dr Andrea Cercek, at times fighting back tears, told Asco that all 14 patients completing six months’ Jemperli went into complete remission. The Asco presentation called Jemperli a “curative-intent therapy”, and for good reason: no patient has had to have any surgery, chemo or radiotherapy.

All the CRs are ongoing at a median 6.8 months’ follow-up, with four over two years’ duration. A further four patients have yet to complete six months’ treatment, but all are already responding, one with a CR. Dr Cercek said her team had determined 25% ORR to be the baseline for relevance – a null hypothesis that Jemperli clearly blew out of the water. 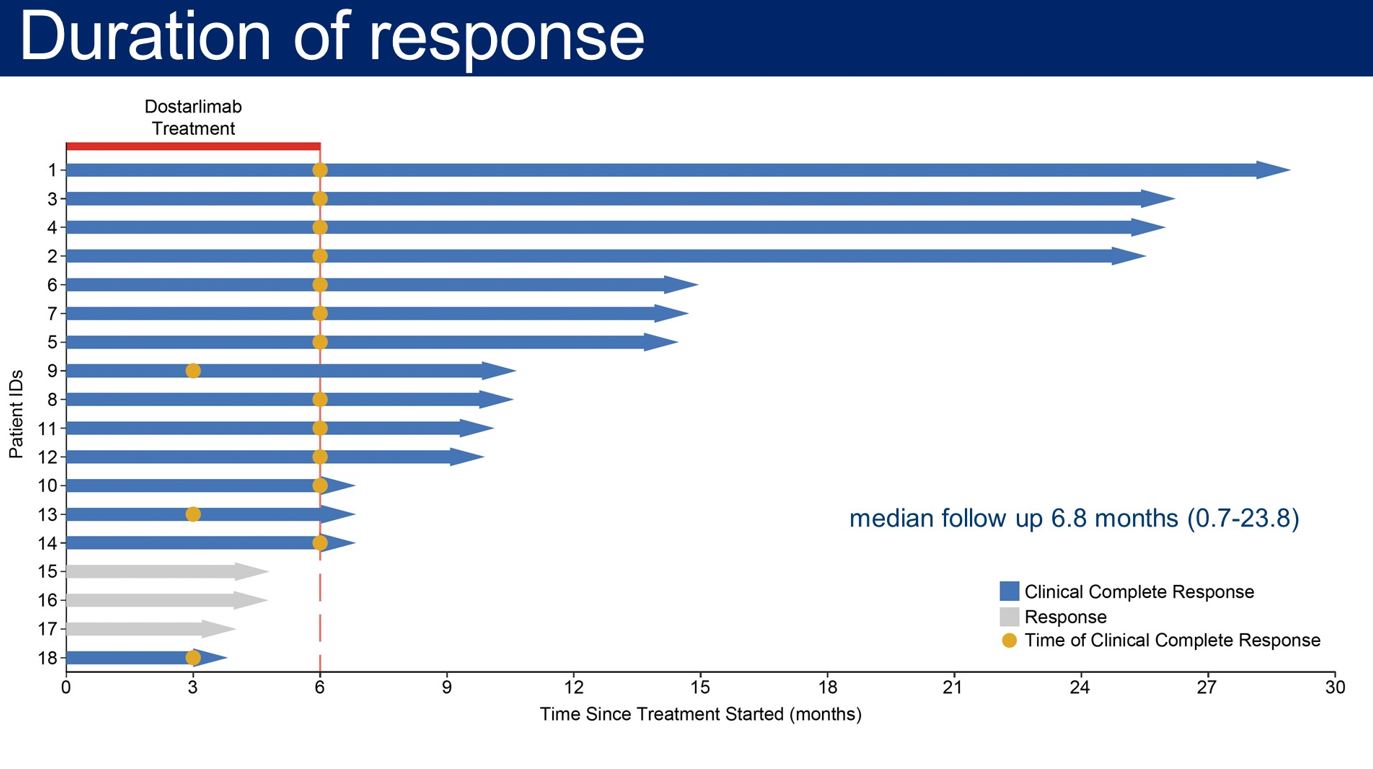 However, there appears to be no biopharma involvement with PD-(L)1 immunotherapy in the neoadjuvant MMRd setting. Evercore ISI analysts reckon the best comparator for MSKCC’s study is the six-week Niche trial of neoadjuvant Opdivo plus Yervoy, which yielded a 100% ORR in MMRd colorectal cancer. This was run by the Netherlands Cancer Institute.

Clinicaltrials.gov reveals some perioperative work with anti-PD-(L)1s in colorectal cancer, all academic-sponsored. One apparently similar trial to MSKCC’s got under way just last month, testing Tracon/Alphamab’s envafolimab as neoadjuvant immunotherapy in MMRd colorectal cancer; it is sponsored by China’s Sun Yat-Sen University.

Of all companies, it is perhaps not GSK but Merck that is best-placed to take up the challenge of neoadjuvant MMRd rectal cancer, given Keytruda’s front-line label. But Merck is, like GSK, non-committal; asked by Vantage it acknowledged MSKCC’s study, and would only say it was “constantly evaluating ... studying the role of Keytruda in earlier stages of disease”.

What might be the reasons behind pharma’s apparent lack of interest? An obvious question is how big this market might be; Dr Cercek said 5-10% of rectal cancers were MMRd, amounting to 40,000-75,000 patients globally, but it took MSKCC 29 months to enrol just 18 of them.

The MSKCC data might still be seen as inconclusive given the relatively short follow-up, the lack of survival numbers, and the fact the study was conducted at a single centre that boasts significant expertise.

Perhaps the biggest issue is that single-cohort data alone would not suffice for approval on the one hand, but it might be hard to design a controlled study on the other. Such a trial would naturally be expected to have chemo/radiotherapy and surgery in the control arm, but could be confounded by doctors using PD-1s off label.

At Asco the study’s discussant, Dr Kimmie Ng of Dana-Farber, said “off-protocol use of neoadjuvant immunotherapy [was] likely after publication of these results”, a view that nevertheless ignores the lack of reimbursement for off-label therapy.

GSK said it looked forward to working with Dr Cercek to expand the clinical study in this neoadjuvant setting. Dr Ng told Asco that the results were clinically meaningful and scientifically plausible. As for whether they were practice changing she said “not yet”.