Data on the company’s pacemaker-neurostimulator combo are probably good enough to permit further development – but first the company wants to hook a partner.

Renal denervation is not the only approach to treating hypertension by disrupting the nervous system. The BackBeat cardiac neuromodulation therapy developed by Orchestra Biomed is intended to limit blood pressure by reducing the volume of blood filling the patient’s ventricles, and data presented at TCT at the weekend are promising.

The results concern 47 patients enrolled in the first cohort of the Moderato II study. These patients were indicated for a pacemaker, but also had hypertension that was not controlled with drug therapy.

All patients received the Moderato implant, which delivers standard pacing as well as the BackBeat neuromodulation therapy. Patients in the control group received the pacing, but the BackBeat capability was not switched on. All patients continued taking their antihypertensive medications. 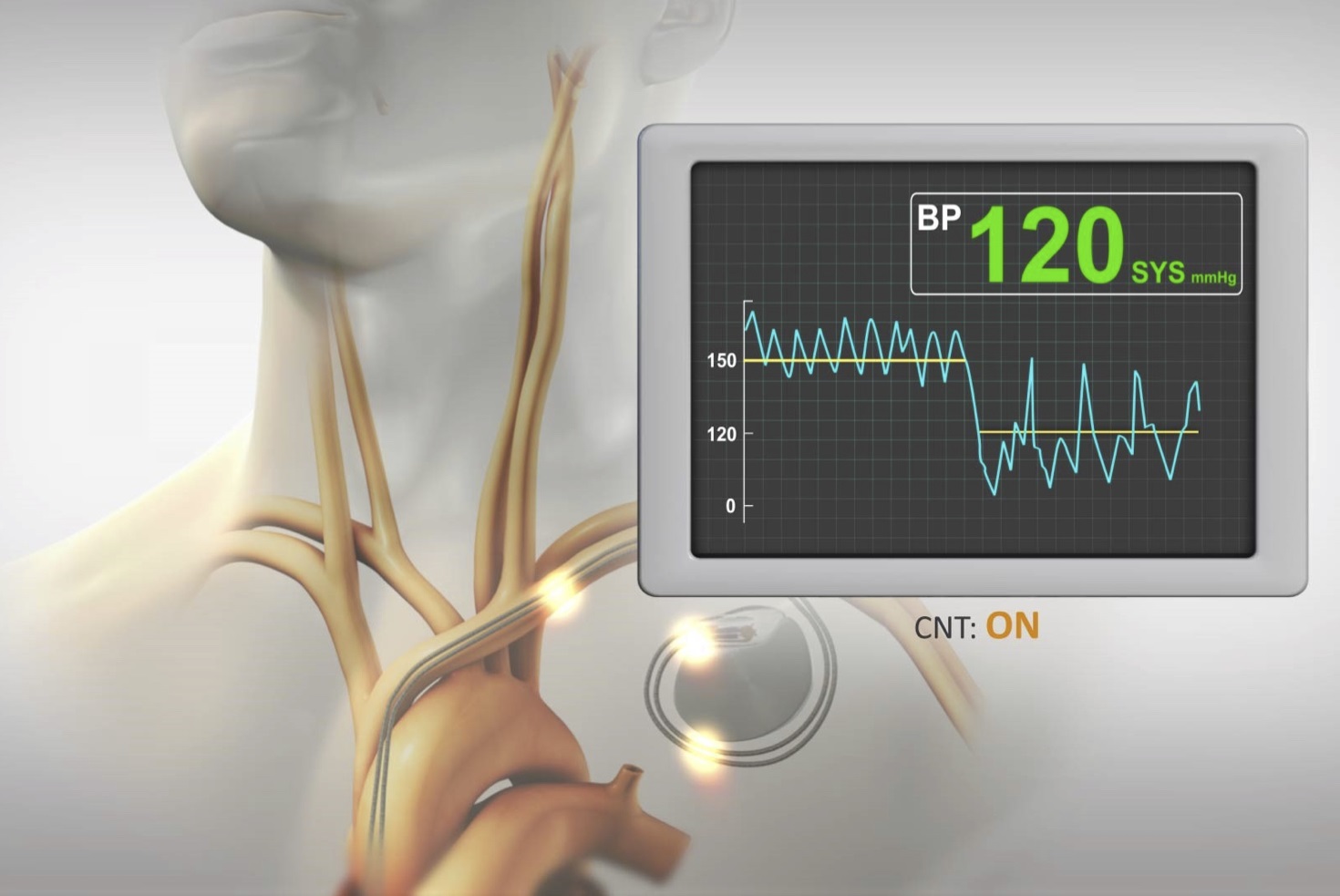 Patients randomised to BackBeat therapy had an 11.1mmHg reduction in mean 24-hour ambulatory systolic blood pressure at six months follow-up, versus a 3.1mmHg reduction in the control group. The 8.1mmHg difference between the two groups was statistically significant at p=0.01.

The study also met its primary safety endpoint, with no major cardiac adverse events in the BackBeat CNT group and three events in two patients in the control group.

The word is on the street

The data on the BackBeat therapy compare reasonably well with what has been achieved with renal denervation – Medtronic’s Symplicity Spyral lowered 24-hour ambulatory blood pressure by an average of 8.9mmHg at three years post-treatment in its European registry, though the different timings and patient populations mean the comparison is only illustrative.

Still, the Moderato II data are probably good enough for Orchestra to move straight to a US approval trial rather than enrolling the optional second cohort of up to 140 patients in Moderato II.

But the company wishes to form a partnership before beginning pivotal trials. Collaborations, common in biopharma, are more unusual in medtech but Orchestra is committed to this approach, having partnered with Terumo on its other product, a sirolimus-eluting balloon called Virtue.

“Ultimately with BackBeat we intend to form a partnership, or potentially multiple partnerships, with established leading cardiac rhythm management companies that are selling pacemakers,” says Mr Hochman. The Moderato device and BackBeat technology were recently CE marked for sale in Europe, but the group is waiting to find a collaborator before launching it.

“It will be a much faster path to making this therapy available broadly if we work with large established commercial leaders in the cardiac rhythm management space to do so,” he adds. “This therapy is an ideal candidate for this type of strategic partnership since it can be readily incorporated into existing devices.”

It will be interesting to see whether the TCT data catch the eye of a big pacemaker developer. Medtronic has devoted a lot of effort and cash into bringing its renal denervation tech to market, so perhaps would be reluctant to buy into a rival hypertension device. Abbott or Boston Scientific might be likelier partners.

There is certainly a commercial rationale. Over a million pacemakers are implanted worldwide each year, and the annual market comes to around $4.5bn. Hypertension is prevalent in this population – more than 60% have uncontrolled blood pressure despite medical therapy.

“The technology has been commoditised,” Mr Hochman says. “The pacemaker business hasn’t been growing, the average selling price of devices has been fairly flat or declining.” BackBeat, he says, could offer differentiation to a pacemaker developer, allowing premium pricing and a strong case for reimbursement.

“Orchestra was really founded to focus on these high-impact therapies like BackBeat and Virtue, but to also to advance the business model construct of collaboration between innovation companies like ours and large established commercial leaders,” Mr Hochman says.

If Orchestra does find a partner, the US pivotal trial could start in late 2020, potentially putting approval in the 2022 timeframe. Without a partner this would presumably take longer.

The company is reasonably assured from a financial standpoint, having raised $34m in a series B-1 round in July and $41m in November 2018; on top of that the Terumo deal came with a $30m upfront fee.

Perhaps this will give Orchestra the leeway to wait for the right partner rather than having to seize the first opportunity. After that, there is just the small matter of succeeding in the pivotal trial.

ESC 2022 – Preventicus gets halfway there