Like AMG 510, MRTX849 yields partial responses in some lung and colorectal tumours, but investors could have expected better.

First the good news: Mirati’s MRTX849 is not clinically inert. Results just unveiled at the Triple meeting – the first ever disclosure of clinical data for MRTX849 – show partial remissions in some lung and colorectal cancer patients given the KRAS G12C inhibitor.

But whether this is enough to sustain the bull wave that has maintained the group’s valuation at around $3bn is a much harder question to answer. Until now hopes had been driven by Amgen’s more advanced rival, AMG 510, but on a cross-trial basis it is difficult to see MRTX849 showing anything other than comparable activity.

No doubt analysts will now spring into action to defend Mirati. The sellside’s tactic has been to play up AMG 510’s promising efficacy as suggesting what MRTX849 might be capable of, while turning Amgen’s more recent disappointing data into a win on the basis that Mirati now had an easier target to beat.

The Triple (EORTC-NCI-AACR) meeting today heard that partial remissions have been seen in three of six NSCLC subjects given MRTX849, and in one of four colorectal cancer patients. 12 of 17 total subjects are evaluable, and there were no responses in the further two appendiceal tumour patients.

It was also disclosed that Mirati has settled on a target MRTX849 dose of 600mg twice daily. So far it has escalated up from 150mg once daily, and says a maximum tolerated dose has not been reached, though a 1,200mg once-daily regimen, given as 12 capsules, proved intolerable; Amgen’s target AMG 510 dose is 960mg once daily. 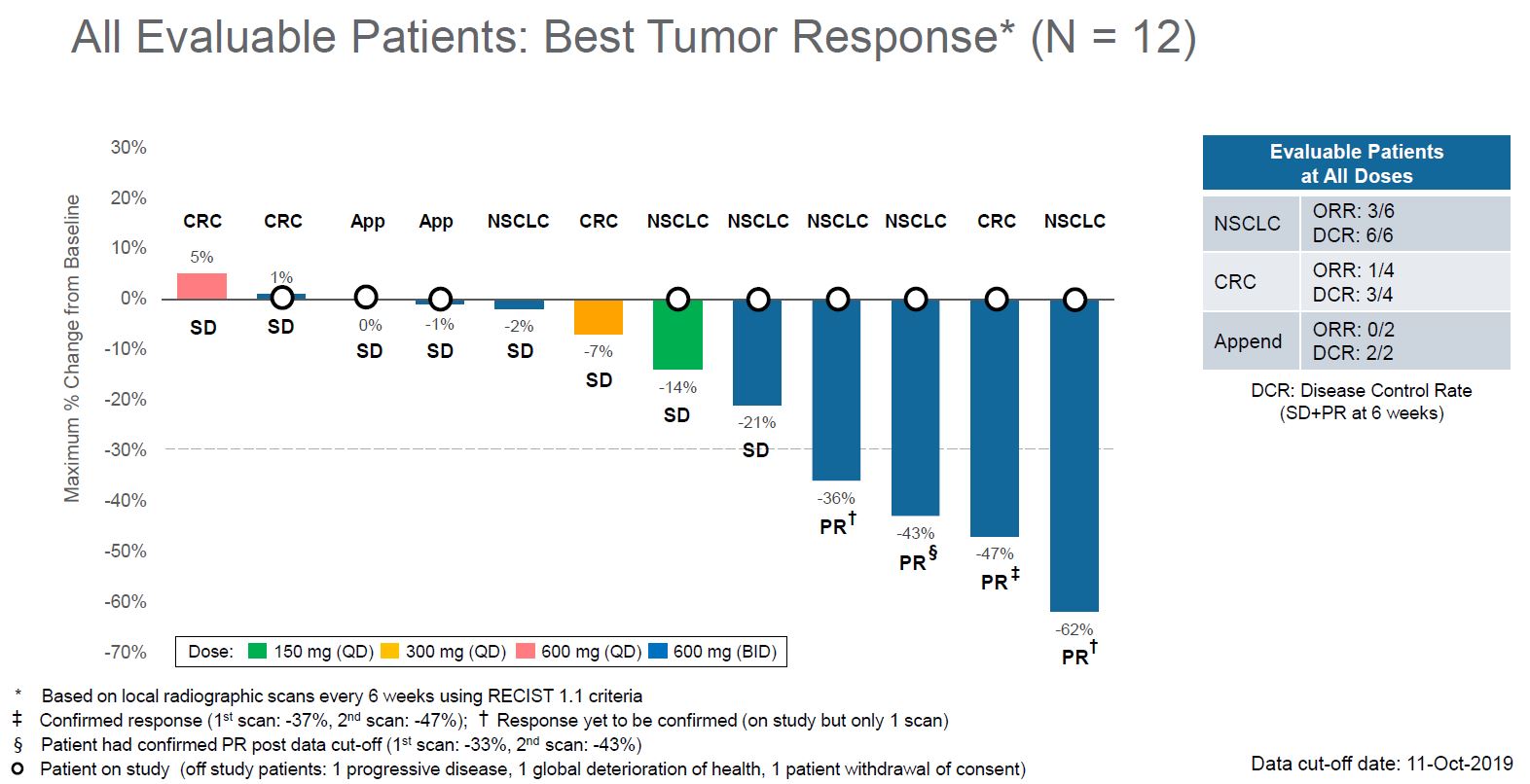 All four partial remissions reported in the Mirati study were seen with the 600mg twice-daily dose. Perhaps the most significant cut of this dataset is the overall remission rate across all nine subjects given this target dose: 44%.

And here is where the problem lies. On a straight cross-trial basis it is hard to see the Mirati data being anything other than in line with Amgen’s: at the last announcement the 960mg once-daily AMG 510 dose had yielded a partial remission rate of 54% in NSCLC and 8% in colorectal cancer (Esmo 2019 – Kras springs a leak, September 28, 2019).

Like with AMG 510, not all of the remissions seen with MRTX849 have been centrally confirmed: the one in colorectal cancer has been, but the NSCLC remissions are all by investigator assessment only, though one was confirmed after the October 11 data cut-off.

Presenting the results at an embargoed press call today Dr Pasi Jänne, of Dana-Farber Cancer Institute, said the subjects with unconfirmed responses were still on study, so these can be confirmed later. But he accepted that it was too early to say whether one dataset was better than the other, commenting: “It’s encouraging that both [AMG 510 and MRTX849] are showing clinical activity.”

The problem for Mirati is not that it has generated poor data, and in isolation its results would have been hailed as a promising, if not overwhelming, early sign of efficacy. A $3bn valuation, however, had baked in something rather more impressive.

Triple meeting – Mirati gets an edge over Amgen