The first look at Turning Point’s TPX-0022 shows signs of activity beyond cMet inhibitors’ proven use in lung cancer.

Turning Point Therapeutics is keen not to become a one-trick pony focused on repotrectinib, and a late-breaker at the EORTC-NCI-AACR symposium on Saturday helped build its case as a broad player in targeted therapy for cancers driven by specific genetic mutations.

The findings related to the first human data with TPX-0022, an inhibitor of cMet, a space that already features marketed drugs. However, TPX-0022 hits two additional kinases involved in tumour resistance, and to back Turning Point’s claim of improved potency it has shown activity beyond competitors’ primary focus of lung cancer.

The key cMet players target NSCLC driven by a genetic variant called the exon 14 skipping mutation: here Incyte/Novartis’s Tabrecta was approved in the US in May; Merck KGaA’s tepotinib was filed with the FDA under priority review for the same use in August, and is already available in Japan.

Turning Point’s phase I Shield-1 study, however, enrols patients with various cMet genetic alterations, irrespective of cancer type. Thus Saturday’s most important finding was partial remissions seen in all three gastric cancer subjects; PRs were also seen in one of four colorectal cancer patients and in one of eight with NSCLC.

The data are very early – only five subjects have more than 15 weeks’ follow-up – and only three of the five responses have been confirmed by central review. But they were enough for Turning Point to launch a $400m secondary equity offering before the markets opened this morning. 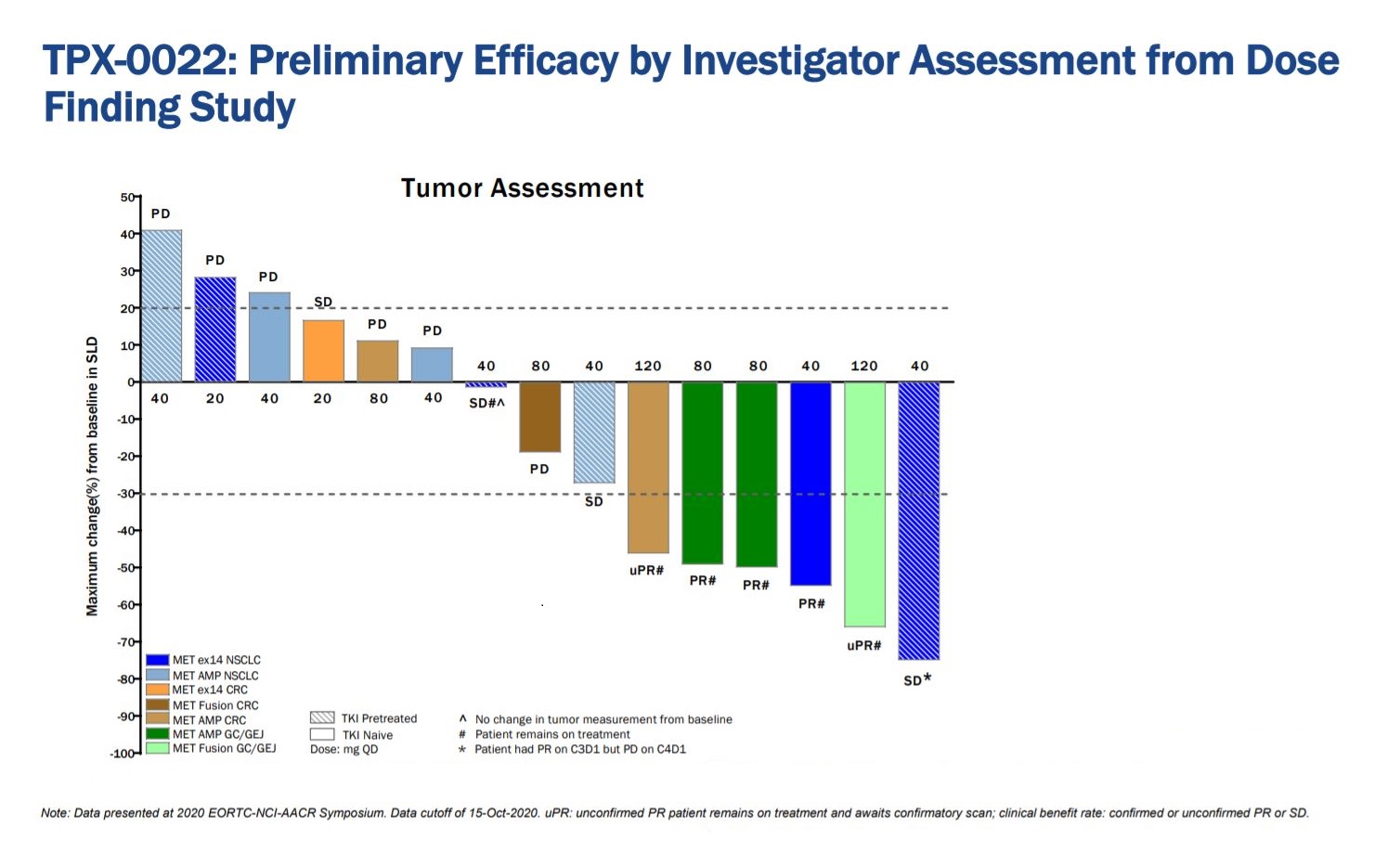 Tepotinib’s Vision study showed a 7% rate of oedema, and 11% of patients discontinued treatment owing to adverse events. A third competitor is Chi-Med’s savolitinib, whose Tatton trial revealed one death due to acute kidney injury that was deemed possibly related to treatment.

There is additional nuance to the Shield-1 efficacy data. All the responses occurred in patients naive to tyrosine kinase inhibition, and there were none in the five NSCLC subjects who had progressed on targeted small molecules. However, the biggest tumour reduction was in a pretreated NSCLC patient, who responded but quickly relapsed.

The settings are important, at least judging by the evidence in lung cancer. Exon 14 skipping occurs in 3-5% of newly diagnosed NSCLC, but cMet amplification can separately develop as a resistance mechanism to EGFR inhibitors like Iressa or Tagrisso. 3-5% of gastric cancers might be driven by cMet amplification, Turning Point says.

In the five Shield-1 study responders the NSCLC case was an exon 14 skip, while the colorectal and two gastric cancer responders had cMet amplification; the third colorectal subject had a cMet fusion. As well as hitting cMet TPX-0022 inhibits SRC and CSF1R kinases, potentially preventing drug resistance and tumour progression.

Turning Point plans to add a registrational phase II portion to Shield-1, starting in the second half of 2021, and it will be interesting to see if it pursues cMet broadly or focuses on specific sub-mutations.

While Tabrecta and tepotinib primarily target exon 14 skipping NSCLC irrespective of therapy line, Chi-Med opted for second-line use as its route to market, but this has stalled in the US, where the company has fallen behind its two competitors. Turning Point hopes to follow Chi-Med in separately planning to study TPX-0022 with an unnamed EGFR inhibitor in EGFR-relapsed NSCLC.

Additional pipeline assets Turning Point is now highlighting include TPX-0046, a Ret inhibitor to rival Roche/Blueprint’s Gavreto and Lilly’s Loxo-derived Retevmo, and TPX-0131, which will take on the competitive Alk-mutated NSCLC space.

With questions abounding over how much of Turning Pont’s valuation hinges on repotrectinib, which has yet to show convincing durability data, seeing this asset overshadowed might be no bad thing.

AACR 2019 – Chi-Med has savolitinib filing in its sights

Cyramza takes on Tarceva, but Tagrisso is the real opponent