Impressive results in lung cancer with Eli Lilly’s Ret inhibitor set the stage for approval next year, but Blueprint is not far behind.

Eli Lilly is not known for its big M&A moves, so the decision to spend $8bn on Loxo Oncology earlier this year was presumed to foreshadow some impressive results from the developer of targeted cancer drugs. Phase II data unveiled today on Loxo-292, in Ret-driven lung cancer, certainly look good enough to get the project on the market next year.

Whether Lilly will recoup the cost of the Loxo acquisition is another question entirely, of course, and this partly depends on how a rival project from Blueprint Medicines shapes up. The US biotech also intends to head to the FDA with its Ret-targeting asset, Blu-667, in the coming months, although Blueprint has yet to release a huge amount of data on the candidate.

For now, Lilly can be content with the performance of Loxo-292, or selpercatinib, which generated a 68% overall response rate in previously treated, Ret-driven non-small cell lung cancer. Ret fusions are thought to account for up 2% of cases of NSCLC. The Libretto-001 trial also included a treatment-naïve cohort, in which the ORR reached 85%, though the small number of subjects means that this result could change.

Other measures also reinforce the activity of selpercatinib. In the pre-treated patients, median progression-free survival had reached of 18.4 months while duration of response had tipped over 20 months, although again these are very early cuts of the data that, again, could shift. 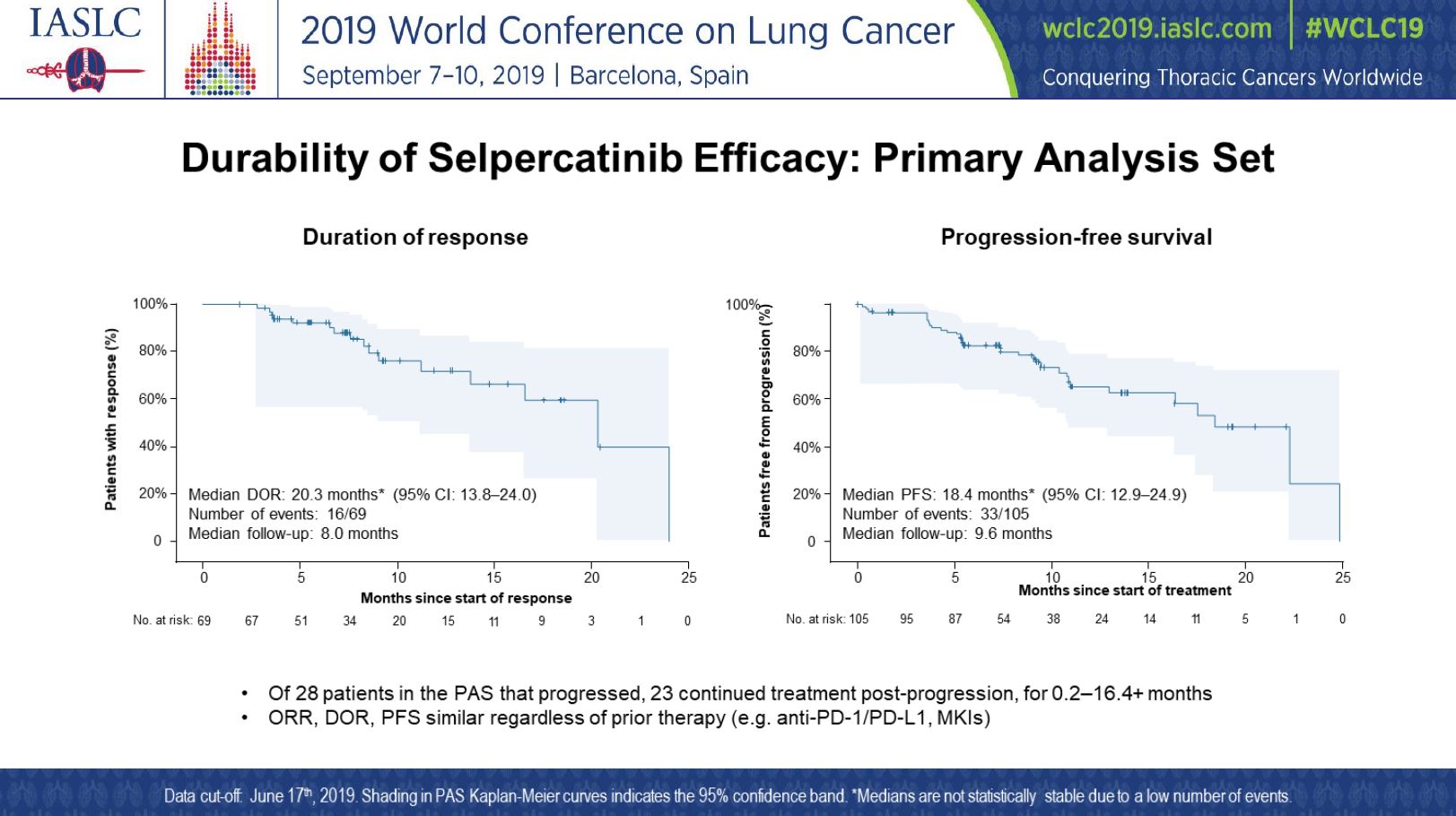 The strength of the data overall will raise hopes that regulators might grant selpercatinib approval in both front-line and previously treated patients. The sellside has already pencilled in sales of $609m in 2024 for the project, according to EvaluatePharma, and that figure could now rise.

What this all means for Blueprint is unclear, and it is probably it too soon to declare Lilly the winner here. With the usual caveats of cross-trial comparison, little evidence has emerged so far of hugely important differences between the agents. An update at Esmo on thyroid cancer is due from selpercatinib, which will add to the picture for the Lilly agent.

However Blueprint declined to confirm to Vantage when it would be releasing the next data cut from the Arrow trial. Investors will be hoping for a look in November, when the company is holding an R&D day.

Analysts at SVB Leerink who cover Blueprint wrote today that they do not expect the Ret-targeting market to be a “winner takes all” situation, with room for multiple agents potentially addressing different resistance mutations and/or patient baseline toxicities. Assuming the datasets remain similar this could well be true, although a big marketing partner would surely have to emerge for Blu-667, now called pralsetinib, if the playing field is to be truly level.

Both Loxo and Blueprint have said they plan to start phase III trials of their respective agents in first-line Ret-driven lung cancer before the end of the year. Blueprint is also in the process of expanding the enrolment target for the Arrow trial’s treatment-naïve NSCLC cohort, so investors could get a better look at this project’s potential in this setting before the pivotal study reads out.

In an interesting aside, the discussant of the Libretto-001 study at World Lung today raised the question of whether it is still necessary to run randomised phase III trials of oncogene-targeted therapies against chemotherapy, a proposal that gained support from some prominent lung cancer doctors on Twitter.

It is hard to see regulators backing such a bold proposal at this stage, although this is certainly a theme that investors will want to track. The field of targeted small molecules is a huge area of research for several small cancer drug developers; as well as Blueprint, companies like Turning Point, Deciphera and Mirati are working in this field.

But in the Ret-inhibition space, it looks like Lilly will be first to market. And the pharma giant is certainly capable of making the most of this lead.