The data are positive, but might not do much for the company’s sales.

Full data from the 12,000-patient trial of Oncimmune’s lung cancer blood test EarlyCDT-Lung, presented this morning at the World Lung meeting, confirmed the hit on the primary endpoint. Fewer of the lung cancers in the EarlyCDT-Lung group were diagnosed at a late stage of cancer development compared with the cancers identified by CT scanning, the current screening method.

But any watchers hoping for a benefit on mortality would have been disappointed, with a non-significant trend in the Oncimmune test’s favour the best the data could muster. And economic analyses were also missing – not surprising for data presented at a scientific meeting, perhaps, but it is this proof that Oncimmune needs if it is going to persuade health systems to use its product to screen for the disease.

The point of the ECLS trial, from Oncimmune’s perspective, is to persuade health systems to move the test from its currently approved use of ruling out cancer in patients with suspicious lung masses on their CT scans, to the screening setting, ie before CT scanning.

The trial randomised 12,208 participants at a high risk of developing lung cancer to either Oncimmune’s liquid biopsy followed by CT scanning if the result was positive, or to CT scanning alone.

The data show that 33 subjects in the EarlyCDT-Lung group were diagnosed when their cancers were at stages III and IV, compared with 52 given CT scans alone. 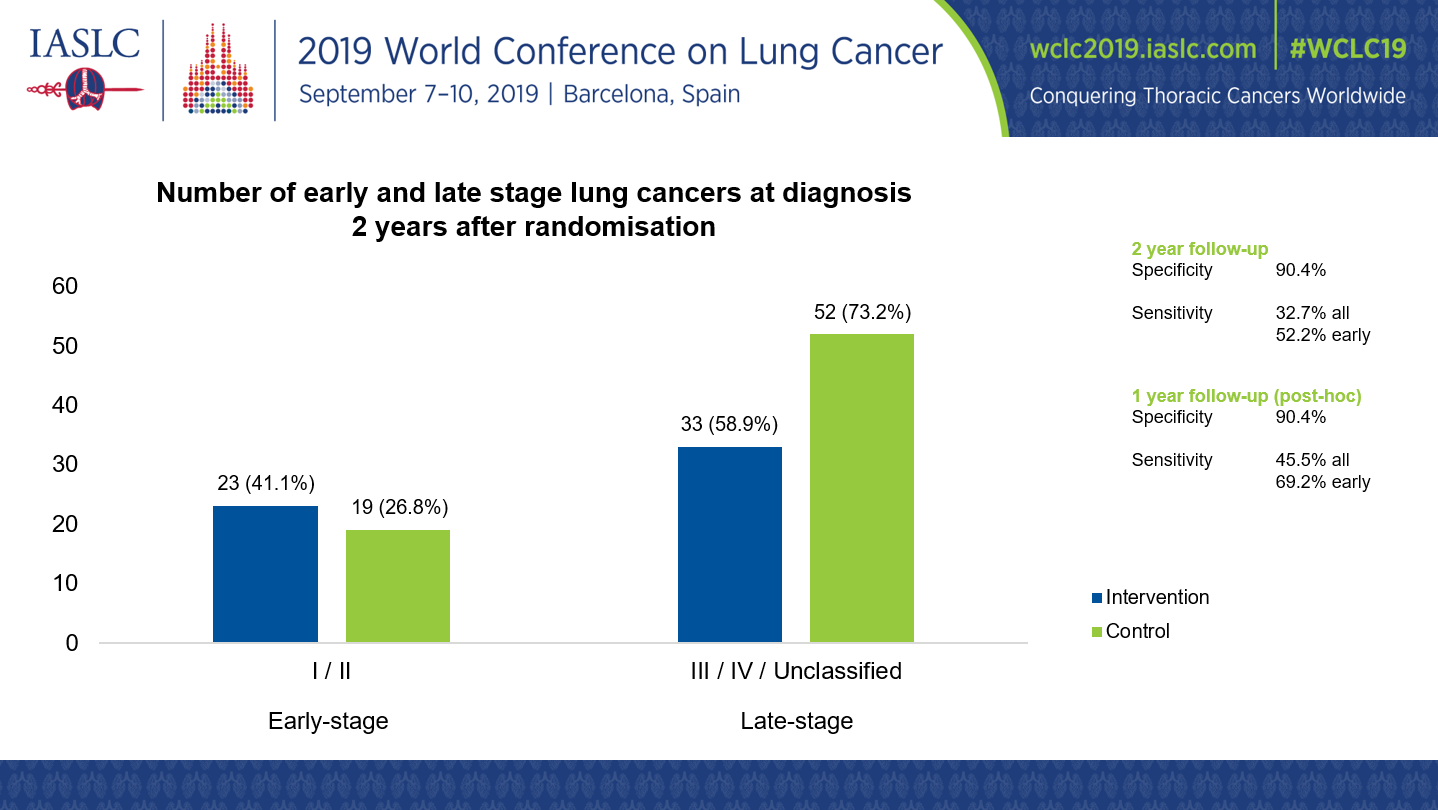 The rate of late-stage lung cancer diagnosis in the EarlyCDT-Lung group was 58.9% compared with 73.2% in the CT group. This statistically significant 36% reduction in late-stage presentation in subjects tested with EarlyCDT-Lung ahead of CT compared with CT alone ought to help the case for pre-CT screening use of the test.

As such, ruling cancer out is the crucial point, and the data show the liquid biopsy to have 90% specificity, versus around 49% for CT scanning.

What would make a really compelling case, of course, would be proof that this earlier diagnosis has a definite effect on survival.

Fewer patients in the liquid biopsy arm died than in the control arm – 87 vs 108, respectively – during the two-year duration of the study, and similar results were seen when this was restricted to lung cancer-specific mortality, at 17 vs 24. But neither difference was statistically significant. 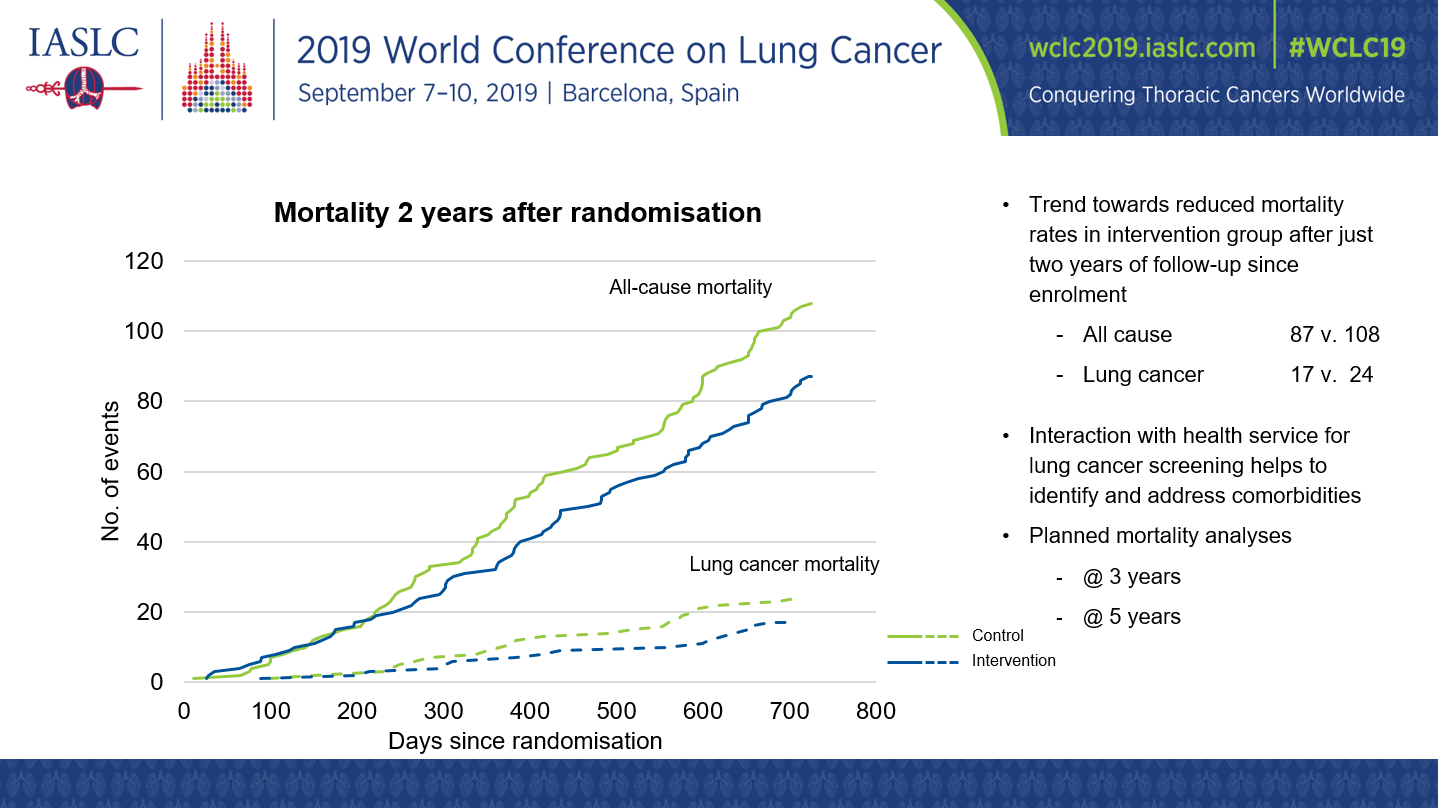 In fairness the ECLS trial was not powered to show a mortality benefit. Oncimmune said that survival would have to be assessed by its next, even larger, study of EarlyCDT-Lung; this trial could enrol up to 200,000 patients.

So far all the data show is that, theoretically, use of Oncimmune’s test could save payers the expense of scanning and treating people whose lung masses are not actually cancerous – and also allow lower treatment costs by catching the cancers that are there at an earlier, more treatable stage.

But actual hard data on this point is still lacking. Adam Hill, Oncimmune’s chief executive, told Vantage earlier this year that using its test as a screen could cut the cost of treating a patient from its current average of £55,000 to £5,000 (Deals and data in the offing for Oncimmune, April 25, 2019). That kind of health economic argument would be hard to ignore.

These data are positive, and the company is trading up 7% on the AIM so far today. But to really make a mark Oncimmune needs to show either a definitive mortality benefit or sizeable cost savings, and so far neither has emerged.

AACR 2019 – Guardant looks to its other liquid biopsy