Checkmate-743 brings success for Opdivo/Yervoy in mesothelioma, but should the combo be used in all-comers?

Last year’s Esmo meeting set the expectations for Bristol Myers Squibb’s mesothelioma study Checkmate-743, and the results, presented at Saturday’s session of the virtual World Lung congress, did not disappoint.

The first-line trial positions Opdivo plus Yervoy to become a new standard of care, said Netherlands Cancer Institute’s Dr Paul Baas, presenting the data. In a disease that has mostly produced disappointment, for Checkmate-743 – one of the few large, industry-sponsored mesothelioma trials ongoing – to read out positively is highly encouraging.

However, while a statistically significant overall survival benefit was seen across all-comers in the trial, this was clearly driven by patients with non-epithelioid disease, who performed badly on chemo control. University of Leicester’s Dr Dean Fennell, discussing the World Lung data, said he viewed Opdivo plus Yervoy as a new standard only in non-epithelioid mesothelioma.

On its primary, all-comers endpoint, Checkmate-743 saw a 26% reduction of risk of death favouring Opdivo plus Yervoy (p=0.002). While at 18-19 months of median OS the combo’s absolute benefit was similar in epithelioid and non-epithelioid tumours, the chemo control fared much worse in the latter histology than in the former.

The resulting difference appeared to be strongly significant only in non-epithelioid subjects, with 9.3 months of median survival benefit favouring the immunotherapy combo, and a hazard ratio of 0.46. Such a dichotomy had been expected, Dr Baas said, and Checkmate-743 had stratified subjects to ensure an even split of epithelioid and non-epithelioid histologies in its two cohorts. 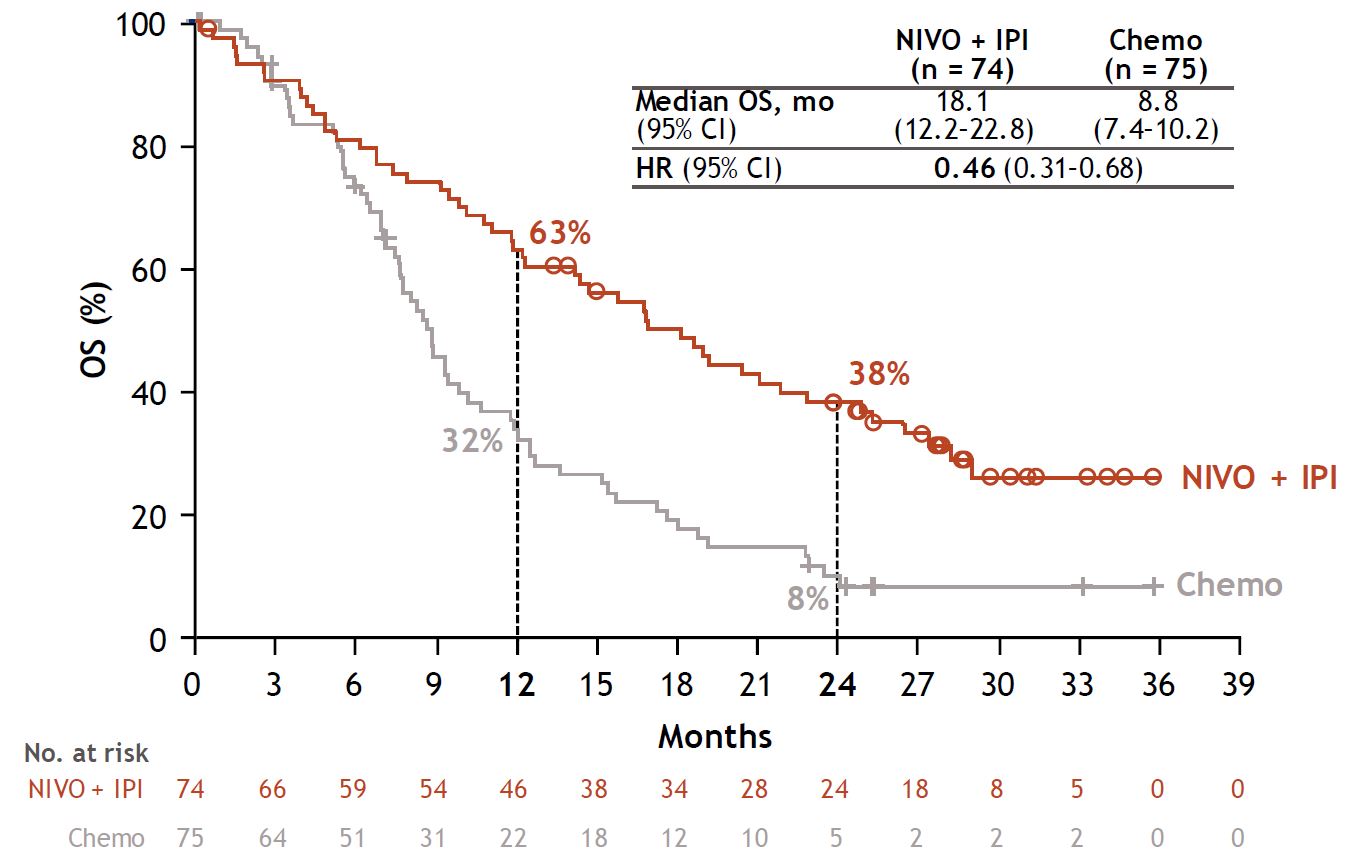 But central to the relevance of Bristol’s combo in mesothelioma is toxicity, given that the rate of serious treatment-related adverse events with it was more than double that seen with chemo alone.

The resulting benefit very much favours Opdivo plus Yervoy in the non-epithelioid histology. But for epithelioid patients the risk/benefit is finely balanced, said Dr Fennell, and indeed “possibly tilts slightly in favour of chemotherapy”, he told World Lung.

Histology is thus a key factor in designing future clinical trials. Non-epithelioid mesothelioma exhibits “epithelial mesenchymal transition”, said Dr Fennell, as a result of which certain proteins are expressed that lead to increased resistance to chemo but not to immunotherapy.

At last year’s Esmo a separate issue was discussed, namely that some mesothelioma patients had extremely poor prognosis, and an imbalance of such “hyperprogressors” could undermine a clinical trial. At the same time, positive data from the uncontrolled Maps-2 trial, in relapsed subjects, raised hopes of success in Checkmate-743.

For now Bristol will only say that it will discuss the latest data with global health authorities, giving away nothing about the timing or breadth of regulatory filings it might seek.

That said, it would make sense for it to file the combo in all-comers, as this could give the company the broadest label while still keeping the possibility of a histology-based approval if the US FDA deemed that this was all the data warranted.

Dr Baas heralded Checkmate-743 as the first randomised trial of a dual immunotherapy in first-line mesothelioma, and given that platinum doublet chemo, the first-line standard of care, yields five-year survival of under 10% the importance of even a borderline readout should not be underestimated.

However, Dr Fennell pointed to Avastin, which five years ago reduced risk of death by 23% when given on top of Alimta and cisplatin in the first-line Maps trial. Despite this, the Roche drug is not approved in mesothelioma, but it is in a separate academic-sponsored front-line trial, Beat-Meso, in combination with Tecentriq.

As for Bristol’s combo in all-comers, the discussant would go no further than suggesting that immunotherapy might have to be combined with chemo to be relevant across all histologies.