Up-front costs are higher than ever, with preclinical and phase 2 assets showing the most price inflation, according to a new analysis of licensing deal trends.

Surging valuations have been a feature of life for biopharma for some time now, prompting concerns that high prices could hold back deal making. However, little evidence of a slowdown can be seen in licensing transactions, and the cost of sealing these deals has actually been rising.

Up-front costs have jumped markedly since 2016, on both mean and median measures, a new analysis of BioSciDB data finds. This upswell has been driven by deals struck over preclinical assets and those in phase 2. With 2021 far from over the stats are showing no signs of price retrenchment, although on volume this year is looking a little muted.

Over the first half 77 deals with disclosed up fronts were announced by drug makers, a run rate that, if repeated in the second half, would numerically make 2021 the quietest year since at least 2016. But inflated asset valuations mean that sellers are unlikely to be concerned just yet: in 2020 biopharma paid out a record $13.7bn in up-front fees, Evaluate Vantage finds, and this year is tracking not too far behind.

This analysis concerns only licensing deals with a disclosed up-front value – these comprise about a third of all licensing transactions collected by BioSciDB each year. Collaborations involving medical devices and diagnostics have been excluded. The total deal value, which includes milestones payments and royalties that might never be paid out, is also not considered.

On both mean and median measures, up fronts have almost doubled since 2016, to $75m and $20m respectively in the first half of 2021. The chart below illustrates how, overall, initial licensing fees have been moving upwards over the past five years.

Another recent cut of BioSciDB data found that the five largest phase 1 up fronts had all been struck since 2020 (Bristol and Glaxo’s oncology deals vault into the top five, June 18, 2021). Four of these were in cancer, a therapy area that will be largely responsible for the price inflation being seen in these topline numbers. 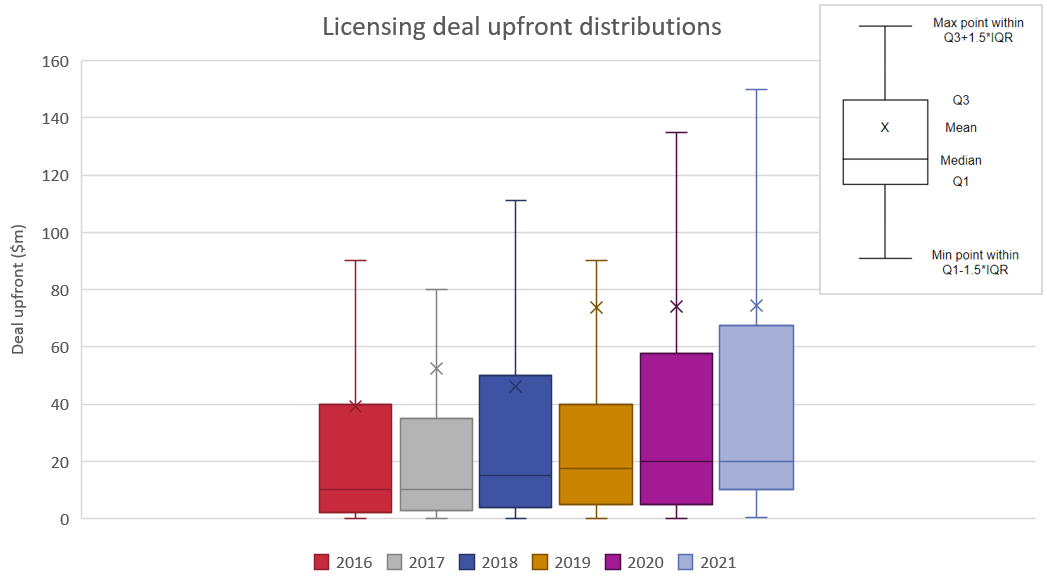 Outliers will drive averages higher, of course, so a more detailed look at median values arguably gives a more representative idea of the up-front fees changing hands. The chart below shows this by developmental phase of the asset concerned; for deals involving more than one project this refers to the most advanced.

It is here that a clear upsurge can be seen in preclinical up-fronts. This is also the stage at which most of these deals are struck, with preclinical assets counting for around half of all R&D-stage transactions. Recent pricey examples here include the $200m that Bristol Myers Squibb paid for rights to Agenus’s anti-Tigit project, an incredibly hot immuno-oncology mechanism, and an RNA-targeted discovery pact that saw Arrakis bank $190m from Roche.

As an aside, the licensing of projects that have been filed for approval or are already on the market (not shown below) happens infrequently, counting for only 8% of the transactions over the period of this analysis.

The opening months of 2021 aside, the same inflation can be seen for assets in phase 2, which is frequently said to be the “sweet spot” for deal making. It is also notable that the median initial fee paid for a phase 2 project has, since 2018, been similar to or much higher than the up-front cost of a phase 3 transaction.

There is little reason to believe that the cost of cornering in-demand projects will dip anytime soon. Large developers remain in fierce competition for experimental agents in fields like cancer and rare diseases, and for access to cutting-edge technologies like gene therapy and RNA-based platforms. And start-ups are flush with cash, putting them in powerful bargaining positions.

BioSciDB is owned by Evaluate Ltd.

Bristol and Glaxo’s oncology deals vault into the top five

To buy or build blockbusters?