Mid-stage data with lenacapavir in treatment-naive patients justify pushing on; as for combos, Gilead is keeping its options open.

Gilead is already seeking approval for its long-acting HIV project lenacapavir in heavily treatment-experienced patients. But the big prize for the group would be the much larger treatment-naive population, where the therapy took a step forward last month with promising phase 2 data in combination with standard therapies.

But that is just proof of concept; Gilead has other ideas when it comes to a final combination therapy for treatment-naive patients. It plans to trial lena with equally long-acting projects, and to this end recently agreed to develop its asset alongside Merck & Co’s islatravir.

And Gilead has not stopped its search for the perfect add-on for lena, the group’s vice-president of HIV research, Jared Baeten, tells Evaluate Vantage. He says the group is looking at various molecules, adding: “We’re evaluating all possible options, including internal ones.”

In studies so far, lena has been injected every six months after an initial oral loading dose. Gilead hopes to challenge Glaxosmithkline, which has a once-monthly option in Cabenuva but is hoping to go longer (Glaxo needs long-acting HIV gamble to pay off, June 24, 2021).

Gilead reckons it is on the right track after encouraging data from the Calibrate trial of lena in treatment-naive patients were reported at the International Aids Society meeting.

Lena was given either twice-yearly subcutaneously or once-daily orally, both in combination with established daily oral regimens. The goal was not to identify a specific lena-containing regimen to take forward, Mr Baeten explains, but rather to show that lena could be effective in this setting in combination with other antiretroviral drugs.

Gilead believes that it has met this goal. Calibrate found that, at 28 weeks, 92-94% of patients receiving the lena-containing regimens achieved an undetectable viral load, versus 100% of those getting Biktarvy, Gilead’s blockbuster once-daily oral. The company carried out a non-inferiority analysis, and the differences between the arms were not statistically significant, according to Mr Baeten. 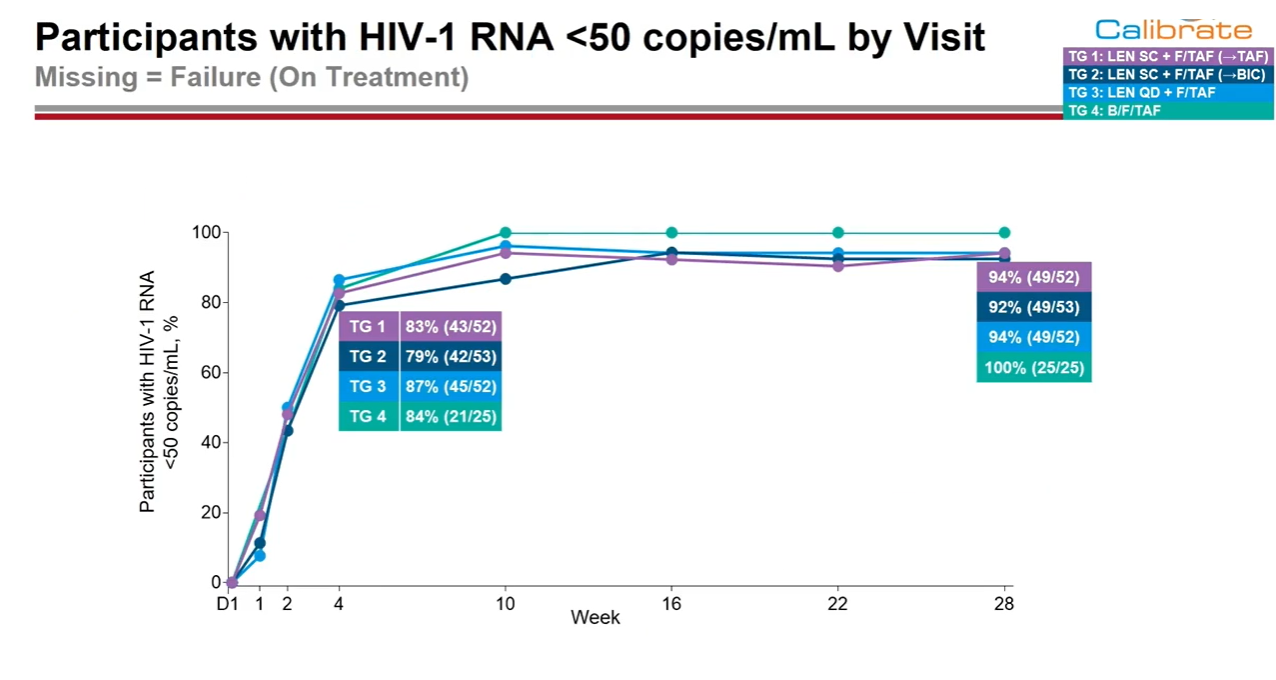 The primary endpoint of Calibrate is the proportion of patients with undetectable viral load, defined as less than 50 copies/ml, at week 54.

All eyes will be on the longer-term lena data, then. In the meantime there are a couple of reasons for caution. First, one patient, who received subcutaneous lena plus daily oral Descovy, had emergent resistant mutations at week 10. That patient’s viral load came down to undetectable levels after switching to a regimen containing azidothymidine, lamivudine, tenofovir disoproxil fumarate and dolutegravir.

Mr Baeten notes that “injection site reactions are not uncommon with therapeutic injections”. Indeed, the label for Glaxo’s Cabenuva highlights a 1% discontinuation rate due to such reactions in that drug’s clinical trials.

And the trade-off might be worth it for patients needing a longer-term option, such as those who have trouble complying with a daily regimen, or who fear their HIV-positive status being exposed.

Further into the future, Gilead wants to develop a cure for the disease. “We are in HIV so someday we don’t have to be in HIV any more,” Mr Baeten says. Part of these efforts involve vesatolimod, a toll-like receptor 7 agonist, and phase 1 data on this project also featured at IAS.

This research is early, and the long-acting space could provide a nearer-term – and more sustainable – opportunity for the company. But the sellside is not convinced about long-acting therapies: consensus compiled by Evaluate Pharma forecasts Cabenuva and lena sales at $924m and $898m respectively in 2026. To put this into context, Biktarvy is expected to bring in $11bn that year.

Roche takes it to the tumour

Interview – Abivax not getting ahead of itself in HIV chase