Backed by big medtech including Medtronic, MD Start aims not just to incubate start-ups but to create new device companies from scratch.

Venture capital firms’ reluctance to stake money in early-stage medtech companies is a fact of life, and the proportion of VC cash going into seed and series A rounds for device makers hit a new low last year. Fortunately there is still some activity here, and the Paris-based group MD Start has just raised €48m ($53.6m) for its third medtech accelerator fund with the aim of fostering innovation at the earliest stages.

“We look for ideas, not companies,” Anne Osdoit, the partner at MD Start who is in in charge of the MD Start III fund. “When we get things in our deal flow, typically it’s a concept with maybe one or two patents, and a clinician inventor who has brought about the idea and started developing it.”

The reason behind a paucity of VC funding for young medtechs is that they are high-risk investments compared with companies at a later stage of development, with clinical trial data, approvals or even reimbursement in hand. But Ms Osdoit says getting in at this extremely early point actually enables MD Start to mitigate its own risk. 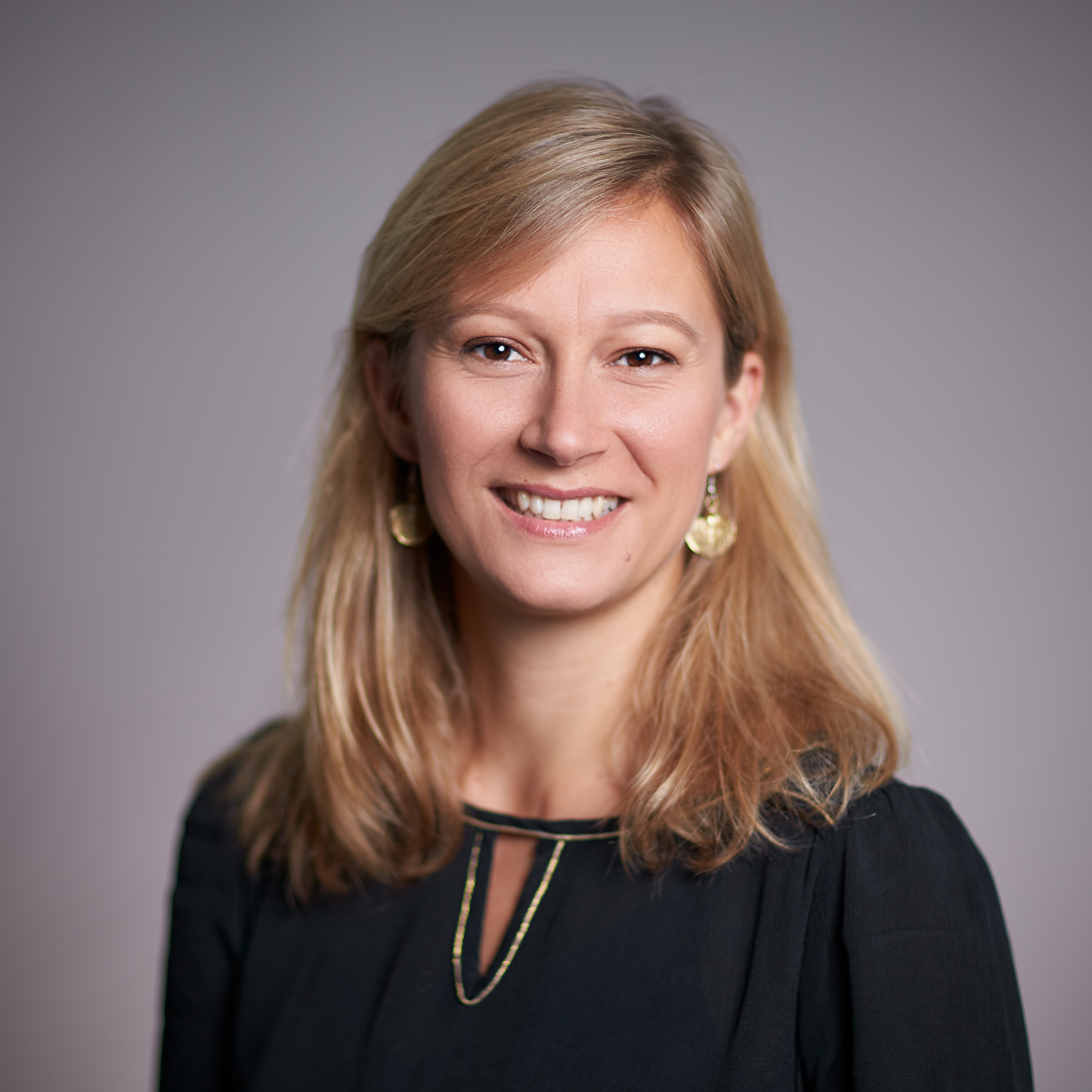 “It is easier if you actually start the project yourself and derisk [it] in a systematic way, while also having majority ownership from the get-go,” she says. Once MD Start finds a promising device or diagnostic the group does exploratory work including prototyping or animal experiments, and only then does it decide to form a company and make a formal seed investment.

The first investment from MD Start III could occur in the summer, Ms Osdoit says, and certainly by the end of the year. From its first and second funds, each of which raised €10m, MD Start has created and incubated seven start-ups in various sectors.

With its first two funds, MD Start invested around €3-4m in the initial seed rounds, sustaining the new companies for two to three years until their technologies enter human trials. It then staked a similar amount in the A round, usually with a co-investor as the lead.

“As a consequence of that in MD Start I and II we were undergoing severe dilution after the initial seed round and incubation,” Ms Osdoit says. So MD Start raised a much greater sum in its third fund, which will be managed by the VC group Sofinnova Partners, which will enable the former to make further investments post-series A.

When it comes to therapy areas, Ms Osdoit says MD Start is agnostic. “We like things that represent stand-alone therapies. We like things that are interventional. We don’t shy away from implantables – they tend to be a bit longer and more expensive to develop but it’s not an exclusion criterion,” she says. “We’ll look at everything that comes through.”

MD Start’s corporate backers will look at everything too. Medtronic, Livanova and Baxter are all investors in the fund, and Ms Osdoit says one of their reasons for investing is to get a first look at technologies on which they might wish to pounce.

“There’s no right and no obligation from our corporate LPs to fund or acquire the companies out of MD Start, but that’s definitely one reason why they invest,” she says. Other reasons are that participation in this way gives the large groups a vehicle to evaluate new device concepts that could be of interest to their customers, but might not be without the much more expensive process of developing them in-house – a kind of arm’s-length R&D.

Lastly, Ms Osdoit points out that MD Start gives US-based corporates, which are often more familiar with the US medtech scene, a better idea of what’s going on in Europe in terms of early-stage medtech innovation.

However, the fact remains that MD Start has yet to exit any of its portfolio companies, and has been holding on to some of them for nearly a decade.

“Since we create these companies from scratch the holding period might be slightly longer than it would be for traditional funds, and that’s really due to our operational model,” Ms Osdoit says, not unreasonably. And there are of course far fewer potential acquirers for medtech start-ups than there would be for biotechs.

Perhaps the involvement of Sofinnova will help here. Sofinnova has backed several medtechs that went on to successful exits: the heart valve company Corevalve was sold to Medtronic in 2009, and the renal denervation concern Recor Medical was picked up by Otsuka last year (Otsuka buys Recor on cusp of US approval trial, July 11, 2018).

After all, while anything that boosts VC activity in early-stage medtechs is to be welcomed, it is equally vital that young companies reach the next stages of development – for patients as much as investors. 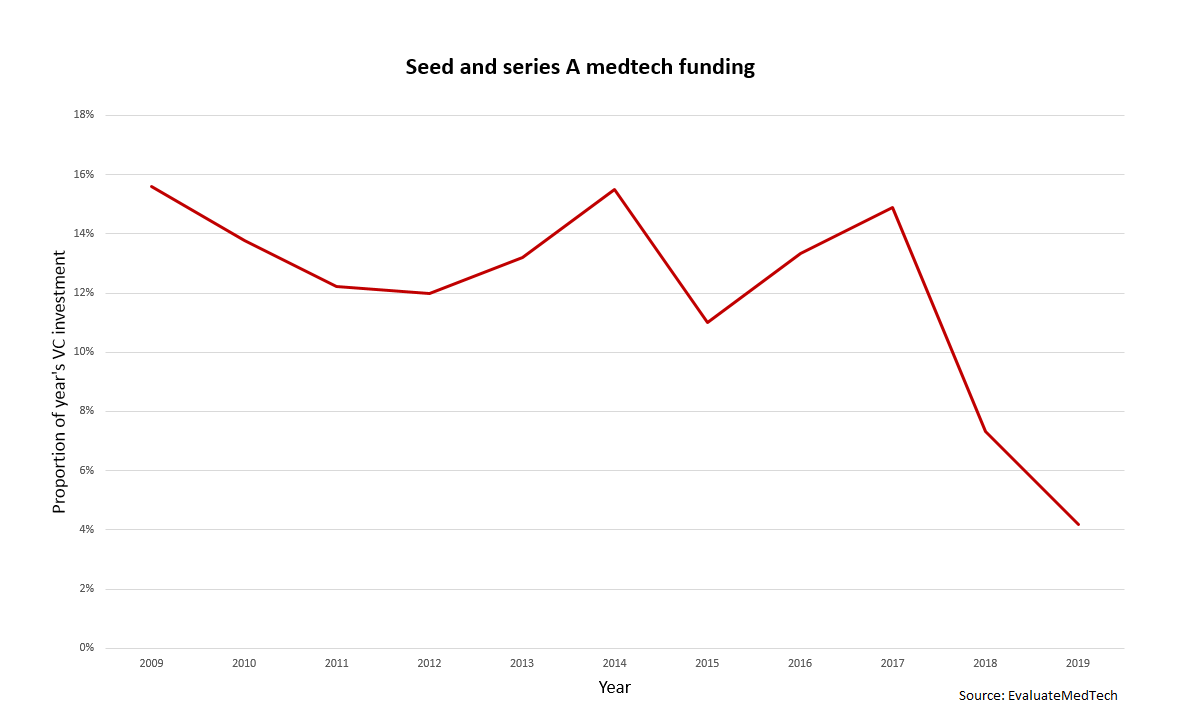 In 2019 the total cash invested in medtech seed and series A rounds fell to just 4% of the total value of medtech VC investment – a new low.
Interviews

Intuitive faces down the competition

Ablative Solutions has a fight on its hands in renal denervation

Thrive emerges with cash, a cancer blood test, and a plan