Analysts see semaglutide helping Novo Nordisk to beat its sales target in obesity, but the company has bigger ambitions for earlier projects.

Last year Novo Nordisk said it hoped to double its obesity sales by 2025, but that target already looks beatable. Impressive data with semaglutide have prompted analysts to raise their forecast for the Danish group’s obesity franchise, and there are also hopeful signs with a next-generation combination project.

Currently, sellside consensus compiled by EvaluatePharma sees Novo exceeding its goal – which would equate to sales of $1.7bn – by 2023. So far, the company has been cautious about raising expectations further, but Novo’s chief science officer, Mads Krogsgaard Thomsen, tells Evaluate Vantage that analysts might be on the right track.

“We never said double – we said more than double,” he says. “But now we’ve got better data from the Step programme [of semaglutide] and the combo than we predicted, so we might achieve that target earlier than we thought.”

Key to these bullish expectations is semaglutide – the active ingredient in Novo’s latest GLP-1 agonists. This drug is already marketed for diabetes under the names Ozempic and Rybelsus, but at lower doses than in obesity.

Sema looks odds-on for approval in obesity on the back of impressive data from the Step programme. Novo had been targeting weight loss of at least 12% on a non-placebo-adjusted basis; the Step 1, 3 and 4 trials found losses of 17-18%. The company plans to file sema in the new indication by the end of 2020.

Analyst expectations for sema in obesity have been rising since the first Step trial read out in May, EvaluatePharma consensus shows.

At present the sellside expects sema to overtake Novo’s existing obesity drug, Saxenda, by 2024. Saxenda is not particularly effective, leading to around 5-7% weight loss, but still managed to generate sales of $852m last year.

Sema represents a step up in efficacy, but Novo hopes to do even better – the group’s long-time ambition has been to find a drug that could generate weight loss in line with that achieved with bariatric surgery, of at least 25% (Will Novo’s big thinking in obesity pay off?, April 15, 2020).

The Danish company believes that this might be possible with its latest obesity hopeful, a combination of sema and the amylin analogue AM833. Others have had little luck in targeting amylin, but Mr Thomsen previously told Evaluate Vantage that Novo had made improvements to AM833 that should help avoid the nausea seen with Amylin Pharmaceuticals’ pramlintide, for example.

Phase II data with the combo released in August showed 17% weight loss with the sema/AM833 combo after 20 weeks. 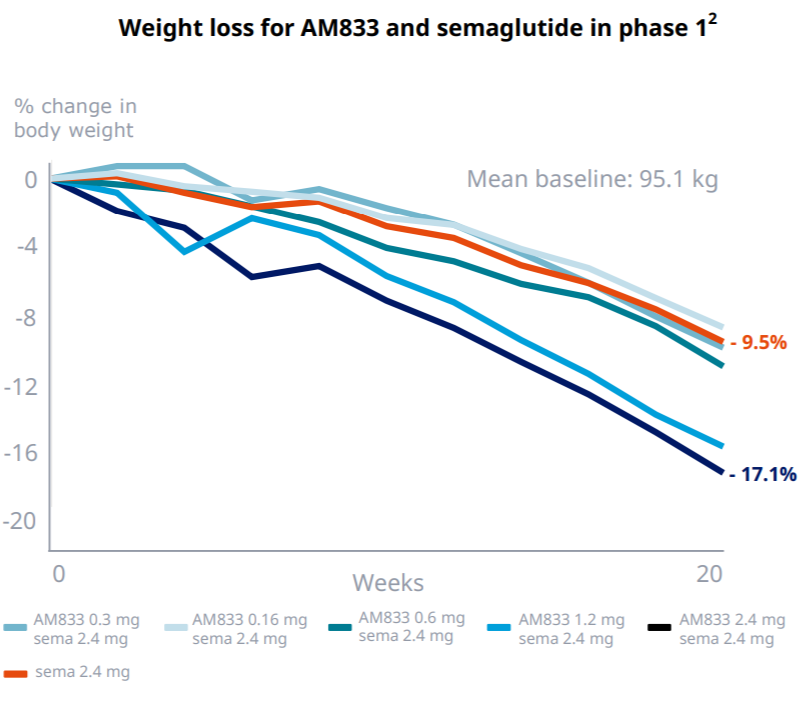 This is still some way off the 25% target. But Mr Thomsen points out that patients were only on the therapeutic 2.4mg dose for the final four weeks of the trial, and that weight loss does not appear to have plateaued.

He believes that in a year-long pivotal trial “we’re likely to see 25% weight loss or even greater. My prediction, that we could have bariatric surgery-like level of efficacy, seems to be fully on track.”

A phase III study of sema/AM833 in obesity is set to begin next year. The combo could also be tested in Nash and perhaps even severe diabetes, Mr Thomsen adds.

He thinks a cardiovascular outcomes study with the combo will not be needed, because of the apparently benign side-effect profile of AM833. A large outcome trial of sema in obesity is already ongoing. Regulators might have other ideas, of course, particularly as Novo envisions its obesity therapies being taken on a chronic basis.

The tolerability of sema/AM833 was apparently only one factor behind Novo’s recent decision to ditch two other obesity projects: its glucagon and GLP-1 co-agonist; and its glucagon, GLP-1 and GIP tri-agonist.

Mr Thomsen hints that serious toxicity concerns might also have influenced the move. “The data tell me that some things are going on that you don’t want – not just gastrointestinal [side effects]. We’re going to publish these data and you’ll see it’s not totally trivial.”

This might mean bad news for Lilly, which is pinning its hopes on a GIP/GLP-1 agonist, tirzepatide. As well as a huge pivotal programme in diabetes that is set to start reading out later this year, Lilly is also conducting a phase III trial of the project in obesity, Surmount-1, with data due in 2022. A spokesperson for Lilly declined to say what level of weight loss the company hopes to see.

As for adverse events, the Lilly spokesperson pointed out that in phase II tirzepatide had a similar safety profile to GLP-1 agonists, with temporary mild to moderate gastrointestinal effects most commonly reported.

Companies evaluating glucagon/GLP1 combos include Astrazeneca with cotadutide and Merck & Co/Hanmi with efinopegdutide, previously known as HM12525A. Both are being developed in Nash, although J&J trialled the latter in obesity before handing it back to Hanmi last year.

Energy in, energy out

While sema, AM833 and GIP all work on the appetite suppression side of weight management, glucagon agonists are involved in energy expenditure.

Novo hopes to find new mechanisms to spur the latter, Mr Thomsen believes. “I think we’re getting close to maxing out on appetite modulation.”

He highlights uncoupling protein UCP1, found in the mitochondria of brown fat tissue, which burns off energy to generate heat. Mimicking this protein could be a way of increasing energy expenditure, although work on this target is still very early.

More immediately, it will be clinical and commercial success with sema and, eventually, the combo, that determines whether Novo can become a force in obesity.

Novo in need of a booster shot