Before the Forma deal Novo brought in assets via Corvidia, Prothena and Heartseed. Some have progressed faster than others.

Novo Nordisk has become a $200bn company by focusing primarily on diabetes. But in an apparent admission that it needs more spokes to its wheels, the group has been expanding its horizons of late with deals in cardiovascular and rare diseases – exemplified by today's $1.1bn buyout of Forma Therapeutics.

The recent ESC meeting featured a couple of the Danish company’s heart disease contenders, with mid-stage data on the anti-IL-6 project ziltivekimab, and long-awaited details on a phase 2 study of PRX004 in amyloidosis with cardiomyopathy. However, it has not all been plain sailing: after Covid delayed the start of first-in-human trials of the stem cell candidate HS-001, dosing is finally set to get under way this year.

HS-001 is being developed for heart failure with the Japanese company Heartseed, under a deal forged just over a year ago.

Novo believes that there is still room for improvement in the disease. “Heart failure cannot be cured,” the company’s head of development, Martin Holst Lange, told Evaluate Vantage on the sidelines of ESC, before the Forma deal was announced. “[Current] therapies can slow disease progression, but a major unmet medical need remains for patients who continue to deteriorate even if optimised on standard of care.”

The new phase 1/2 trial could support conditional approval in Japan, where Heartseed is taking the lead; Novo will conduct studies in the rest of the world. Still, other stem cell approaches in heart failure have not met with success, and this looks like a long shot for the Danish group, although at $55m in up-front and near-term payments the deal represented only a small bet.

In the lap of the gods

Not so the cardiovascular project ziltivekimab, which Novo netted through the $725m purchase of Corvidia – a relatively large buyout by the company’s usual standards, although it has since been dwarfed by moves for Dicerna and, now, Forma. Promising results from the phase 2 Rescue trial in patients with chronic kidney disease swiftly followed, and Novo took the asset into a phase 3 outcomes trial, Zeus.

The aim with ziltivekimab is to reduce inflammation and thereby decrease the risk of cardiovascular events, but so far Novo has only reported biomarker data. At ESC reductions seen in the inflammatory marker hsCRP in the Rescue-2 study, in Japanese patients with chronic renal disease, replicated those seen in Rescue. 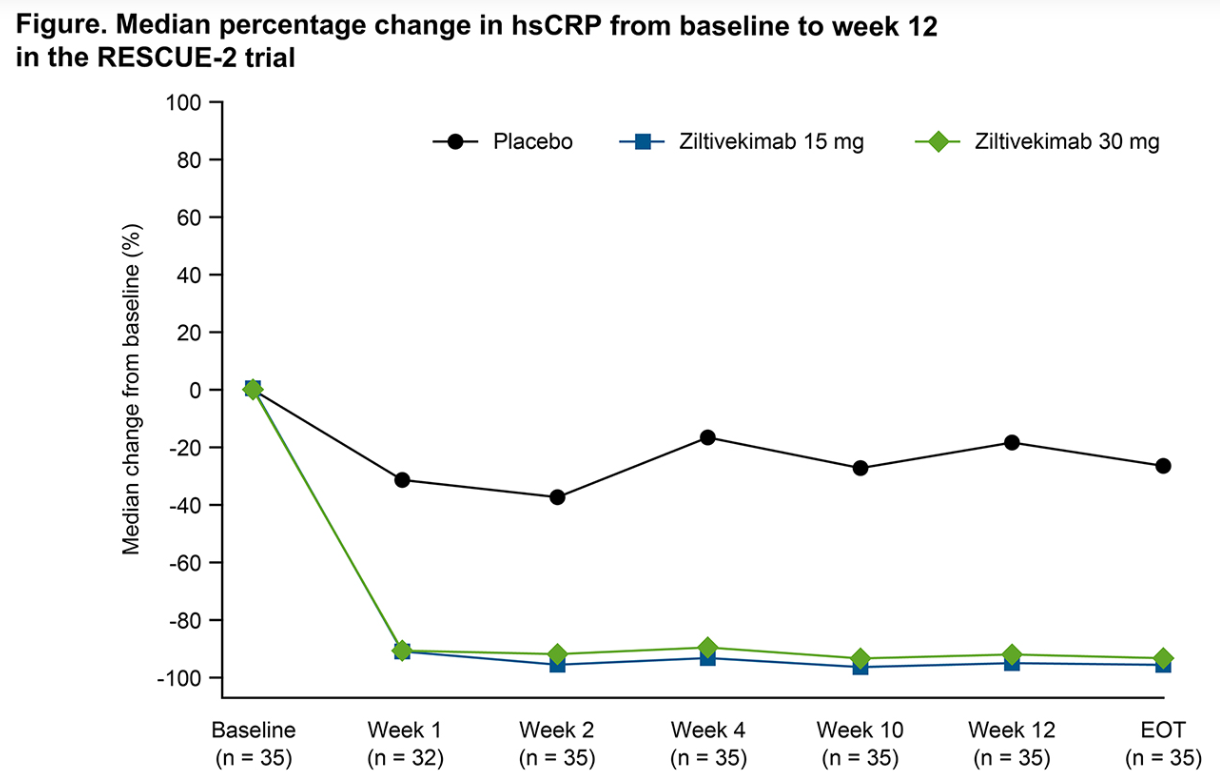 “We have to show that this pans out in hard outcomes in phase 3,” Mr Lange said. “But this is giving us a high level of excitement for what this molecule can do.”

One thing to keep an eye on in phase 3 will be triglyceride levels: Rescue-2 showed a “limited, but statistically significant” increase in these. A spokesperson for Novo told Vantage that the group was "not concerned" about this, noting that an increase was not seen in the larger Rescue trial.

Another big cardiovascular hope is PRX004, acquired from Prothena last year for $100m up front. The cardiomyopathy segment could soon have a new option, following Alnylam’s recent win with its RNAi therapy Onpattro, but Mr Lange is not fazed.

He noted that PRX004 works differently to most of the other therapies approved or in development: the project is an anti-transthyretin MAb that, Novo believes, could clear pathologic forms of the protein.

Pfizer’s approved oral drug Vyndaqel is a transthyretin stabiliser, while Onpattro and others are designed to prevent the production of transthyretin. “With a slightly different mode of action, which focuses on depletion rather than just stabilising the situation, we do believe that there will be more room for innovation."

The other anti-transthyretin antibody in development, Neurimmune’s NI006, was licensed by Astrazeneca early this year, so Novo is not the only big player interested in this approach.

When Novo bought PRX004, there were questions about which patients it would include in its phase 2 trial. Prothena had previously said it would focus on the niche of moderate-to-severe ATTR cardiomyopathy, specifically patients with NYHA class III and IV heart failure; Vyndaqel’s mortality benefit looks less impressive in class III than class I and II patients.

Novo appears to be going for a middle ground, with its study enrolling NYHA class II and III subjects. The trial, whose design featured in a poster at ESC, will include both hereditary and wildtype patients; the co-primary endpoints are the tricky six-minute walk test and change in levels of NT-proBNP, a measure of cardiac stress. Data should be available in late 2023 or early 2024.

As well as cardiovascular, Novo has signalled its intent in rare diseases – emphasised again with today's deal – and has a high-risk/high-reward bet on Alzheimer’s, which could all help reduce its dependence on diabetes. Will the group become a cardiovascular player? The next couple of years should show whether it has chosen its investments here wisely.

This story has been updated in light of Novo's purchase of Forma.

Novo bets against Crispr for amyloidosis

Astra follows Novo’s lead, for a third of the price