While bulls and bears continue to argue over Principia’s multi-cohort crossover multiple sclerosis dataset with SAR442168, a rival BTK inhibitor is making a bold bet. Merck KGaA yesterday revealed that the design of its two pivotal studies of evobrutinib, initiated last year, would be changed to compare that agent against not Biogen’s Avonex but Sanofi’s Aubagio.

This is quite the bullish view, especially given how little evidence exists to back BTK inhibition in MS. The approach relies on the theory that the disease involves B cells, something that separately spurred development of Roche’s blockbuster anti-CD20 MAb Ocrevus.

At heart lies Merck’s view that Aubagio is a tougher comparator than Avonex, and beating the former in pivotal trials would help it make the best case for evobrutinib, especially as this would entail a head-to-head comparison of two oral agents.

Evobrutinib’s two pivotal trials, Evolution-RMS1 and RMS2, each started enrolling a planned 950 relapsing MS subjects last August, and were designed with Avonex comparator arms, as is still stated on clinicaltrials.gov. Merck says that more than 400 sites are already enrolled, and over 90% are willing to change the comparator drug to Aubagio.

More sites will also be added, said Mr Rossetti. With no delay forecast, pivotal data are still possible by the fourth quarter of 2023.

Merck claims that its confidence stems from a 96-week cut of a phase II evobrutinib trial whose primary 12 to 24-week data were published last year. In particular, annualised relapse rates, which at 24 weeks were 0.08-0.13 for the two highest evobrutinib doses, remain around 0.11 at 48 and 96 weeks, Merck disclosed yesterday.

In comparison, two Ocrevus extension studies in a similar setting have shown 96-week relapse rates of 0.09 to 0.12. It is this cross-trial comparison that leads Merck to believe that evobrutinib could become the oral equal of Ocrevus, and the two pivotal trials have 96-week annualised relapse rate as primary endpoint.

But it is not inconceivable that a separate factor had focused Mr Rossetti’s mind: Sanofi, Principia’s partner, recently revealed that its pivotal study in relapsing MS would compare SAR442168 against Aubagio, so Merck risked getting left behind. The German company yesterday denied that this was a consideration.

Merck also claimed that evobrutinib was brain-penetrant, but admitted that this was only backed by animal data. A central pillar of the Principia bull case is that SAR442168 is the only BTK inhibitor with this property, and analysts have previously called evobrutinib non-brain penetrant.

Despite Merck’s bullishness, only the middle and not the highest evobrutinib dose met the phase II trial’s primary endpoint, after the NEJM revealed that Merck had not adjusted statistics for multiplicity (German Merck watches evobrutinib’s benefit melt away, June 20, 2019). Moreover, the BTK inhibitor has been associated with liver enzyme elevations.

When all is said and done, if Merck wants to take on Ocrevus, why not just pit evobrutinib directly against the Roche drug? An Aubagio comparator gives sufficient power to show superiority with a relatively small sample size, argued Mr Rossetti.

Cynics will add that suggesting similarity across trials is safer than demonstrating inferiority head to head. 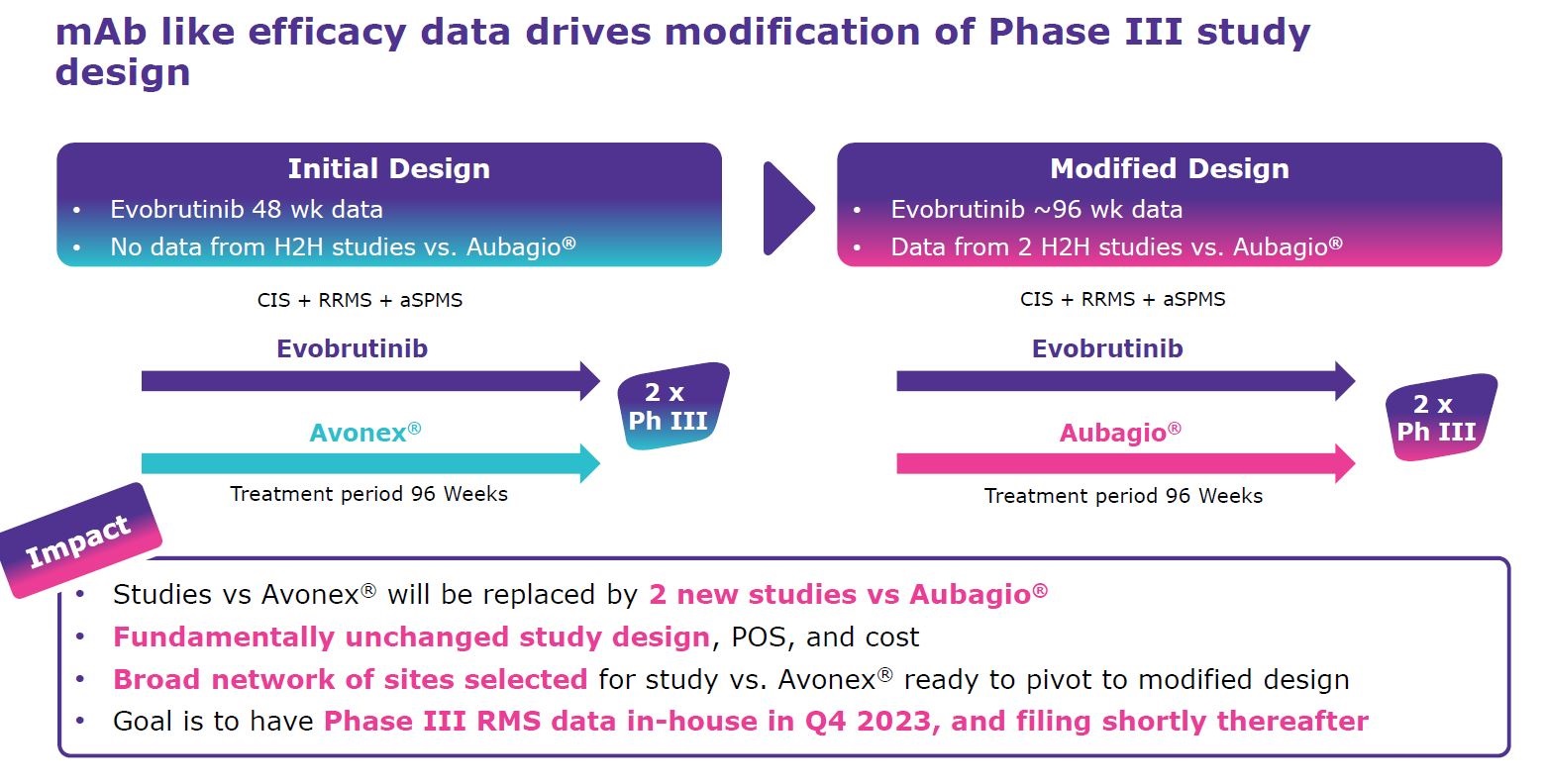 Troubled Zinbryta might not be missed in stagnant multiple sclerosis space