The UK big pharma is set to hand Japan’s Daiichi $1bn for rights to a second antibody-drug conjugate. Immunomedics watch out.

By going all in on a second antibody-drug conjugate from Daiichi Sankyo, Astrazeneca is making it abundantly clear what it expects from this technology. The $1bn up-front fee due to be handed over for DS-1062 implies that huge commercial success is expected – for a project that remains in phase I.

Limited proof of concept did not stop Astra handing over even more cash for Enhertu last year, of course. That anti-Her2 ADC progressed incredibly quickly and is now approved and backed by blockbuster sellside forecasts. The hope, presumably, is to repeat the trick, but this time the partners are dealing with a much less well-known biological target – Trop2 – and a rival already on the market.

That competitor is Immunomedics, which won approval for its anti-Trop2 ADC, Trodelvy, earlier this year. Accelerated approval was swiftly followed by an impressive readout in the confirmatory Ascent trial, which cut the risk of progression by an impressive 59% in a third-line triple negative breast cancer (TNBC) setting (Immunomedics confirms its approval within three months, July 7, 2020).

An important strategic difference is that Daiichi has focused initial development of DS-1062 on non-small cell lung cancer. But TNBC is the likely next focus for the new partners, who seem to believe that in DS-1062 they have a safer offering.

Trop2 is overexpressed on a variety of cancers, including pancreatic and oesophageal tumours as well as lung and breast. However, it is also found in the epithelium of normal tissues, meaning that potential toxicities are a big concern, and in fact have caused several previous projects to be abandoned: Pfizer canned PF-06664178 back in 2016, for example.

Daiichi has long touted the structural differences between DS-1062 and Trodelvy. A more stable drug linker and lower drug to antibody ratio should mean less toxicity, the company has argued, although whether this plays out, and whether it will come at the expensive of efficacy, remain important questions to be answered.

There are little data to compare the two agents. The most recent release from Daiichi was at Asco, where an ORR of 27% in 85 heavily pretreated NSCLC patients was reported, across three doses; 88% of subjects had failed checkpoint blockade. Back in 2017 Immunomedics reported an ORR of 17% in 54 late-line NSCLC patients, 33% of whom had received immunotherapy.

Neutropenia and diarrhoea are the biggest concerns with Trodelvy, and the drug’s US label has a black box for both issues. Like Enhertu, DS-1062 also seems to be associated with interstitial lung disease – eight events were reported at Asco – while stomatitis occurred as another serious adverse event.

At Asco Daiichi laid out an aggressive development plan for DS-1062, including starting a TNBC trial by year end. With Astrazeneca now on board it will be full speed ahead. 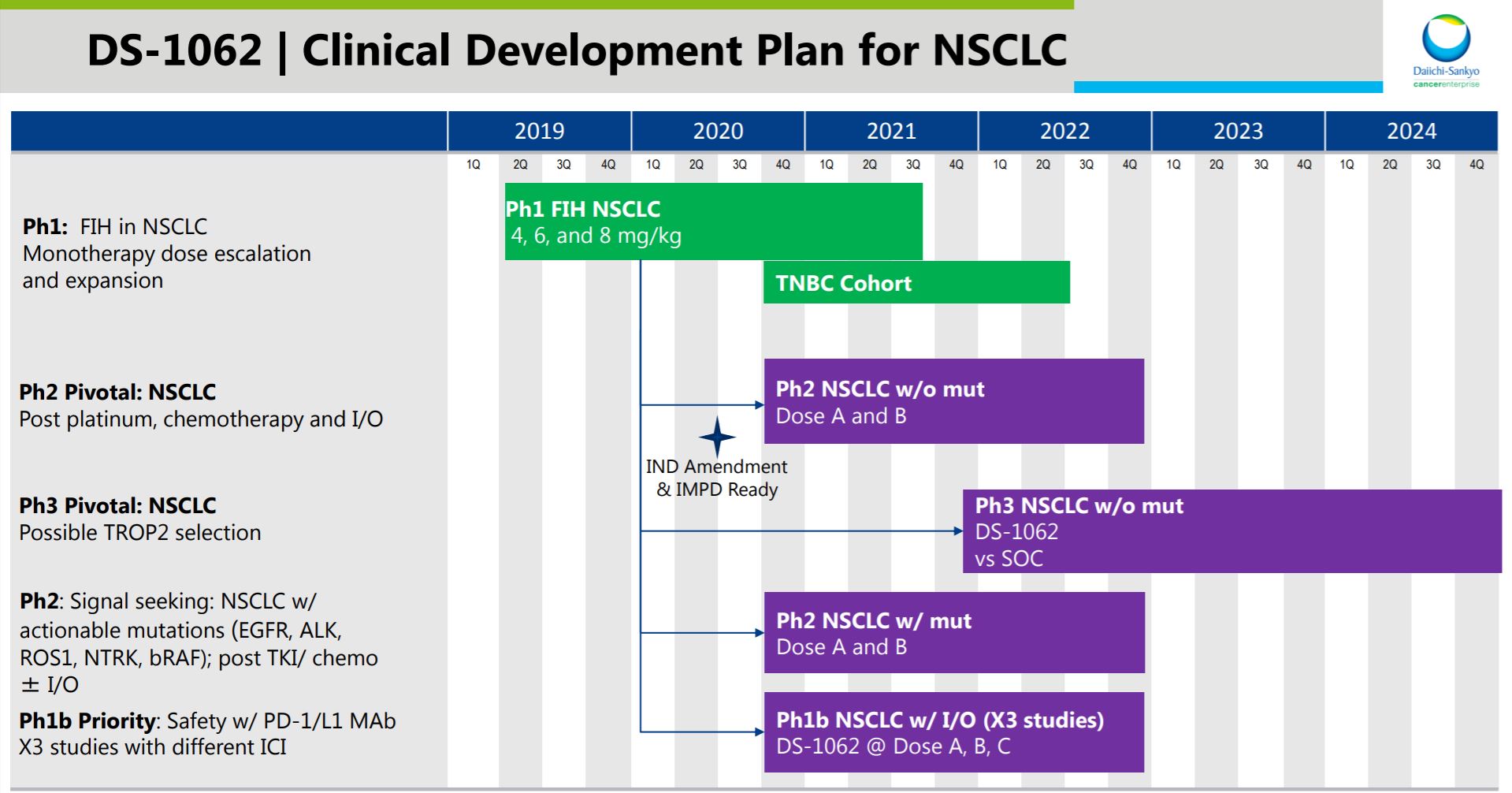 The terms of the transaction see Astra pay the $1bn up front in stages over the next 24 months, although these payments do not seem to be contingent on any milestones. A further $1bn is dependent on regulatory goals, and $4bn rests on sales thresholds: the transaction certainly ranks as one of the richest (Roche reaches deep once again, July 14, 2020).

And, while the existential threat to Trodelvy just got more ominous, the huge sums that Astra has committed here give the Trop2 approach, at the very least, a big boost; Immunomedics' shares opened 4% higher today.

An interesting footnote is that Astra already has a deal in place with Immunomedics over Trodelvy. A 2018 tie-up saw the companies commit to test the ADC in combination with the checkpoint inhibitor Imfinzi, a deal that Astra’s lawyers are no doubt busy backing out of.

But it is clear that there are huge hopes for the Trop2 approach – the sellside has already attached high ambitious sales forecasts to both projects. Given these expectations it is surprising that little else in the Trop2 pipeline exists, which presumably speaks to how difficult this target has proven. Astra now joins an exclusive club of developers relying on an impressive flow of clinical data in the coming months.

Immunomedics refuses to be caught on the hop

Esmo Breast Cancer – Astra and Daiichi square up to Gilead