The Swiss group does another deal to access a novel technology, taking out the RNAi specialist The Medicines Company.

It seems that Novartis cannot get enough of commercially risky novel technology plays. A year after paying $8.7bn for the scandal-prone Avexis, the Swiss group yesterday handed across $9.7bn for The Medicines Company and its lone asset, the RNAi project inclisiran.

Rather like Avexis’s gene therapy Zolgensma, little clinical risk remains with inclisiran; however, whether strong data can translate into anything close to the sellside’s commercial expectations for the lipid-lowering product is the big unknown. Nevertheless, biotech bulls will celebrate a 24% premium that comes on top of a share price already boosted by ongoing takeover rumours.

Takeover speculation around The Medicines Company had been prompted by successive clinical successes. At the European Society of Cardiology meeting inclisiran’s Orion-11 trial impressed, showing reasonable safety and promising LDL-lowering activity; resulting in Merck & Co to be mooted as a buyer.

Then, just a week ago, full data from Orion-9 and 10 presented at the American Heart Association conference sparked a 19% share price spike, and Novartis was named as the leading acquirer (AHA 2019 – The Medicines Company reaches for the stars, November 19, 2019).

These clinical data have made it abundantly clear that inclisiran can target PCSK9 and lower LDL cholesterol via RNAi just as efficiently as the marketed anti-PCSK9 MAbs, Amgen’s Repatha and Sanofi/Regeneron’s Praluent.

The problem, however, is that despite huge investment Repatha and Praluent have proved commercially disappointing. 2024 sellside consensus for both drugs, as compiled by EvaluatePharma, has nearly halved over the past 18 months.

At present inclisiran’s main advantage seems to be convenience: the small interfering RNA is given via twice-yearly subcutaneous injection, while Repatha and Praluent are subcutaneously injected every two weeks or monthly. Novartis insists that inclisiran has “mega-blockbuster potential”.

A major upcoming test of the breadth of inclisiran’s reach is its 15,000-patient cardiovascular outcomes study, Orion-4, expected to read out in 2024. This is handy for Novartis, which hopes to sell the drug using a sales force currently responsible for Entresto, a heart failure drug that by then will be approaching the end of its patent life.

A key part of the problem has been that Amgen and Sanofi have effectively been engaged in a price war to the bottom in a desperate bid to get their respective drugs onto US formularies. Further price cuts would squeeze Novartis’s opportunity even further.

Already, The Medicines Company had said it would price inclisiran at a discount to Repatha, so whether Novartis does a U-turn on this will be something to look out for.

For investors, of course, it is highly encouraging that Novartis has been making bets on risky technology approaches. The company’s willingness to undertake the world’s first RNAi therapy launch is an endorsement of Alnylam, which in 2013 had licensed inclisiran to The Medicines Company for just $25m up front. Alnylam and its RNAi peer, Arrowhead, this morning opened up 6% and 13% respectively.

It is a less positive outcome for Amarin, which nevertheless crept up 3% today. Despite having a proven fish oil-based approach to lipid lowering already on the market Amarin remains the bridesmaid not the bride. 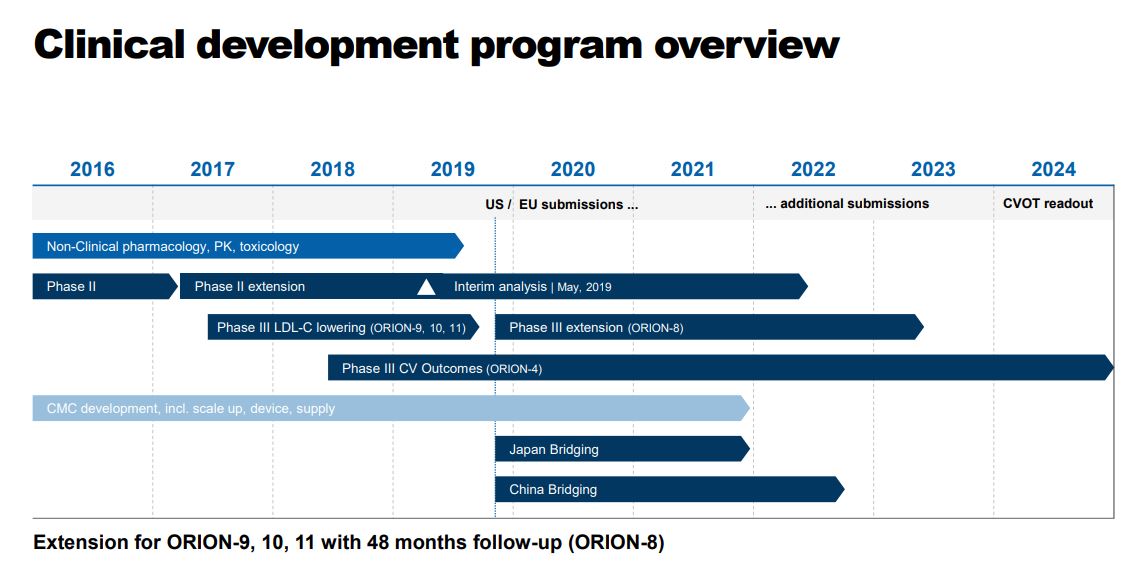 AHA 2019 – The Medicines Company reaches for the stars