Novartis eyes up another gene therapy

The company is making a high-risk, high-reward bet with the purchase of Gyroscope.

Novartis is making yet another foray into gene therapy just as investors are abandoning the sector. And, by buying Gyroscope, the group is taking on a tricky therapy area, geographic atrophy.

Gyroscope, which shelved a planned IPO earlier this year, is not even that cheap, although the $800m up-front fee does pale into insignificance compared with the firepower at Novartis’s disposal. Still, if this gamble pays off, the group will have a therapy that could address 8 million patients with no other options.

However, this is a big if. Many others have stumbled in geographic atrophy, including Roche and, more recently, Gemini and Apellis. Like Gyroscope, these groups targeted the complement system, which has been implicated in the development of geographic atrophy, an advanced form of age-related macular degeneration that leads to vision loss.

Gyroscope is taking a different approach than most of the other geographic atrophy hopefuls (No land grab for Gemini in geographic atrophy, June 23, 2021). Its lead project, GT005, is a potentially one-time gene therapy designed to stimulate the production of complement factor I. This in turn reduces levels of complement C3, a central node of the complement cascade. 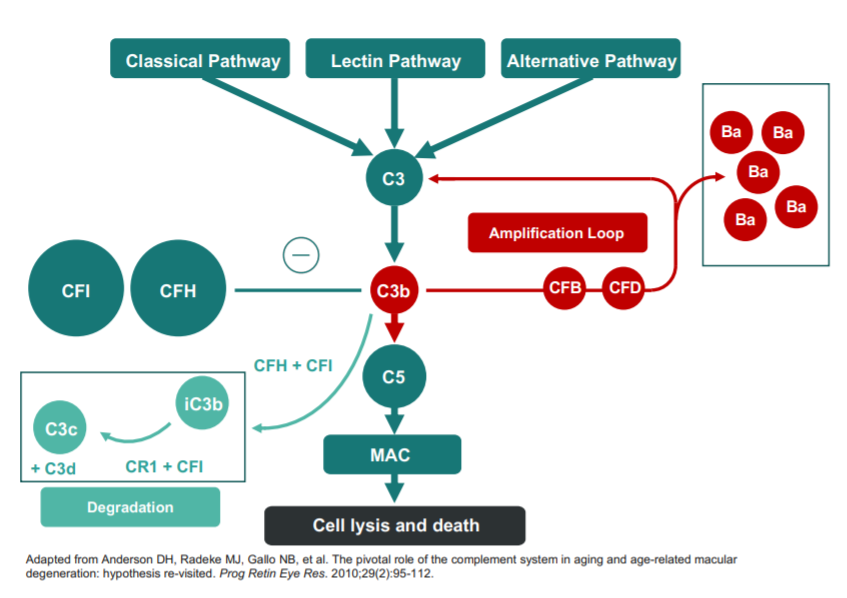 Apellis’s intravitreal formulation of pegcetacoplan targeted C3, and produced a hit and a miss in its twin phase 3 studies, leaving that project’s approval prospects in doubt.

Gyroscope recently reported interim data from the phase 1/2 Focus study of GT005, which is delivered via subretinal injection and uses an AAV2 vector. The trial found no serious adverse events among 28 patients, but there was one case of choroidal neovascularisation, which was possibly related to GT005. Apellis’s pegcetacoplan was also linked with neovascularisations in phase 2, although this was not so much of an issue in phase 3.

Focus also showed biomarkers going in the desired direction: 11 of 13 evaluable patients had increased complement factor I; all of these 11 had decreases in certain proteins associated with complement activation.

It will now be up to Novartis to prove that this translates into a benefit on geographic atrophy progression. Two phase 2 trials, Explore and Horizon, are ongoing.

Novartis was not the only big pharma to see potential in Gyroscope: Sanofi, another serial acquirer, made a $40m investment in the UK group last month. Other major players are also getting involved in geographic atrophy, with Roche this week striking a small licensing deal with Lineage Cell Therapies.

In many ways, the Gyroscope deal makes sense for Novartis: the group already has a presence in gene therapy and has made no secret of its intention to expand here. In the past year or so it has also picked up the early-stage ocular gene therapy players Vedere Bio and Arctos Medical.

And, with gene therapy price tags depressed, now is probably a good time to buy. But big questions still hang over the field in general, notably around safety, durability and commercial viability.

Even Zolgensma, a relative success story, has not been without its problems, and with US sales flattening the jury is still out on whether the product will justify the $8.7bn that Novartis paid for its developer, Avexis.

In a few years it should become apparent whether Novartis’s decision to stick to its gene therapy guns was laudable or just another example of the sunk-cost fallacy.

The undisputed winner from today’s takeout is Syncona, Gyroscope’s founding investor, which also had a successful exit with Biogen’s 2019 takeout of another eye gene therapy player, Nightstar. That deal turned out to be a dud, however, and Novartis will have to hope that Gyroscope does better.

No land grab for Gemini in geographic atrophy