For $3m Verastem adds to its pipeline another asset that a bigger company had given up on.

Since floating on Nasdaq eight years ago Verastem has hardly stood still. Yesterday saw its strategy take another twist as it bought into the hot but competitive space of Kras inhibition through a licensing deal with Roche’s Chugai unit.

A measure of how excited the markets are about the effort to target Kras-mutated cancers, driven by Mirati and Amgen, is that Verastem stock shot up 37% yesterday. So far so good, but it will be some time before the Chugai deal sees clinical progress, and for now Verastem remains a micro-cap biotech with a ragbag of assets cast off by bigger companies.

The latest addition will see Verastem take on global rights to Chugai’s pan-Raf inhibitor CK127 in return for just $3m up front. Backing the deal is that CK127 (RO5126766) is already in an investigator-sponsored clinical trial in combination with Veastem’s clinical lead, the FAK inhibitor defactinib.

However, no results have been revealed publicly, but Verastem told Vantage it had seen the data, which would be released this year; it is also relying on a theory backing the combo and on hints of single-agent activity. Of course, the initial combo data will belong to the academic sponsor, the UK’s Institute of Cancer Research, and it is not yet clear when Verastem’s own clinical effort might begin.

If there is promise in a combination it will hopefully be revealed by the UK study, a basket trial whose expansion phase includes a 20-strong cohort of Kras-mutant NSCLC subjects. In the meantime Mirati and Amgen remain leaders in Kras-targeting (Triple meeting – Mirati avoids the worst-case scenario, October 28, 2019). 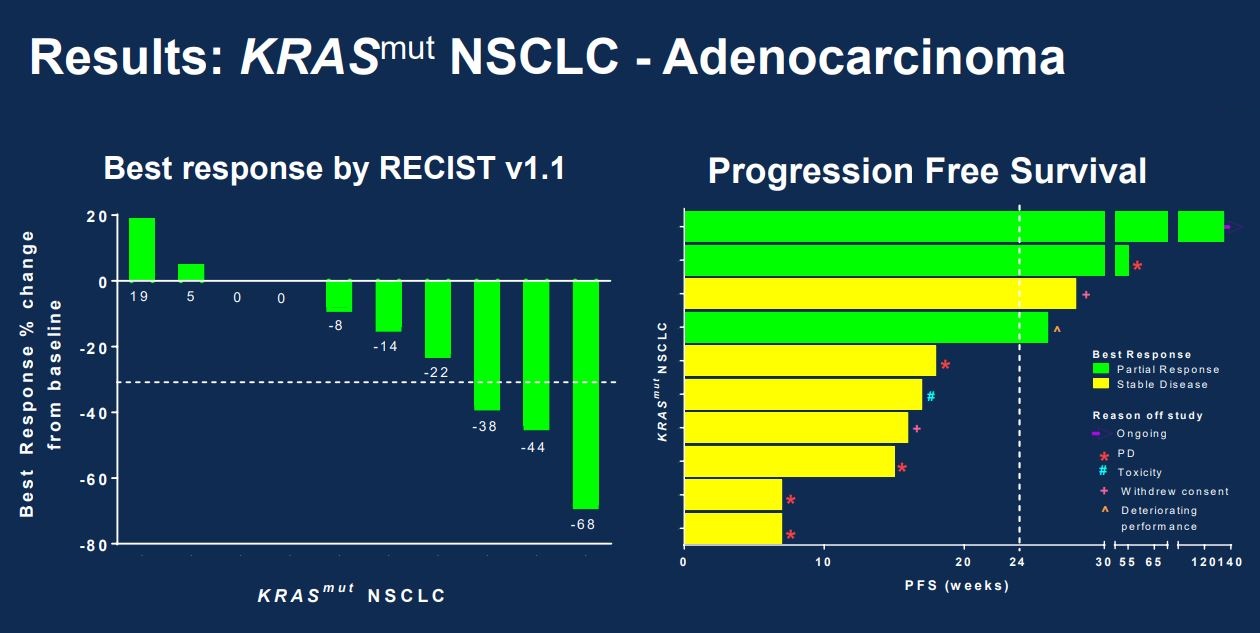 As monotherapy CK127 showed a 33% partial remission rate in a Kras-positive NSCLC subgroup of an adenocarcinoma study, as shown above. Defactinib, meanwhile, has been associated with a 36% rate of progression-free survival at 12 weeks in a similar population, says Verastem, citing previously published data.

CK127 is one of a handful of pan-Raf inhibitors that also include Takeda’s TAK-580 and Basilea’s BAL3833. Interestingly, last year Jazz paid the struggling UK company Redx $3.5m for rights to a preclinical pan-Raf programme; today Redx named as its next clinical candidate RXC007, an inhibitor of Rock2, a mechanism where Kadmon’s KD025 is most advanced.

For Verastem the Chugai deal spells the latest of several since the company floated in 2012, at which point it was focusing on targeting cancer stem cells. Defactinib itself came from Pfizer – for a mere $1.5m – but later failed to generate meaningful single-agent activity, hence the current combination focus.

Verastem also licensed a PI3k/mTOR inhibitor, VS-5584, from S*BIO, but this is now discontinued. Duvelisib, a disappointing PI3k inhibitor, was brought in from Infinity in a deal with no up-front fee and subsequently launched, but generates negligible sales.

Against such a backdrop paying Chugai/Roche $3m for CK127 is par for the course. But, with Verastem 90% off its IPO price, investors remain sceptical as to whether the company can turn pharma’s castoffs into gold.

This story has been updated to clarify that Verastem had already seen the Institute of Cancer Research's combo data.

Redx sells another asset to keep the lights on

Roche reminds the markets that it’s a Kras player