One-year data look encouraging, but etranadez will now not be filed until 2022.

There had once been hopes that Uniqure’s haemophilia B gene therapy etranacogene dezaparvovec might get accelerated approval on the basis of six-month factor IX levels. Although those hopes had long since faded, investors were still dismayed to learn during an R&D event yesterday that the FDA now wants 18-month data from the project’s pivotal trial, delaying a filing by around six months.

Uniqure’s stock fell 7%, but the company did have some good news: one-year data from the Hope-B study showed durable FIX levels and a significant reduction in annualised bleeding rates versus the lead-in period. Still, etranadez's head start in haemophilia B might have been cut, with Pfizer and Roche not far behind.

When Uniqure began Hope-B in 2018 the trial's primary endpoint was FIX levels at six months, with annualised bleeding rate at one year a secondary endpoint.

The trial was later tweaked to make FIX activity and bleeding rates at one year co-primary endpoints, alongside six-month FIX activity, a move based on interactions with regulators.

The FDA has apparently toughened its stance again. Uniqure said yesterday that the sole primary endpoint of Hope-B was now a non-inferiority analysis of annualised bleeding rates 18 months after etranadez administration.

This change came about because the agency wanted to see bleeding data one year after patients’ FIX levels reached a steady state, which takes around six months after the gene therapy is given.

The upshot of the latest change is that etranadez will now not be filed until the first quarter of 2022.

Whether this might give competitors an edge is an open question. During yesterday’s conference call, Uniqure execs suggested that other haemophilia B players might meet similar demands.

Following the discontinuation of Sangamo’s SB-FIX and Takeda’s TAK-748, Uniqure’s main rivals are Pfizer/Roche’s fidanacogene elaparvovec and Freeline’s FLT180a. Fidanacogene elaparvovec is in phase 3, but Pfizer has been vague about when data might be reported. Meanwhile, Freeline has been held up; having hoped to go straight into phase 2/3 following encouraging early data last year, it is now conducting a dose-confirmation study and CMC work ahead of phase 3.

On the plus side for Uniqure, etranadez's effect looks durable, something that cannot be said about haemophilia A gene therapies.

At one-year, patients receiving the Uniqure project showed mean FIX activity of 42% of normal, up from 39% at six months. These levels are akin to those seen in patients with mild haemophilia.

There were also reductions in annualised bleeding rates, including an 80% decrease in bleeds needing FIX treatment compared with the six-month lead-in period, during which patients received prophylactic FIX therapy.

These data could provide reassurance ahead of the 18-month readout, expected towards the end of this year, and the sellside is confident that etranadez is still on track for approval. However, with the FDA seemingly getting tough on gene therapies, perhaps investors fear another spanner in the works. 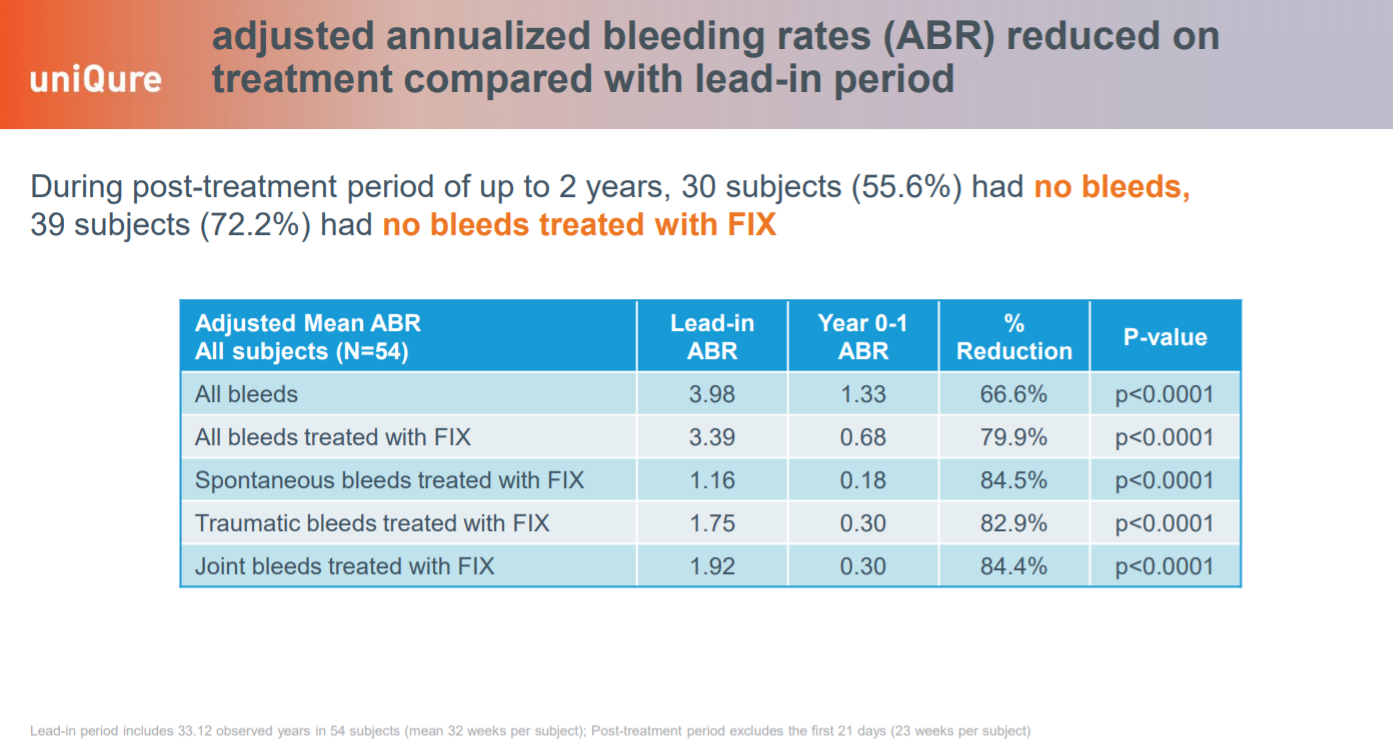