89bio shows less can be more in Nash race

When Akero came out with its “game changing” Nash data in July, it looked like the company had set a very high bar for others to beat. Today, 89bio has risen to the challenge with phase 1b/2a data for BIO89-100, another FGF21 stimulator, showing a 70% reduction in liver fat versus placebo after 13 weeks. Equally as important, the project appeared to have a much better safety profile than Akero’s efruxifermin, as well as the potential for a fortnightly dosing schedule. While cross-trial comparisons are difficult, observers focused today on BIO89-100’s similar efficacy to efruxifermin at comparable doses. However, it should be remembered that the upper limit of BIO89-100 dosing was 27mg weekly, compared with 70mg for efruxifermin. It is this lower dosing level that might have helped BIO89-100 avoid some of the toxicity that troubled subjects taking efruxifermin; however, at higher doses efruxifermin was more efficacious. But given that many Nash patients remain largely asymptomatic, the so-far lack of serious side effects with BIO89-100, in particular tremor, will almost certainly be played up by 89Bio. 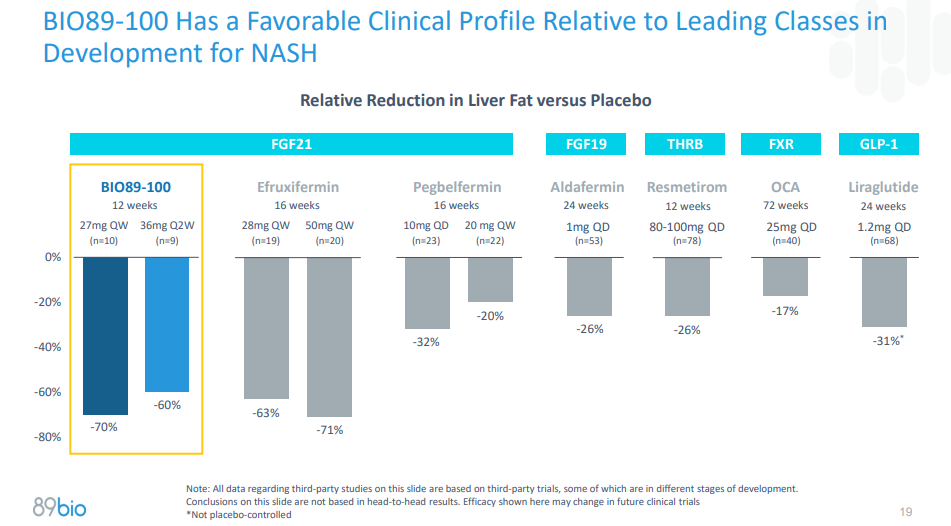