Astrazeneca’s Epanova, the fish oil rival to Amarin’s approved Vascepa, had been forgotten after its massive Strength trial was terminated for futility. But it still has implications given that Vascepa’s mechanism remains unclear. Over the weekend an American Heart Association late-breaker revealed Strength’s analysis for the first time, laying bare the conundrum. MACE, the composite primary endpoint, had been recorded in 12.0% of Epanova subjects versus 12.2% for control (p=0.84), and there was “no correlation at all” between the levels of eicosapentaenoic acid (EPA), which Epanova increased by 269% – or of docosahexanoic acid (DHA) – and outcome, said Cleveland Clinic’s Dr Michael Lincoff, Strength’s principal investigator. Amarin bulls have argued that Vascepa’s activity is due to it being a pure EPA, whereas Epanova additionally contains DHA, which can “mask” EPA’s benefits, but Strength does not support this. Also, Strength used a neutral corn oil placebo, possibly reigniting debate around the Amarin trial, which compared Vascepa against a mineral oil that might have worsened control subjects’ outcomes. There were increases in adverse events with Epanova, findings that cast "uncertainty of whether there is a net benefit or harm with any of the Omega-3 fatty acid preparations”, said Dr Lincoff. 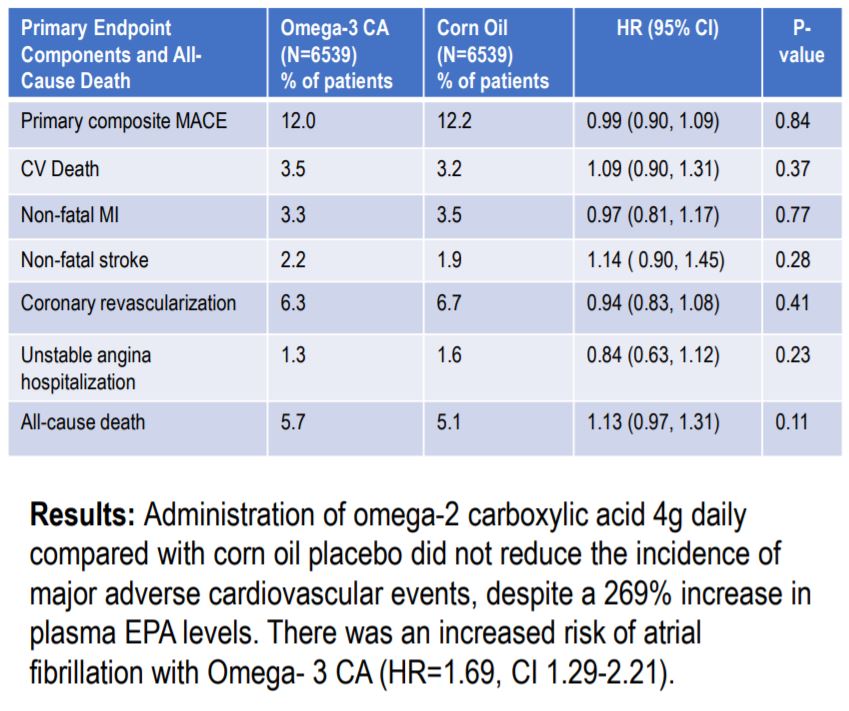