Axsome advances in agitation, but confirmatory study is still needed

Despite a strong placebo response, not untypical for neuropsychiatry studies, Axsome bagged a win in Alzheimer’s disease agitation today. The pivotal phase II/III Advance-1 study pitted AXS-05 against placebo or bupropion, one of AXS-05’s components. AXS-05 met the primary endpoint, change from baseline in CMAI total score, a 29-item scale to assess agitation − a relief after last month's failure with the same project in treatment-resistant depression. The clinical need in Alzheimer’s disease agitation is dire; antipsychotics are often used off-label, but come with black box warnings of an increased risk of mortality in elderly patients with dementia. AXS-05 showed an encouraging safety profile, and investors were obviously impressed − Axsome shares surged 30% at market open. However, a second trial will be needed for filing, Axsome said on a call today, and this is often where neurology projects are scuppered by marked placebo responses. An example of this is Avanir’s AVP-786. This asset is mechanistically similar to AXS-05, and showed mixed results in two phase III studies in Alzheimer’s disease agitation. A third trial is ongoing. 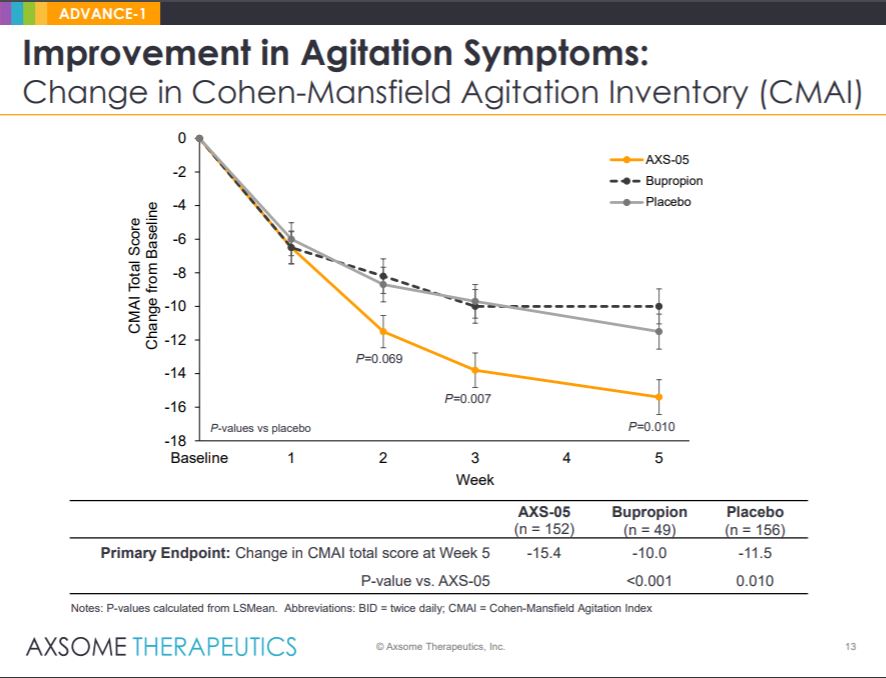 Axsome jumps on the happy train