Already in dire trouble when its stock fell 70% on a woeful efficacy showing by its Duchenne muscular dystrophy gene therapy SGT-001 in February, Solid Bioscience has suffered again. The group has lost more than a third of its remaining value so far today after a patient in the same trial, Ignite-DMD, experienced worrying toxicity. Solid had continued with the trial despite the poor expression of the microdystrophin transgene in the first three patients, and had ramped up the dose; this appears to have backfired badly. The only patient to take the higher 2x1014 vg/kg dose of SGT-001 experienced a gastrointestinal infection unrelated to the drug and a transient decline in platelet count that was drug-related but non-serious. However, the elevation of transaminases and increase in bilirubin higher than twice the upper limit of normal, indicating potential liver injury, had to be reported to the FDA as a drug-related serious adverse event. Despite this latest setback Solid is ploughing on and Ignite-DMD patient enrolments are set to continue. Preliminary data are due in the second half of this year; alongside safety, investor focus will return to efficacy – this should give a clearer idea if Solid, which only has enough cash to get it to early 2020, has a real future in this space. 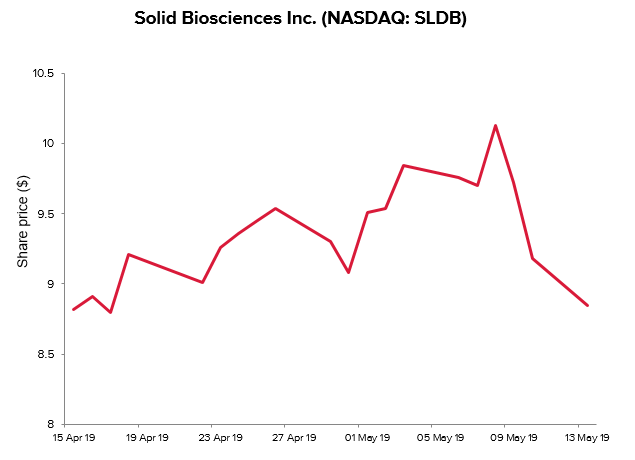 Another dystrophy catastrophe for Solid Biosciences