But a serious adverse event and waning enzyme levels raise questions about the data.

4D Molecular Therapeutics surely hoped to impress with data from the first three patients treated with its Fabry disease gene therapy 4D-310. And the headline biomarker results were eye-catching – but concerns about toxicity and ebbing efficacy, which often scupper gene therapy projects, have hit this asset early.

4D-310 aims to deliver the gene encoding the enzyme alpha-galactosidase (AGA), which is missing in Fabry patients; absence of AGA causes accumulation of a particular glycolipid in blood vessels and organs, impairing their function. An interim cut from a phase 1/2 trial of 4D-310, detailed late yesterday, concerned just three patients, but the results were striking.

Patients one and three had average post-treatment serum AGA enzyme levels of 248.1nmol/hr/ml and 209.3nmol/hr/ml – respectively corresponding to 2,506% and 2,114% of mean normal levels.

Patient two was a relative disappointment, only attaining AGA levels of 5.7nmol/hr/ml, 58% of mean normal levels. 4D said that this patient had particularly high anti-AGA antibodies at baseline, and pointed out that this result still represented a significant increase in activity.

According to Evercore ISI analysts, patients with high anti-AGA titres will be excluded from the trial in future, but this should make little difference to the potential reach of 4D-310 since only around 5% of Fabry patients fall into this category.

Safety was just about acceptable, with patients one and three showing no signs of atypical haemolytic uremic syndrome (aHUS) or liver toxicity, the two primary class-related toxicities associated with systemically administered adeno-associated virus vectors. Patient two did develop aHUS a week or so after treatment and was admitted to hospital, but was discharged after four days, and did not need complement inhibitors or dialysis. This counts as a serious adverse event, though 4D said the trial saw no dose-limiting toxicity.

This will be something to keep an eye on as more patients are treated. There has been no suggestion that extremely high levels of AGA can in themselves have adverse effects, but this too might be something to watch.

The data came from the study’s lower dose level, 1x1013vg/kg. Dosing at 3x1013vg/kg is also planned, though caution might be warranted here given the high levels of AGA and the serious adverse event. Indeed, 4D might actually add a lower dose to the trial if the full data back such a move, Evercore suggested.

But will the data hold up? 4D’s presentation of the data showed a clear sliding of AGA levels over time: in patient one, for instance, they had roughly halved by 25 weeks post-dosing from the week-eight peak. Admittedly, levels were still very high, at least in patients one and three, and 4D believes enzyme expression should stabilise after a few months, but this raises doubts about whether 4D-310 will fulfil the promise of a once-and-done gene therapy. 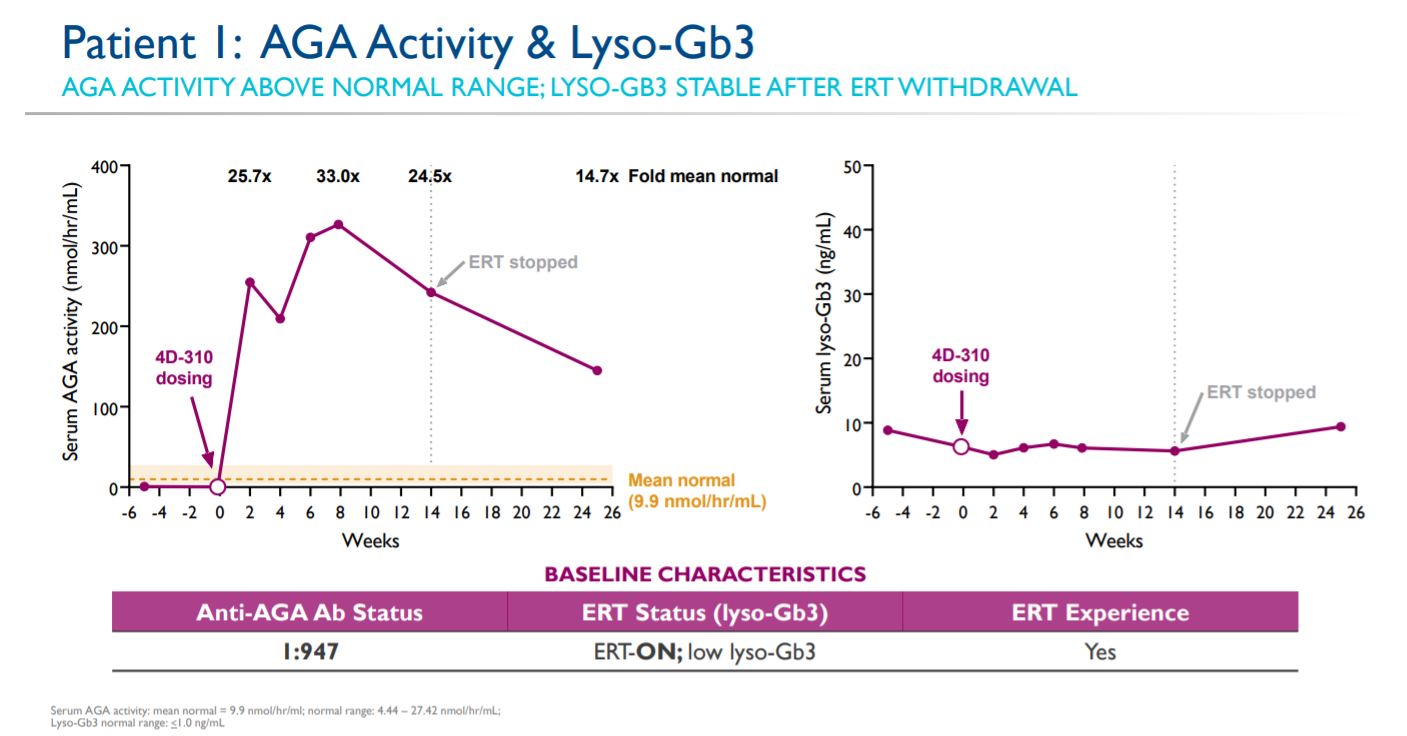 Then there are the more obvious limitations of the data so far, with no information on how 4D-310 might affect Fabry symptoms, such as numbness, pain, heat or cold intolerance, flu-like symptoms of gastrointestinal problems.

And the protocol calls for the recruitment of a further 15 patients; it is very possible that biomarker activity in these subjects could fall short of what has been seen to date.

4D now intends to start a second phase 1/2 trial, this time in Asia-Pacific, in which patients will undergo cardiac biopsy to assess gene delivery.

There are a handful of other gene therapies in early-stage trials for Fabry disease, and data on one of them, Freeline’s FLT190, should appear by the end of the year (Idorsia’s Fabry flop puts focus on gene therapies, October 12, 2021). If nothing else, 4D has given it a target to aim for.

Sangamo takes on 4D in Fabry