The group gets a win in severe hypertriglyceridaemia, but a bigger readout in Nash awaits.

Targeting fibroblast growth factors in cardiometabolic diseases has not always gone smoothly. But 89bio has prevailed in a mid-stage study in severe hypertriglyceridaemia with its sole project, the subcutaneous FGF21 analogue pegozafermin.

The company immediately followed the news with a $75m offering, helping explain this morning's muted stock market response – 89bio shares rose just 3% at the open. But investors might also have an eye on a readout next year in a bigger opportunity, Nash – and here 89bio has plenty of competition.

The phase 2 Entrigue trial evaluated various doses of pegozafermin in patients with severe hypertriglyceridaemia, defined as triglyceride levels of 500mg/dl or greater. Around half of patients were on background therapy, including statins and prescription fish oils.

The primary endpoint was the change in triglycerides from baseline, versus placebo, at eight weeks.

Before the readout, SVB Securities analysts had said a triglyceride reduction of 40-50% or more would be considered a “home-run scenario”. This was achieved at all weekly doses, with the highest dose tested, 27mg weekly, looking particularly impressive. These figures also look good when compared with the 27% decline in triglycerides seen with Amarin’s Vascepa. 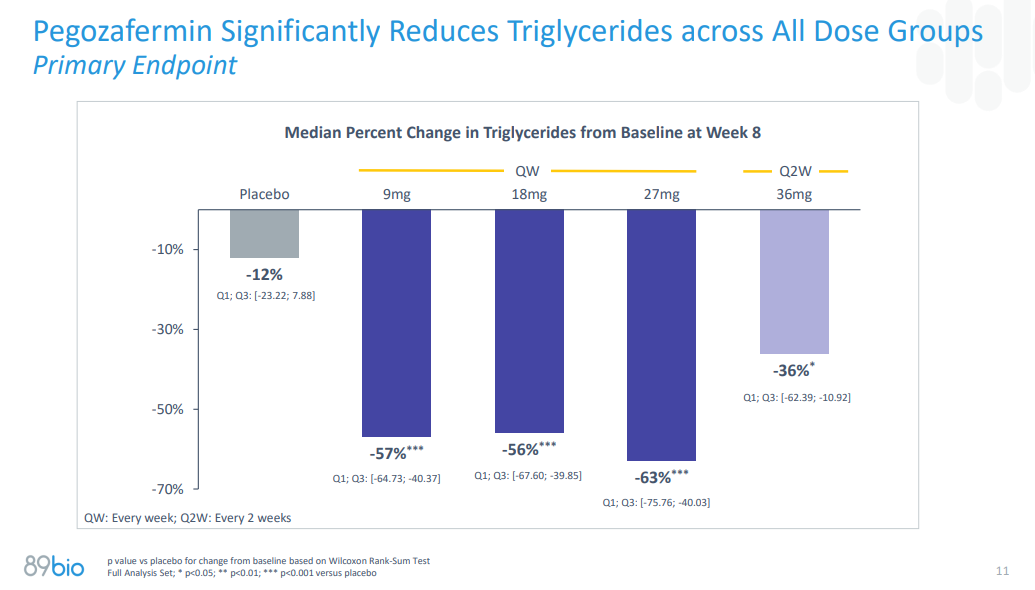 However, there are reasons to be cautious about the 27mg/week dose of pegozafermin: the trial’s two treatment-related discontinuations came in this cohort, one due to abdominal cramps and one due to nausea and vomiting. Overall, 22% and 17% of patients in this dose group experienced nausea and diarrhoea respectively.

89bio has not yet said which dose it will take forward into a phase 3 study, slated to start in the first half of next year. If this is successful, the group plans to seek approval based on triglyceride lowering – it believes that it will not need a cardiovascular outcomes trial.

SVB reckons that pegozafermin sales in severe hypertriglyceridaemia could peak at around $650m – while this is a substantial sum it is dwarfed by the $3bn the analysts have forecast for the project in Nash.

There are good reasons for investors to be jittery about Nash, which has proven a tough indication to crack. And frayed nerves might not have been helped by 89bio recently making several changes to its Enliven mid-stage trial in Nash, including skewing enrolment towards high-dose arms and adding secondary composite histology endpoints to try to “help stabilise the placebo response”.

A competitor might soon provide an indication of whether Enliven has a chance: Akero Therapeutics is due to report data from the Harmony trial of its FGF21 stimulant in Nash next quarter.

However, other FGF21 projects have already disappointed, with Bristol Myers Squibb last year discontinuing pegbelfermin, which it had been developing for Nash. Novo Nordisk also shelved NN9499 in obesity, although it is still pursuing an FGF21 asset in Nash.

Upcoming events – Bayer and Merck look to vericiguat, and Akero bets on Nash

89bio shows less can be more in Nash race