A pivotal hit in allergic conjunctivitis could also bode well for upcoming readouts in the bigger indication of dry eye disease.

Aldeyra Therapeutics could soon have the first novel allergic conjunctivitis therapy in decades. Its lead project, reproxalap, has delivered a convincing topline win in Invigorate, the second pivotal study of the asset to hit in the disorder.

Perhaps more importantly for Aldeyra, the result could bode well for the much bigger indication of dry eye disease, where phase 3 data with reproxalap are due in the second half of the year. Sellside consensus puts 2026 allergic conjunctivitis sales at $106m, versus $391m in dry eye disease, according to Evaluate Pharma.

Invigorate, comparing reproxalap versus vehicle, hit its primary endpoint, ocular itching. But all eyes were on its key secondary endpoint, ocular redness, as this is the primary outcome measure of the upcoming Tranquility-1 and 2 pivotal trials in dry eye disease.

Here, Invigorate also showed a benefit. There are some differences between the designs of the Invigorate and the Tranquility trials, but there are similarities, and Aldeyra execs were keen to point to the potential read-across to dry eye disease during a conference call this morning. The company’s stock opened up 17%.

Aldeyra had hoped to show a benefit on itching across most of 11 prespecified timepoints 110-210 minutes after patients had entered the chamber. In fact, reproxalap was superior to vehicle across all 11 timepoints, with a p value below 0.001 at each. 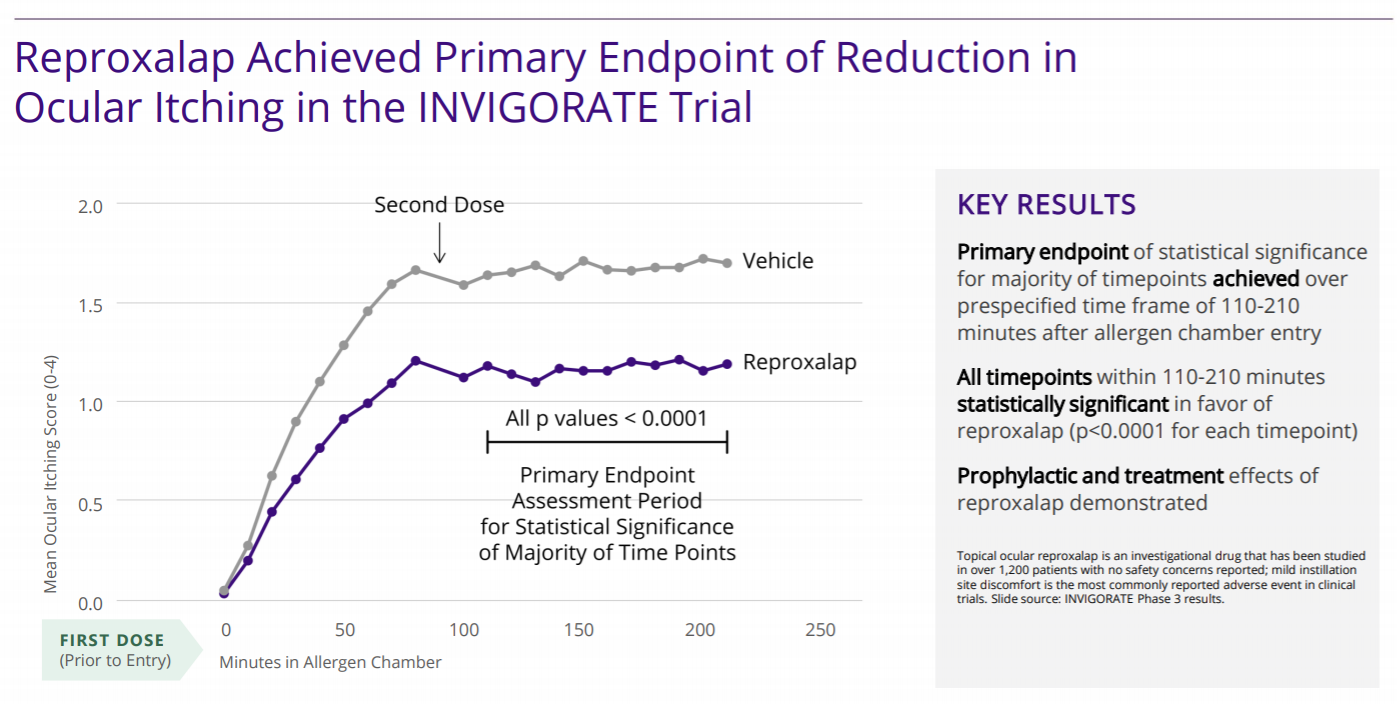 The latest success adds to a win in the pivotal Alleviate allergen challenge study two years ago (Aldeyra seeks to Alleviate worries with conjunctivitis win, March 26, 2019).

With many analysts apparently assuming that approval in allergic conjunctivitis is now a formality, questions today focused on how reproxalap might be positioned if it reaches the market.

Aldeyra believes that it would be used after over-the-counter antihistamine eye drops, but before steroid eye drops, which cannot be used chronically owing to side-effects including glaucoma and cataracts. In contrast, reproxalap’s safety profile in Invigorate looked benign, based on the limited data released so far.

Aldeyra will now need to carry out a six-week safety study before it can file reproxalap in allergic conjunctivitis. Management said the group was prepared to launch alone, but might end up partnering the asset.

The allergic conjunctivitis pipeline is sparse: according to Evaluate Pharma, reproxalap is the only project in active late-stage clinical development. Dry eye disease, meanwhile, is much more crowded (Bausch boosted ahead of eye spin-off, April 14, 2021).

Still, if reproxalap can prevail in the Tranquility trials it has a chance to make a mark here, particularly as incumbent drugs like Abbvie’s Restasis and Novartis’s Xiidra leave much to be desired. And approval in both allergic conjunctivitis and dry eye disease would be an advantage as there is around 50% overlap between the two disorders.

Aldeyra’s dry eye studies are also based on a chamber challenge model, but in this case dry air, rather than an allergen, is used as an irritant.

Perhaps the most important difference, however, is dosing. The Tranquility studies have a two-day regimen in which patients receive either reproxalap or vehicle four times on day one, then on day two they are dosed just before entering the chamber, and again 45 minutes into the chamber.

As patients are being exposed to more drug than in Invigorate, investors have another reason to hope for success in the Tranquility trials. They do not have too long to wait to find out.

Aldeyra eyes its next phase

Persistence pays off for Kala