Pivotal data validate Aldeyra’s lead project, reproxalap, but there are questions about a lack of dose response.

Aldeyra’s four lead programmes involve its Rasp inhibitor reproxalap, so it is no wonder that positive phase III results in the Alleviate trial in allergic conjunctivitis sent the group’s stock soaring today. Notably, the data appear to bode well for the project’s chances in dry eye disease, where it is about to start pivotal development.

Still, Aldeyra could not explain why the lower 0.25% dose appeared to do better than the 0.5% formulation in Alleviate. The group now needs to carry out a second phase III study in this use, in which it will only test 0.25%.

On a conference call today, Aldeyra executives were pressed for more details on the next pivotal allergic conjunctivitis trial, but maintained that they would not say more until the second half of the year, once they had met the FDA.

Allergic conjunctivitis is caused by allergens such as pollen and dust mites. Alleviate involved an allergen challenge directly into patients’ eyes, then subsequent treatment with reproxalap ophthalmic solution – also known as ADX-102 – or vehicle.

The second phase III trial could be another conjunctival allergen challenge study, or it could involve environmental exposure to the allergen in question; the latter would either take the form of natural outdoor exposure during the allergy season, or via an allergen chamber.

For the environmental challenge, Aldeyra said it was assessing both options, but using an allergen chamber would seem preferable, being a more controlled environment with fewer potential confounding factors.

For now, the group is riding high after reporting that the Alleviate trial met its primary endpoint, showing a significant reduction in ocular itching with reproxalap, as assessed by area under the ocular itch score curve from 10 to 60 minutes after allergen challenge.

The company also claimed a victory on a key secondary endpoint, the two-point responder rate. 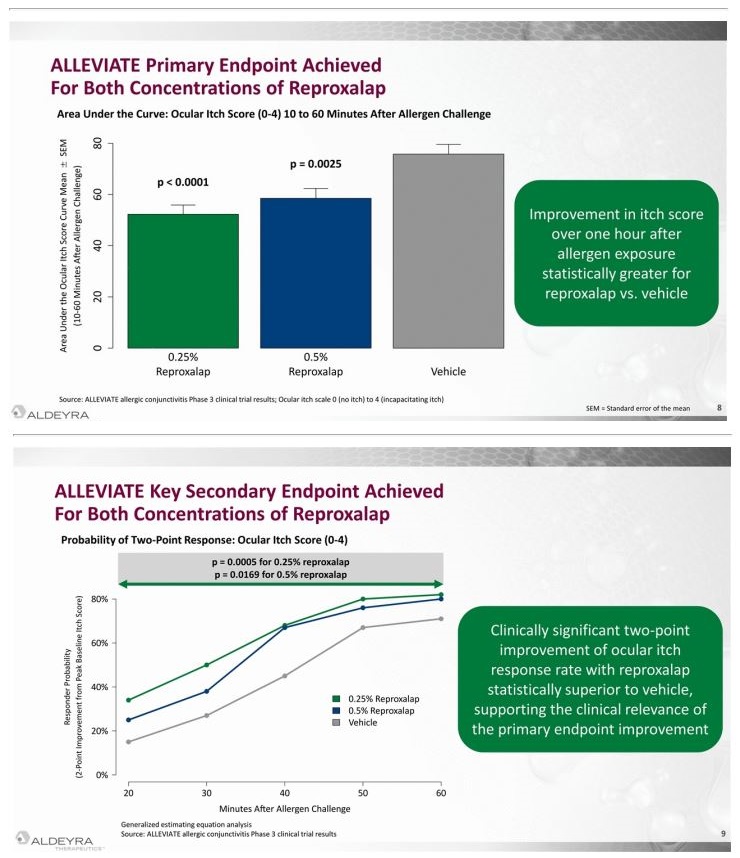 Still, lack of dose response meant that the data were not completely rosy for Aldeyra. When questioned about this, the group’s chief medical officer, David Clark, claimed that there was no statistical difference between the performance of the two doses.

Interestingly, 0.25% is the dose the company plans to test in its upcoming phase III dry eye disease trial, Renew, which is to start this half. The company’s stock opened up 69% today, but within a couple of hours it had fallen back slightly to a 44% increase over yesterday’s close.

Aldeyra estimates that reproxalap could address around 30 million patients with allergic conjunctivitis – primarily those dissatisfied with the current standard of care, antihistamines – and around 20 million with dry eye disease.

It noted that around 10 million patients had both disorders and said reproxalap could become a new option in this population. However, patients who also had dry eye disease were excluded from the Alleviate trial. Dry eye accounts for the bigger chunk of the project’s forecast, according to EvaluatePharma sellside consensus.

Aldeyra is also evaluating reproxalap in another eye disease, noninfectious anterior uveitis, with data from the Solace phase III trial due in the second half of 2019.

Also in the second half, the group expects pivotal data with a topical dermal formulation of reproxalap in Sjögren-Larsson syndrome. Aldeyra has several other candidates in clinical development, and its packed pipeline will require a heavy investment, perhaps explaining why the group took out a $60m loan today.

Perhaps this means that Aldeyra will buck the biotech trend of putting out positive data and then raising money on the public markets. But maybe the company, which had around $93m in cash at the end of the year, will still take its chance to bring in funds when it can, rather than when it has to.

Aldeyra eyes its next phase