As durability continues to fog the future for Biomarin’s gene therapy, Pfizer and Sangamo keep up the pressure.

Biomarin is ahead of rivals with its valrox gene therapy for haemophilia A, but in the end this might not count for much. Four-year data released at the World Federation of Hemophilia’s annual meeting showed treated patients’ clotting factor continuing to fade over time.

At the same conference Pfizer and Sangamo unveiled the longest-duration data seen so far for their candidate, SB-525. With a maximum of 61 weeks' follow-up there is still much to learn about this project, but the signs are certainly encouraging, with no patients experiencing bleeding events or requiring factor VIII infusions so far.

The partners presented an update on five subjects who received a 3x1013vg/kg dose of the therapy, now generically known as giroctocogene fitelparvovec. Factor VIII activity levels, measured by chromogenic assay, were sustained at a median of 64.2%, according to a press release on the data.

It is too soon to gauge the durability of this response, although it is notable that Pfizer and Sangamo are generating this level of activity with a lower dose than Biomarin. That company’s valrox has been filed for accelerated approval at 6x1013vg/kg; a first look at results in seven patients who were given this dose four years ago was also presented at WFH this week.

This showed another decline in Factor VIII activity – dropping to a median 16.4% from 19.9% at the three-year mark (Biomarin suffers minimal bleeding on valrox readout, May 28, 2019). 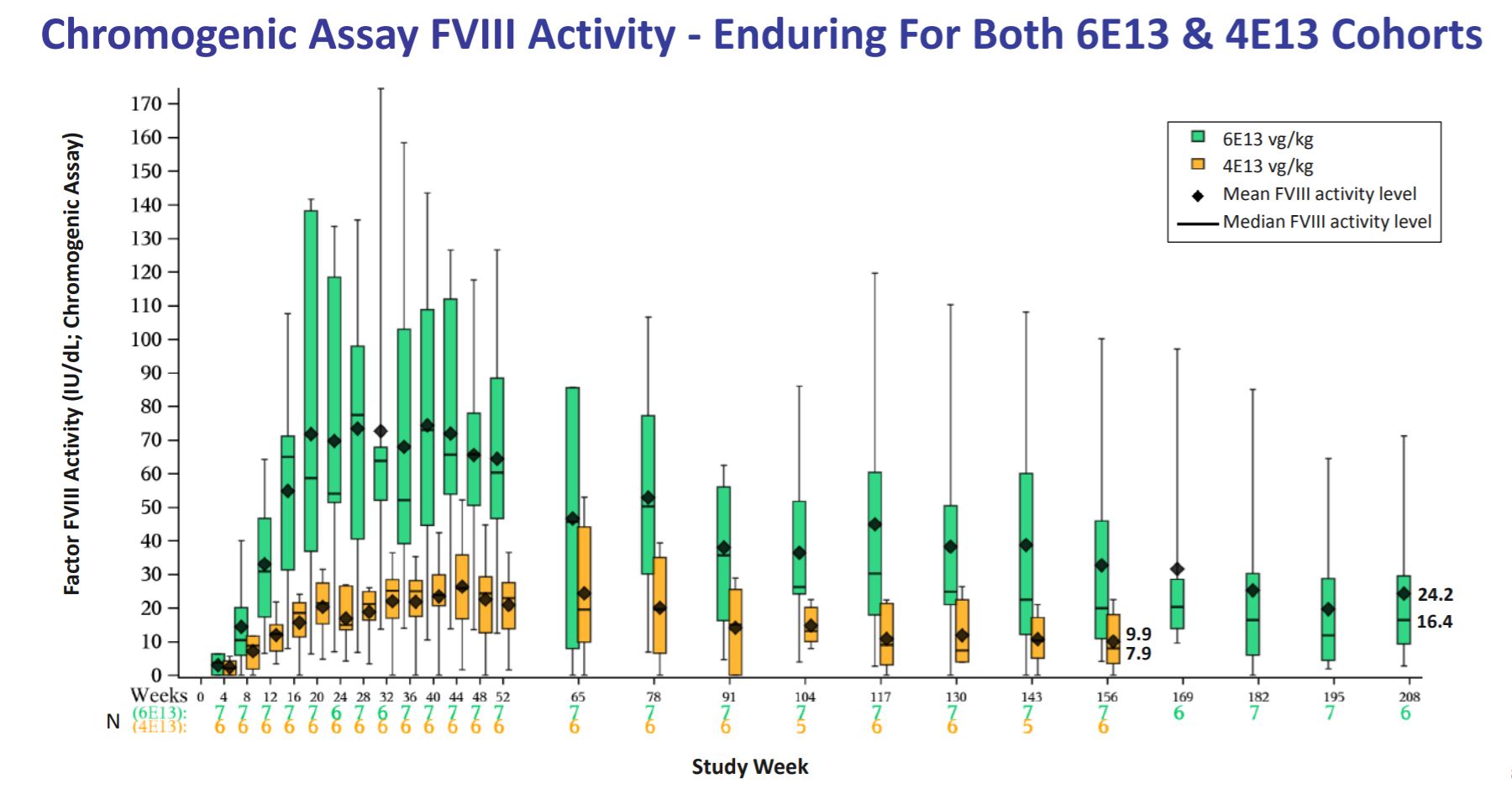 Supportive sellside analysts at Stifel noted that the rate of decline was slowing, but it seems likely that at some point clotting factor could drop below useful levels.

For now most patients are still benefiting. The average number of bleeds per year has dropped from 16.3 to 1.3, compared with 136 a year before the gene therapy.

It is encouraging that these measures have remained steady even as gene expression fades, and it seems highly likely that EU and US agencies will allow Biomarin to start selling the product in the next couple of months.

But questions around durability will complicate negotiations between the company and payers as a price point is negotiated, and make for a very difficult choice for patients, as they try to decide whether to wait for other gene therapies in the works that might prove more durable.