Amgen tries something new in obesity

Early data are promising, but the upcoming phase 2 trial has questions to answer.

A number of questions have been raised by the phase 1 data presented on Amgen’s obesity agent AMG 133 at the weekend, and one of the most intriguing is to do with the project’s unusual mechanism.

Uniquely among the combination therapies in clinical development for metabolic disorders, AMG 133 is a GLP-1 receptor agonist but a GIP receptor antagonist – most of the others, including Lilly’s highly effective Mounjaro, are dual agonists. There is some concern about how inhibiting GIP might affect the blood sugar levels of diabetic patients, and this will be one of the aspects investigated in the planned phase 2 trial, Amgen management said on a call today.

Anyone seeking answers to this question from the phase 1 obesity trial of the project, presented at the WCIRDC meeting on Saturday, will be disappointed: the study did not enrol diabetic patients. The phase 2 trial Amgen is planning to start early next year will include diabetics, so data on this issue could come in a year or so.

Meanwhile, the phase 1 obesity data are indeed encouraging, though early.

The trial was split into two arms, one assessing single and the other multiple subcutaneous doses. The single doses ranged from 21mg to 840mg, with the average number of patients in each group in this part of the trial being roughly six; 12 patients received placebo.

The multiple dose arm, though, is by far the most important since this gives insight into how the agent might be used in the real world.

Here patients received three doses, a month apart, of either 140mg, 280mg or 420mg, with eight patients in each dose group. Those receiving the highest dose lost 14.5% of their total bodyweight after around three months’ treatment, or 16% on a placebo-adjusted basis.

By approximately day 125, the patients started to put weight back on, though patients given the highest dose had still lost 10% of their body weight at day 207 – two and a half months after their last dose. Another point for Amgen to answer in future will be how easily weight loss can be maintained; the company is going to investigate quarterly maintenance dosing in phase 2, it said today, as well as longer time points in far more patients – including diabetics.

Safety was clean enough in phase 1. Adverse events were mostly mild for all doses, with most being gastrointestinal and resolving within 48 hours. There were no discontinuations. 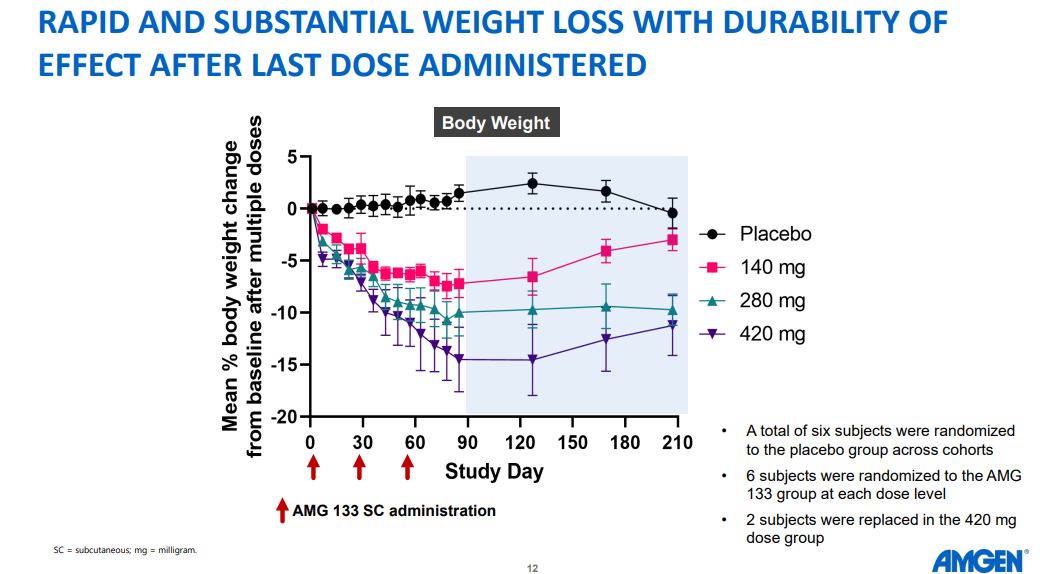 So far AMG 133’s effects look competitive with what was seen with Novo Nordisk’s Wegovy and Lilly’s Mounjaro at similar time points in their pivotal obesity trials. In Step-1, Wegovy managed weight loss of approximately 6% at 12 weeks – though these patients did have comorbidities including diabetes – and the highest dose of Mounjaro allowed weight loss of around 9% at the same time point in the Surmount-1 study.

Novo and Lilly’s therapies are dosed weekly; as a monthly therapy, AMG 133 could have an advantage here, which would be even more pronounced if quarterly dosing does work out.

But AMG 133 is a long way behind these two competitors. And the conjugate’s effects on diabetic patients’ blood sugar will be scrutinised closely. If its showing in later trials means it can be used only in obese patients without diabetes, its market will be hugely limited.

Lilly’s Mounjaro has a mountain to climb

Novo Nordisk aims to beat its own blockbuster