After the Valor defeat, the group and its partner Biogen will hope that going earlier could improve the amyotrophic lateral sclerosis project’s chances.

The amyotrophic lateral sclerosis field has had more than its fair share of disappointments. The latest one came yesterday, with the failure of Biogen and Ionis’s Sod1-targeted project tofersen in the phase 3 Valor study.

Bulls are clinging to a decrease seen in a biomarker of axonal damage, neurofilament light chain, with some believing that this could pave the way to an accelerated approval. Even sellside analysts poured cold water on this idea, but the companies do have another shot with an ongoing trial in presymptomatic ALS.

For now, though, tofersen’s future looks dim. This might not be such a big deal for Biogen: Sod1 mutations only account for around 2% of ALS patients, and the market for tofersen was always expected to be small. The group’s stock sank just 1% this morning.

It is a bigger blow for Ionis and its antisense approach more broadly, especially after the failure of the Roche-partnered Huntington’s project tominersen earlier this year. Ionis’s stock was down as much as 12% this morning.

The better part of Valor

The data from Valor, presented at the American Neurological Association meeting, raised many questions, but there is no doubt that the study failed. It did not meet the primary endpoint, change in the revised amyotrophic lateral sclerosis functional rating scale (ALSFRS-R) at 28 weeks versus placebo.

There was no benefit on ALSFRS-R in either subgroup studied: those with fast-progressing disease – the primary analysis population – or slowly-progressing ALS. 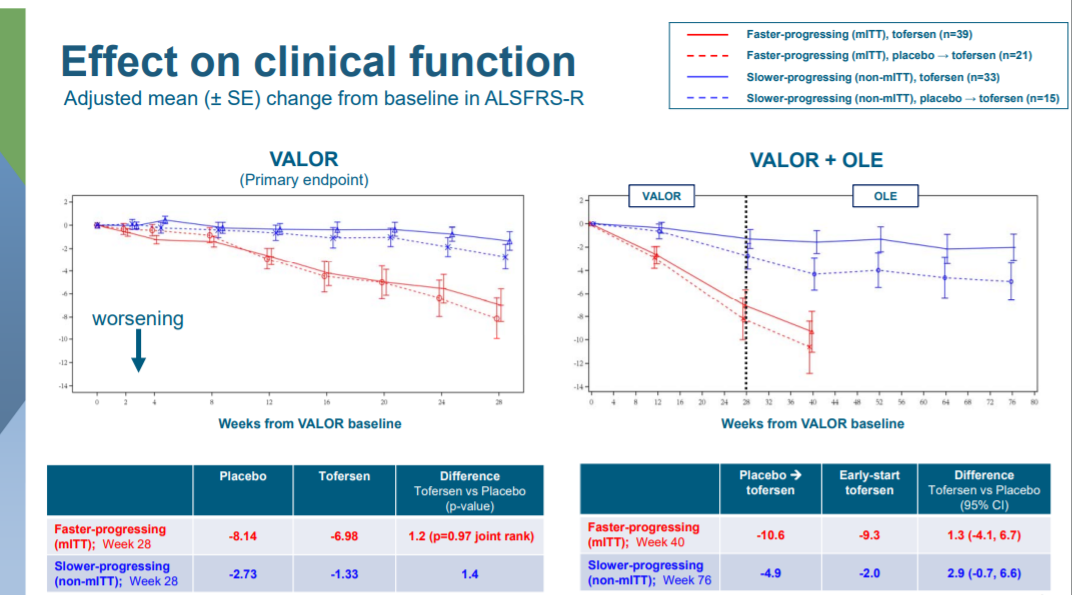 However, some believe there are glimmers of hope to be found. For a start, tofersen did what it was designed to do: decrease levels of Sod1. In patients with this mutation, aberrant Sod1 protein is prone to misfolding, resulting in toxicity; the theory was that hitting this protein could slow disease progression.

One question now is why, in the case of tofersen, this did not lead to an improvement in function. Stifel analysts noted that the magnitude of Sod1-lowering, at 30-40%, was only “moderate” and added that the short trial duration might provide another possible explanation for the failure.

Bulls were also encouraged by a 50-60% reduction in neurofilament light chain (NfL) in tofersen-treated patients. This suggests that the project could be slowing neurodegeneration; it is notable that some multiple sclerosis drugs are associated with decreases in NfL.

However, even Stifel, self-proclaimed “believers” in NfL as a surrogate biomarker in neurology, questioned whether the NfL result would be enough for approval, particularly given the clear miss on Valor’s primary endpoint.

Leerink agreed, writing: “We don’t see how Biogen would be able to proceed with a filing with this data.” Biogen itself has not disclosed its plans, but said it was “actively engaging with regulators” to determine the next steps.

Adverse events could give the likes of the FDA pause: there were four severe neurological events in the tofersen arm, including two cases of myelitis, versus no such events in the placebo cohort. However, in a disease like ALS, this level of risk would probably be acceptable.

The lack of efficacy is concerning, but it is possible that earlier therapy is needed. As with many neurological diseases, protein aggregates can form well before the onset of symptoms.

Biogen and Ionis are already testing this theory in the Atlas trial, which is enrolling presymptomatic subjects with Sod1 mutations and elevated levels of NfL. The primary endpoint is the proportion of participants with emergence of clinically manifest ALS within 12 months of randomisation, but data might be a while – according to clinicaltrials.gov, the study is set to complete in 2026.

Ionis and Biogen have other genetically targeted neurology projects in the works, but today's investor disappointment suggests that hopes might have dimmed for these approaches more broadly. In ALS the companies are partnered on BIIB078, a phase 1 project aimed at a genetic form of the disease, C9orf72-associated ALS, and they are developing various genetically targeted agents in the CNS space more broadly. Ionis also has a wholly-owned phase 3 asset, ION363, designed for those with mutations in the FUS gene.

A recent analysis by Evaluate Vantage found plenty of mid-to-late-stage assets in development for ALS, as the table below shows. But Biogen and Ionis just reminded investors that getting a result in this disease is easier said than done.

This table has been updated to include Coya Therapeutics' ALS001.