But whether data on the novel anaemia pill are clean enough to dispel wider FDA toxicity concerns is hard to call.

Questionable results from rivals meant that Glaxosmithkline was always going to have to work hard to convince of the safety of daprodustat. Data from the project’s huge pivotal programme should make the company’s job easier, with presentations over the weekend throwing up few serious concerns.

The big unknown is whether daprodustat, a novel type of anaemia pill, will make it to the US market. Largely this is because of the FDA’s resounding rejection of Fibrogen and Astrazeneca’s roxadustat earlier this year, on cardiac and other safety issues that some suspect to be a class effect.

At the very least Europe approval of daprodustat seems assured, given the EMA’s acceptance of roxadustat’s much more questionable results. However, Glaxo could well need US approval to make daprodustat pay.

The UK pharma group does not have a huge presence in nephrology or anaemia, but its executives confirmed this weekend that a marketing partner in the US or Europe for dapro would not be sought. That deal would have been tough to negotiate before the FDA's verdict, which is unlikely to come until the end of 2022, and possibly even in early 2023.

This means that, for now, daprodustat will remain something of an unknown quantity in Glaxo’s pipeline, just when the company needs to prove that it can develop and deliver blockbusters.

It is unfortunate for Glaxo that this level of uncertainty would probably not exist had daprodustat been the first of the HIF-PH inhibitors to yield pivotal data. But the dapro data are being very closely scrutinised after cardiac signals emerged in both the programmes for roxadustat and Akebia’s vadadustat.

The American Society for Nephrology’s annual meeting heard various presentations this weekend from the Ascend pivotal programme of the Glaxo project. This was conducted in two distinct populations of patients with anaemia caused by chronic kidney disease: pre-dialysis and those already on dialysis.

What is already widely accepted, and the Ascend data confirm for daprodustat, is that these drugs are able to boost haemoglobin levels at least as effectively as erythropoietin (Epo) agents. Safety is the outstanding issue, and two large cardiovascular outcome studies, Ascend-ND and Ascend-D, both found daprodustat to be non-inferior to Epo on time to first major adverse cardiovascular event (Mace). 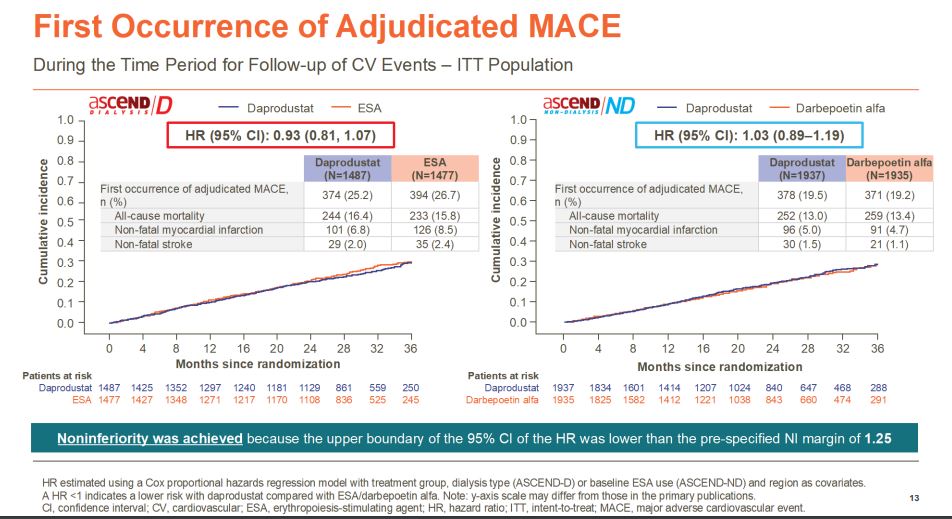 “I think this is a remarkably good report,” Dr Jay Wish, a nephrologist and Professor of Clinical Medicine at Indiana University School of Medicine who had no involvement in any of the daprodustat Ascend trials, told Evaluate Vantage. He said he would have no problem prescribing daprodustat to appropriate patients should it become available, and was not hugely alarmed by any of the safety findings.

A couple of issues stood out for him, however. One was a higher rate of gastric erosions in the daprodustat arm, and another was a higher rate of stroke in a third trial called Ascend-TD, though the numbers involved in both cases were small. He was not unduly concerned about an apparent cancer signal, which was also called out in an editorial accompanying the Ascend data in the New England Journal of Medicine.

These will no doubt be areas of debate for regulators. However, Dr Wish brushed off the observation that the hazard ratios for the various cardiovascular outcome measures in the non-dialysis population tended to cross 1; in the on-dialysis trial these hazard ratios all came in below 1. The upper bound for non-inferiority, as set by the FDA, was 1.25, which was not crossed in either trial.

“There's always going to be a little variability around 1. We can still consider this to be a non-inferior finding,” he said.

On a call held by Glaxo for sellside analysts, Dr Ajay Singh, the primary investigator for Ascend, was also pressed on this issue. “These trials were designed to demonstrate non-inferiority in an intent-to-treat population and that’s what we did. To compare [the hazard ratios] in D and ND … it doesn’t concern me.”

Dr Singh said that he saw no alarming safety signals in the data. “I’m pretty sanguine that daprodustat is comparable to [Epo] in both populations,” he said.

At the ASN presentation Dr Singh had earlier stressed that in the dialysis trial the hazard ratio for Mace plus thromboembolic event had actually favoured daprodustat, with a hazard ratio of 0.88. This was probably a nod to the thrombosis signal in the roxadustat (Evrenzo) on-dialysis data, which contributed to that drug’s FDA rejection.

The Ascend data certainly seem to give daprodustat the best chance, among the HIF-PH inhibitors, of getting to the US market in both dialysis and non-dialysis patients. But throw in existing concerns about the class and a couple of potential safety signals in the pivotal programme, and it becomes very hard to predict how rough its regulatory ride might get.

A clue could come when the FDA review of Akebia’s vadadustat concludes – the project has a March 22 Pdufa date and an advisory committee meeting is widely expected to be held. The cardiac toxicity signal in the pivotal non-dialysis trial makes a green light unlikely in these patients, though Dr Wish believes that vada has a chance at approval in dialysis patients.

“But [with daprodustat] you don't have a safety signal in either population. So I don't see any reason why the FDA would favour dialysis versus non dialysis or vice versa. Because they both look good,” he said.

What is relevant, to Glaxo's commercial opportunity at least, is whether Akebia beats it to market, and then whether daprodustat gets a broad label in both populations studied. The Ascend data seem to give a good chance of that, but then the development path of the HIF-PH inhibitors has never been predictable.