The company’s off-the-shelf T-cell immunotherapy seems to be improving multile sclerosis disability, but an ongoing phase 2 trial will provide a better test.

A keenly awaited early-stage update on Atara’s ATA188 in aggressive forms of multiple sclerosis presented at Ectrims today have made for encouraging reading. Seven of 25 patients have seen sustained improvement on an important measure of disability, EDSS, with 11 remaining stable throughout the phase 1 portion of the study.

The company also presented new data on a biomarker called magnetisation transfer ratio (MTR), which is a measure of the density of myelin, the insulating sheath around nerves that is degraded in MS. Atara believes that a correlation can be seen between MTR and EDSS improvement in the new data, which could mean that ATA188 is promoting remyelination and driving the clinical benefit. Should this be confirmed in larger studies it would represent a big step forward.

A muted reaction from investors this morning – Atara shares were 9% lower in early trade – shows how overheated expectations had been, and points to the need for much more data before any of these claims can be substantiated.

The update concerned 18 subjects recruited into the open-label extension stage of the phase 1 portion of an ongoing trial, Embold. That study has already progressed to the phase 2 double-blind, placebo-controlled stage, from which Atara today promised an interim analysis in the first half of 2022.

This readout now becomes a big event for the company and this project. ATA188 is an allogeneic T-cell immunotherapy that targets Epstein-Barr virus-infected B cells and plasma cells; nearly all MS patients are positive for Epstein-Barr, and these infected cells drive an inflammatory cascade. ATA188 is thought to work by shutting down this inflammation and, perhaps, allowing the body to remyelinate damaged nerves.

On a call today Atara's chief executive, Pascal Touchon, emphasised that ATA188 requires no gene editing – no doubt in a nod to current safety concerns with gene-editing technology. Updated safety data today revealed no new issues, with no grade 4 or 5 events reported and no cases of cytokine release syndrome or graft versus host.

Results from the subjects recruited into the phase 1 trial have previously been reported; the new data today concerned an update on these, as well as the 18 who elected to move into the trial extension, and were followed for up to 39 months.

At the latest data cut-off, nine patients had achieved sustained disability improvement either during the phase 1 portion, which lasted 12 months, or the extension. Seven of these did so via sustained EDSS improvement – an important regulatory endpoint.

11 patients remained stable throughout the study, and on a conference call Atara stressed that in this patient population of primary progressive MS stable disease should be considered a response. Four patients had confirmed disability progression.

On the MTR presentation, patients who achieved sustained EDSS improvement showed greater increases in MTR from baseline at 12 months. In general, an increase in MTR was associated with improvement in EDSS scores, Atara claimed. 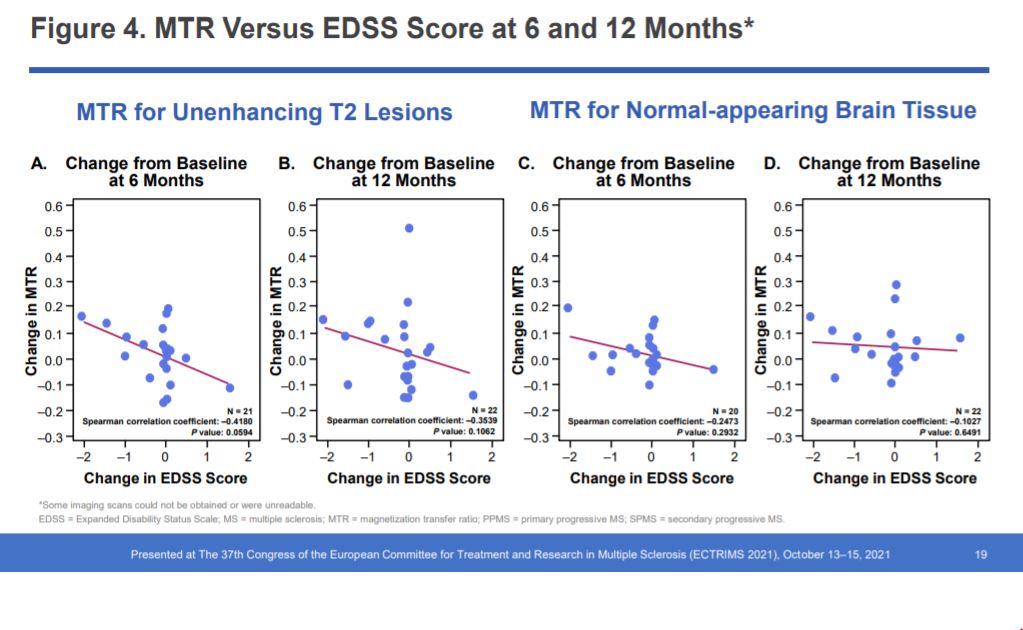 There are caveats here, mainly concerning the small patient numbers and the relatively short time period of the trial. Important questions also remain around MTR as a biomarker, a measure has not been widely used in MS trials to date. Unknowns include whether there can be “noise” in the signal – for example, whether the reading can be affected by oedema or dehydration. What regulators might make of the biomarker is also unknown.

But Atara clearly believes that it is amassing evidence that ATA188 promotes remyelination, the ultimate goal for MS research. No project to date has shown clear evidence of this. Much more data are needed, but hopefully this is a step in the right direction.

No news is bad news for Atara