Crispr Therapeutics might have stolen the Ash headlines, but a similar approach from Bluebird is also making progress.

The first came from Crispr Therapeutics, whose CTX001 impressed attendees at the Ash conference. But Bluebird Bio’s own project designed to boost foetal haemoglobin also looks good, according to an investigator-sponsored study published in the NEJM today.

Intriguingly the data were not presented at Ash; perhaps the study missed the cutoff date for submission. In six patients followed for at least six months levels of foetal haemoglobin increased, accounting for 20-41% of total haemoglobin at the most recent follow-up.

In five of these patients, total haemoglobin levels were 9.3-11.4g/dl. One subject who continued to receive blood transfusions was excluded from this analysis.

The last update from the phase I trial, run by Dr David Williams at the Boston Children's Hospital, came at last year's Ash meeting, in three patients. 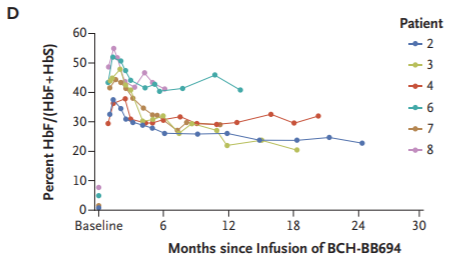 The results look similar to those seen with CTX001, with the usual caveats about cross-trial comparisons, and the small number of patients so far is another reason for caution. In the dataset presented at Ash today, in three sickle cell patients receiving CTX001, foetal haemoglobin accounted for 31-48% of total haemoglobin, while total haemoglobin levels were 11.5-13.2g/dl (Ash 2020 – Crispr gets another boost, December 5, 2020).

Most importantly, no patient treated with either therapy has since had a vaso-occlusive crisis.

Crispr’s CTX001 and Bluebird’s BCL11A shRNA both work on the premise that increasing levels of foetal haemoglobin could compensate for the defective haemoglobin found in sickle cell disease.

Both projects are autologous, ex vivo therapies that aim to suppress BCL11A, a transcription factor that normally suppresses the production of foetal haemoglobin.

However, this is where the similarities end. CTX001, which is partnered with Vertex, uses Crispr/Cas9 to edit the BCL11A gene, while Bluebird’s asset employs a lentiviral vector that encodes a short hairpin RNA targeting BCL11A mRNA.

Both approaches appear to hold promise. More data will be needed before a call can be made about whether one will come out on top.

Vertex and Crispr up the ante in gene therapy chase