The failure of a crucial pivotal study consigns Blueprint’s lead drug, Ayvakit, to a tiny niche.

Targeted oncology has become a watchword for sky-high valuations and drug prices, but by their very nature these projects have their limits. The Voyager trial, for example, has exposed the extent of the utility of Blueprint’s Ayvakit, which is unfortunately much smaller than the company had assumed.

Blueprint shares dropped 19% in early trade; the surprise failure of the late-line Gist study effectively limits the drug to a tiny niche. All further work in Gist has been abandoned, executives said today, as they admitted that FDA approval in a fourth-line setting, due next month, was now very unlikely to happen.

The Voyager result shows that the US regulator was right to be cautious when it came to reviewing Ayvakit, generically known as avapritinib. Blueprint filed on the back of the Navigator trial, which generated a highly impressive 86% overall response rate in patients with a PDGFRα Exon 18 mutation, but a less convincing 22% ORR in a wider fourth-line treatment setting.

As such, the FDA split the NDA into separate submissions, waiting for the Voyager result to make a decision in fourth-line patients, but granting full approval to the tiny genetic subtype in January (Blueprint beats Deciphera to the punch, January 10, 2020).

In the end, Voyager did not only fail to meet its primary endpoint; Ayvakit actually performed worse than Bayer's Stivarga, a drug that was considered a relatively easy bar to beat. 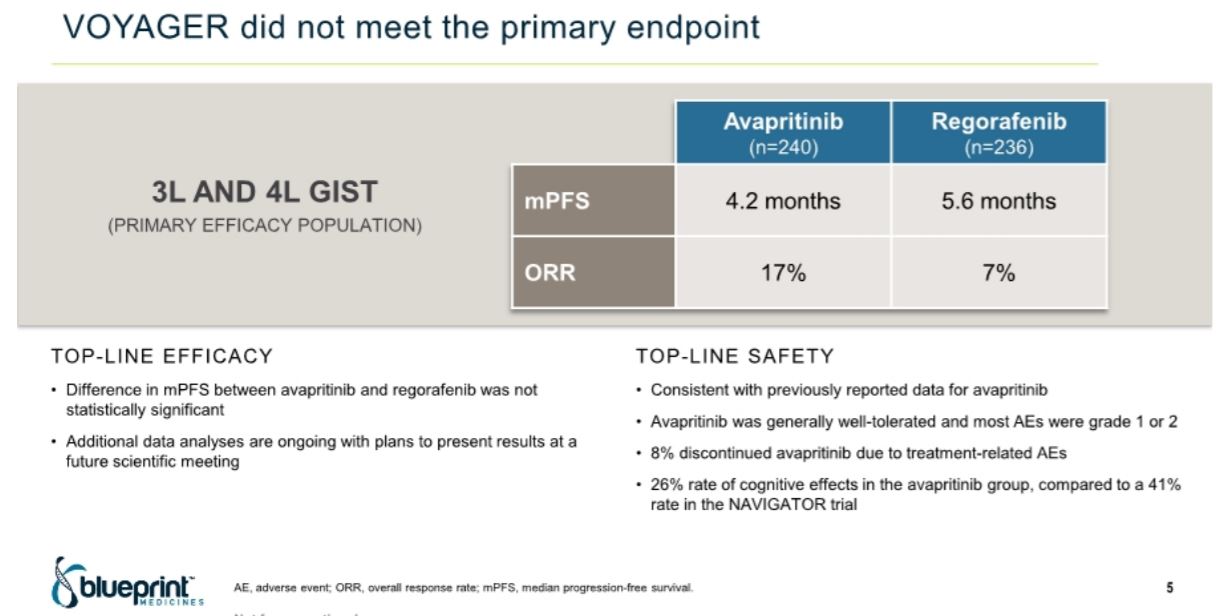 Searching to explain the failure, executives said there were no obvious problems with the design of the trial, suggesting that Ayvakit was unable to overcome the complexity and heterogeneity of late-line Gists. Avapritinib is highly targeted: it is described as a typical inhibitor of mutant Kit & PDGFRα kinase, optimised for D816V and other loop mutants.

“We hit the disease with a laser, and maybe we would have done better with a shot gun,” Jeff Albers, Blueprint’s chief executive, said on a call.

Why avapritinib beat on ORR but not mPFS was also unexplained; Andy Boral, chief medical officer, speculated that this might have had something to do with the pattern or pace of a tumour’s accumulation of resistance.

And while Avyakit’s current label looks safe, Gist with PDGFRα involvement is thought to concern only 2-14% of these tumours, a cancer type that is already pretty rare. Analysts at SVB Leerink estimate peak sales of $280m in this niche setting.

To wring further growth out of the drug the company must now win expansion into advanced systemic mastocytosis, in which a filing in planned later this year; Leerink estimates this market to be worth as much as $435m.

But Blueprint’s loss in Gist is a gain for Deciphera, whose shares jumped 16% this morning. That company’s ripretinib, which also hits Kit & PDGFRα, is due to hear on approval in an all-comers, fourth-line Gist setting in August. But ripretinib too still needs to show utility in much larger, earlier settings to fulfil its potential, and Deciphera will have to hope that its different way of targeting these kinases leads to a very different outcome.

Deciphera hopes Invictus win will be just the beginning

Vantage point – Life for kinase inhibitors in an immuno-oncology world