The Checkmate-9LA trial of Opdivo plus Yervoy yesterday read out positively for overall survival.

It was unfortunate for Bristol-Myers Squibb, but yesterday’s success in the first-line lung cancer study Checkmate-9LA was lost in the noise over Biogen’s extraordinary claim to have slowed decline in Alzheimer’s disease.

That said, Bristol’s Opdivo/Yervoy combo is likely to play second fiddle to Merck & Co’s Keytruda unless the actual data – no numbers were revealed yesterday – show an unexpectedly large benefit. And smart investors will have realised that a hit in Checkmate-9LA was possible after seeing some of the secondary analyses of the overhauled Checkmate-227 study at Esmo last month.

The Esmo presentation concerned the primary endpoint of Checkmate-227’s part 1a, median overall survival for Opdivo plus Yervoy versus chemo, in ≥1% expressing PD-L1 subjects. This was already known to have read out positively, and at Esmo the benefit was quantified at 17.1 versus 14.9 months (p=0.007).

But given the availability of Keytruda monotherapy in the ≥1% PD-L1 population this result was virtually irrelevant commercially. What was much more intriguing was a secondary OS endpoint in PD-L1 non-expressers (part 1b), and an exploratory analysis in part 1’s all-comers: both favoured the Bristol combo, presumably driven by the fact that chemo is known to work less well in PD-L1-negative tumours. 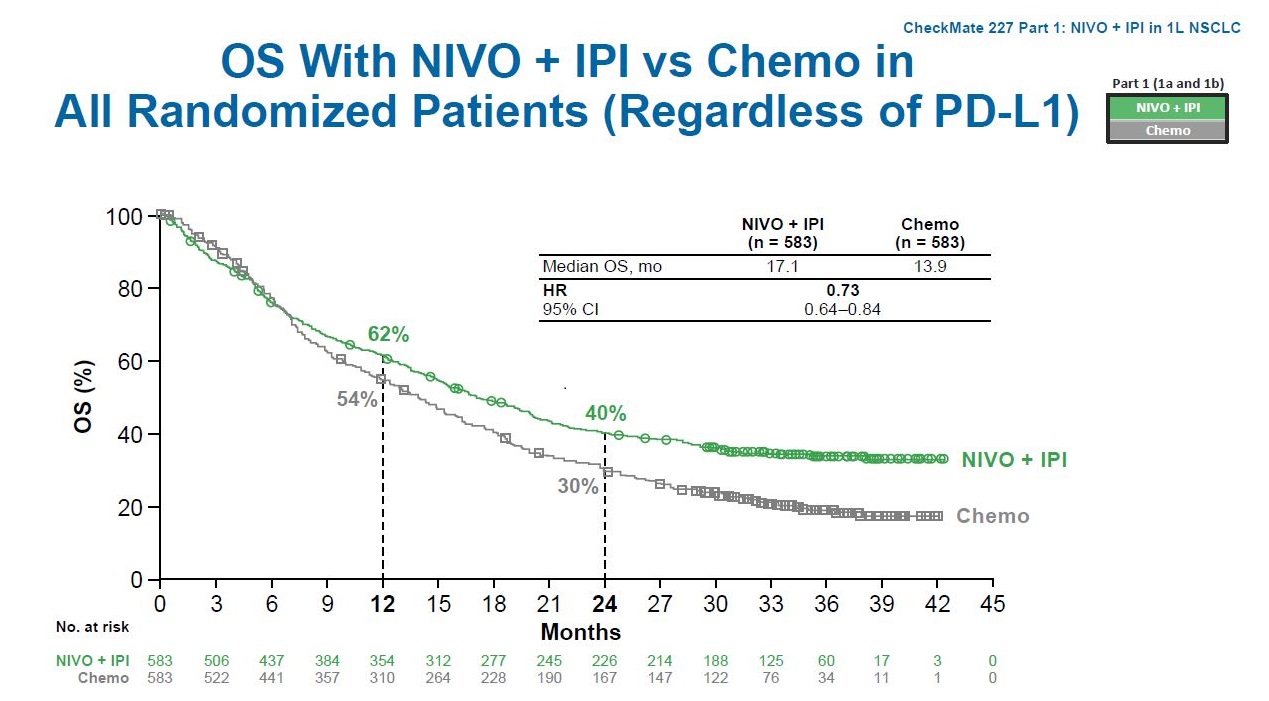 Armed with this knowledge it might have been logical to expect a positive readout from Checkmate-9LA, a trial that had been upsized from 420 to 700 subjects. That said, the ‘9LA setting differed from ‘227 in that it additionally gave active cohort subjects two cycles of chemo on top of the Opdivo/Yervoy doublet.

This fact alone would seem again to limit the Bristol therapy’s relevance over Keytruda, which as part of a chemo combo is available in all-comers. The bottom line is that, unless the OS benefit in ‘9LA is staggeringly large, Bristol will not be able to argue that it can offer PD-L1 non-expressers a chemo-free regimen.

Even if that claim is true any advantage would be questionable given Yervoy’s known toxicities. Indeed, in analysing Checkmate-227 the Esmo discussant was not convinced by Opdivo/Yervoy's potential over Keytruda in first-line NSCLC, pointing to the fact that 33% of the Bristol combo recipients in ‘227 had suffered serious adverse events.

Attention now turns to Astrazeneca’s Poseidon trial, which has a similar PD-L1/CTLA-4/chemo combo design to Checkmate-9LA, and whose completion has been delayed by a year and a half to April 2021. In Poseidon Imfinzi with or without tremelimumab is given on top of chemo, though chemo here is given over four cycles rather than the two of ‘9LA.

Either way, ‘227 and ‘9LA seem to have done a good job of distracting attention away from Bristol’s earlier fixation with tumour mutational burden. As numerous studies, including Astra’s failed Neptune, have shown this is at best a poorly understood biomarker.

Astrazeneca drops out of one lung cancer immunotherapy race