Approval for zuranolone might be in reach, but meeting sales expectations could be a different story.

On the face of it, Sage Therapeutics’ tinkering with its phase 3 Coral trial of zuranolone appears to have paid off. The study today hit its new primary endpoint, change in the 17-item Hamilton rating scale for depression (HamD-17) at day three.

But unimpressed investors sent the group’s stock down 13% this morning. Red flags included a waning benefit at two weeks, and questions about the clinical meaningfulness of the data. Sage and its partner Biogen might just have an approvable drug on their hands, but current blockbuster forecasts look a tad optimistic.

Sage believes that zuranolone, a Gaba-A modulator, could become an as-needed, short-course therapy for major depressive disorder with a rapid effect, making it different from standard antidepressants, which can take weeks or months to start working.

One potential use for the project could therefore be plugging the gap while patients wait for antidepressants to kick in. In Coral, patients received zuranolone alongside a standard antidepressant of choice, or an antidepressant plus placebo, for two weeks. Subjects were then given the antidepressant alone for another four weeks.

The original primary endpoint of the study was change in HamD-17 at day 15, but Sage changed this to the three-day outcome in November. This suggests that the company was trying to preempt waning efficacy, perhaps on the basis of the earlier Waterfall study.

On this measure Coral was a hit, with the zuranolone plus antidepressant arm outperforming antidepressants alone at day three, to the tune of a mean 1.9-point benefit on Ham-D-17.

Sage also flagged up a prespecified secondary endpoint, Ham-D-17 over the treatment period, using equal-weighted means at days 3, 8, 12 and 15.

However, the fly in the ointment was that, when this was broken down, the benefit disappeared at 15 days, with a nominal p value of 0.25. 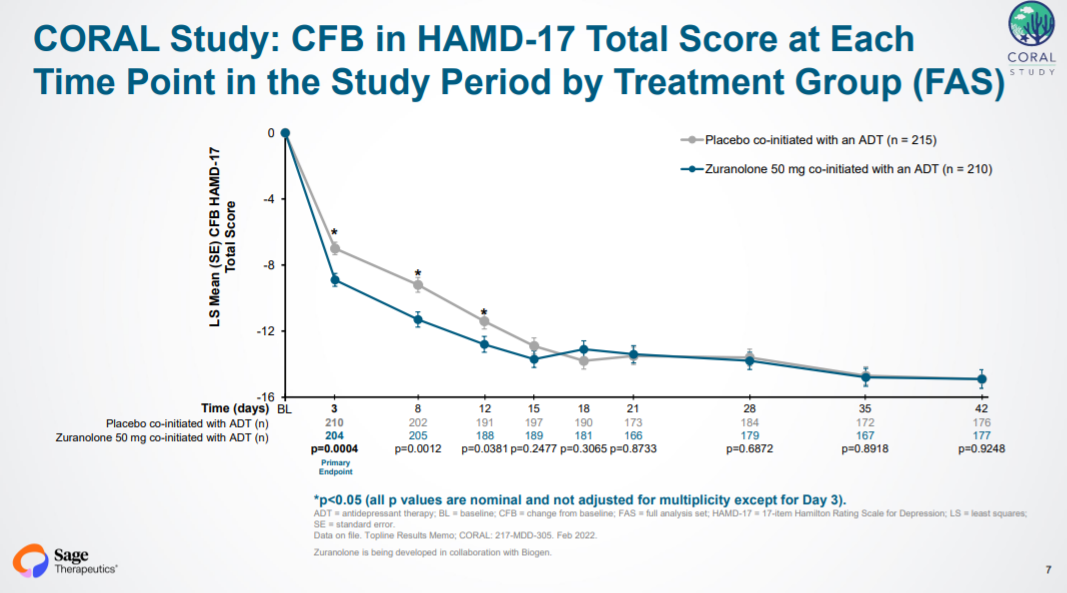 When asked about this during a conference call today, Sage’s chief development officer, Jim Doherty, said the company’s main concern was whether there was a loss of response after the treatment period, which was not seen in Coral.

Another question is whether a two-point difference on Ham-D-17 versus antidepressants alone is clinically meaningful.

And zuranolone does not come without risks: somnolence and dizziness were more commonly seen with the combination than with antidepressants alone. However, Mr Doherty pointed to a higher incidence of nausea in the control group, and said the company would investigate whether adding zuranolone could ameliorate this side effect.

Sage touted a greater effect on Ham-D-17 in a subgroup of patients with depression and anxiety, but this did not win over investors.

Sage and Biogen are set to start a rolling submission for zuranolone in major depressive disorder early this year, and to complete this in the second half.

The Coral disappointment comes after zuranolone failed in the pivotal Mountain study, then hit – albeit unconvincingly – in the Waterfall trial. The filing will also include data from the open-label Shoreline study, looking at as-needed repeat therapy over one year, a gauge of how zuranolone might be used in the real world.

Sellside consensus compiled by Evaluate Pharma puts zuranolone's 2026 in-market sales at $1.6bn, but this is increasingly looking like a tough target.

Ultimately, Stifel analysts concluded that zuranolone would probably get approved, but noted that stronger data would have been handy for a drug that will necessitate a change in physicians’ behaviour.

Sage gets a postpartum reprieve