Dicerna can’t catch up with Alnylam

Phyox2 data back Dicerna’s nedosiran in just one type of primary hyperoxaluria, where Alnylam already has an 18-month head start.

The bull case had Dicerna’s lead RNAi asset, nedosiran, becoming broadly applicable across all three types of primary hyperoxaluria, an ultra-rare kidney disorder. Yesterday, however, expectations took a knock, with keenly awaited results of the Phyox2 trial backing its effect only in PH1, the most severe type.

With the PH3 type being the subject of a separate study, Phyox4, attention will fall on why nedosiran showed no effect on PH2, which was meant to have differentiated it from its RNAi competitor, Alnylam’s Oxlumo. And the biggest pessimists will say that the setback suggests the limitations of Dicerna’s RNAi technology.

Evercore ISI analysts are not so gloomy, saying the tech remains intact, and putting the problem down to the high variability of PH2 and the small number of patients with this disease type enrolled into Phyox2. The markets do not entirely agree, this morning sending Dicerna down 34% and Alnylam up 1%.

Nedosiran silences the LHDA gene, which codes for LDH, an enzyme responsible for the generation of the oxalate that accumulates in the kidneys of primary hyperoxaluria patients and causes stones and calcinosis.

This is why Phyox2 set as its primary endpoint the change from baseline in 24-hour excreted urinary oxalate, measured across the last three months of a six-month treatment period. The good news, such as it was, is that across all 34 subjects in the Phyox2 analysis nedosiran recorded a 51% placebo-adjusted reduction in urinary oxalate; the reduction versus placebo yielded a p value of under 0.0001.

However, the benefit was entirely driven by Phyox2’s 28 PH1 patients. In PH2 there was absolutely no benefit; but there were only six subjects here, and in the five on nedosiran there was no change from baseline, whereas the sole placebo patient actually saw a 43% reduction in urinary oxalate. 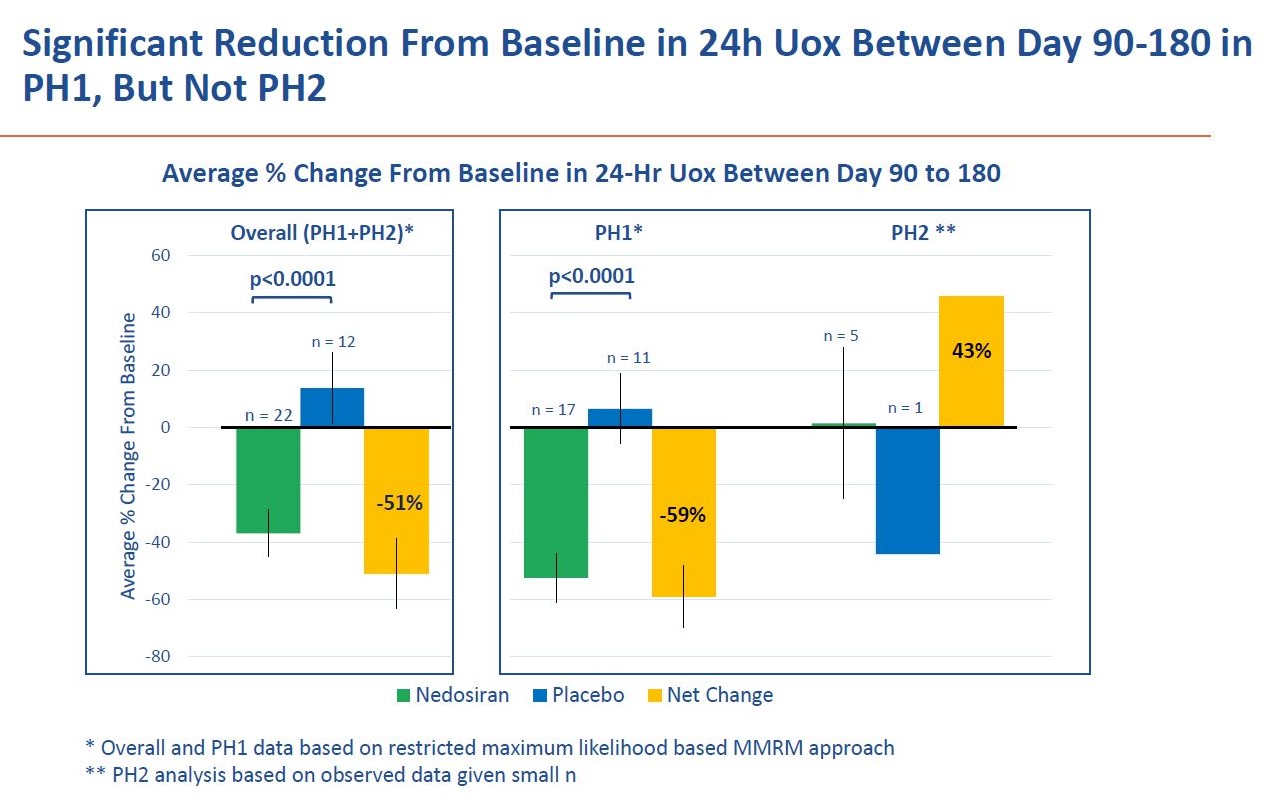 On an analyst call yesterday Dicerna had no option but to admit that its US submission for nedosiran would be only for PH1. The filing, earlier thought possible in the current quarter, will now take place in the fourth. Alnylam’s Oxlumo has generated similar data to nedosiran in PH1, showing a 53% placebo-adjusted reduction in urinary oxalate in its Illuminate-A study; it was approved last December, and posted $25m of sales in the first half of 2021.

A possible joker in the pack for Dicerna is nedosiran’s PH3 study, Phyox4, whose readout has been delayed from mid-year to October. This means that the company could have positive PH3 data in hand by the time it files nedosiran; for now it is focusing on PH1, but says it might adjust plans based on the data it gets in PH3.

That said, PH3 is a different prospect in terms of disease mechanism, and it is also the mildest form of primary hyperoxaluria. Indeed, it frequently requires no medical intervention, so it is debatable whether it even represents a viable market.

This is why Dicerna’s data in PH2 were so important. The company can be blamed for not running a study specifically in PH2, and perhaps it will do so in future; it says it is evaluating the next steps in PH2, but will make no comment about those steps might be.

For now Dicerna faces the prospect of entering a rare disease market late, with no way of showing an advantage over the similar incumbent therapy.