Data on five patients treated with the Crispr therapy EDIT-101 raise doubts about efficacy and safety.

Editas kept investors waiting for years for the first data from one of its Crispr-based gene editing projects. Yesterday, its big reveal disappointed.

The group claimed hints of efficacy with EDIT-101, which is being developed for the rare inherited eye disorder Leber congenital amaurosis, but these are hard to see. More troubling are reports of retinal tears and haemorrhage. Editas plans to push the dose of EDIT-101 higher, but the latest data suggest that finding a therapeutic window might be difficult.

Despite its positive spin on the results, which came from the phase 1/2 Brilliance trial, Editas’s stock sank 19% yesterday. But the company is still worth nearly $3bn, which seems hard to credit given its very early-stage pipeline.

True, there is an unmet need in Leber congenital amaurosis type 10 (LCA10), the disease subtype Editas is targeting, caused by mutations in the CEP290 gene. EDIT-101, which is injected subretinally, is designed to delete the mutation in question, c.2991+1655A>G, using Crispr-Cas9 in vivo gene editing.

The jury is still out on the effectiveness of this strategy. The results released yesterday came from two patients in the low-dose and three in the mid-dose cohort of Brilliance, testing 6x1011vg/ml and 1.1x1012vg/ml respectively.

According to Editas, two subjects in the mid-dose group showed signs of efficacy after three to six months of follow-up. For one of these patients that interpretation is debatable, given no improvement in best-corrected visual acuity with the EDIT-101-treated eye versus the patient’s untreated eye, which acted as a control.

For the best-performing patient, a 0.7logMAR improvement in BCVA versus control eye looks more clear-cut. The lead investigator of Brilliance, Dr Eric Pierce of the Massachusetts Eye and Ear hospital, noted during an Editas conference call yesterday that a 0.3logMAR improvement here was considered clinically meaningful.

However, this improvement was seen in only one patient out of five. Furthermore, Evercore ISI’s Liisa Bayko noted that in this subject BCVA had been measured using the Berkeley rudimentary visual test, which is not as well validated and reproducible as the more standard letter chart known as the early treatment diabetic retinopathy study. 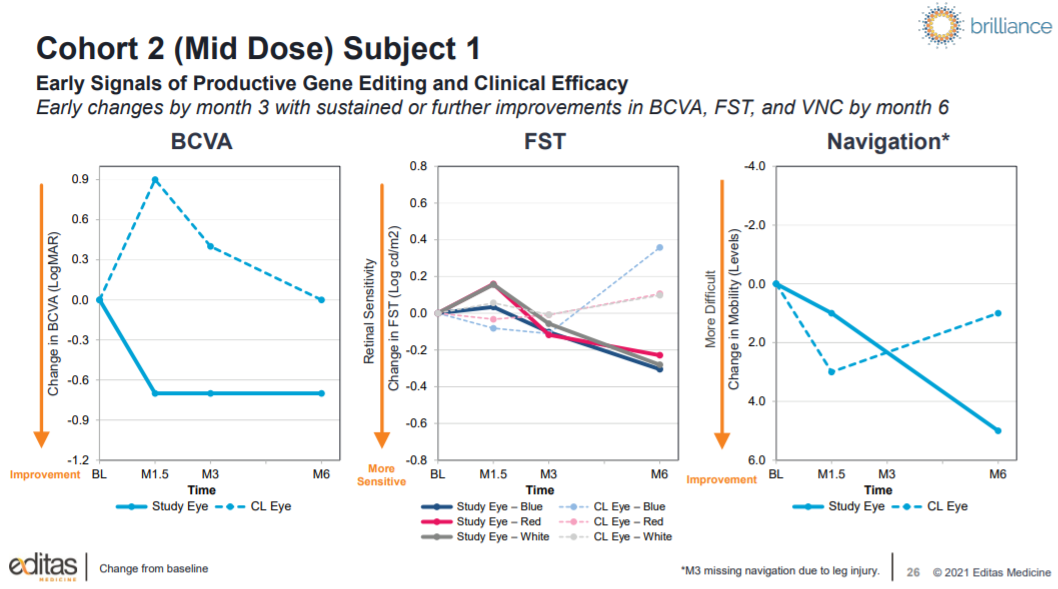 It is difficult to conclude much about the efficacy of EDIT-101 on the available evidence. Perhaps things will become clearer next spring with longer-term results from the low and mid-dose cohorts, as well as data from the high-dose arm, testing 3x1012vg/ml. Editas is also starting a mid-dose paediatric cohort.

Toxicity might prove a stumbling block at a higher dose, though. Editas said in its press release and slides that no serious adverse events had been seen in Brilliance, highlighting a lack of treatment-related cataracts, oedema or retinal thinning.

However, a presentation yesterday at the International Symposium on Retinal Degeneration detailed one case of hypotony among two low-dose patients, and two retinal tears and one retinal haemorrhage among four mid-dose subjects.

Perhaps patients would be willing to risk these adverse events with no other options available. But another LCA10 therapy is on the horizon: Proqr’s sepofarsen, an antisense project that binds to CEP290 RNA to enable correct splicing and production of the CEP290 protein.

EDIT-101 might hold the promise of a once-and-done therapy, but sepofarsen is given every six months, still a relatively convenient schedule compared with some eye drugs.

And so far sepofarsen looks like a better bet, although patient numbers are admittedly small. In a phase 1/2 trial 11 sepofarsen-treated patients showed a 0.55 logMAR improvement in BCVA.

Proqr is set to report data from the pivotal sham-controlled Illuminate trial next year, and all eyes will now be on this update.

Another step backwards for Editas

Reneuron crashes out of retinitis pigmentosa