Fibrogen stretches the bounds of credibility

In this era of powerful payers, novel drugs must offer more than a convenience advantage to command a higher price than existing, equally effective therapies. Thus Fibrogen’s claim that its anaemia pill roxadustat was safer than infused EPO agents, for certain patients on dialysis, formed a big part the project’s perceived value.

That value, already diminished by the company’s opaque disclosure of complex datasets, was seriously dented again yesterday. Fibrogen’s staggering admission of major data errors in previous presentations leaves roxadustat looking like a considerably weaker proposition. A hard line from regulators cannot be ruled out, even before considering what doctors will make of all this.

The mistake concerns pooled safety data first presented back in 2019 at the American Society of Nephrology on roxa, which is being developed to treat anaemia associated with chronic kidney disease. At the time the company claimed that the findings cleared up doubt about roxa’s safety profile in two distinct kidney disease populations – those dependent on dialysis and pre-dialysis patients – although many remained unconvinced.

Those doubters will feel vindicated today. Fibrogen revealed that the disclosed data had been adjusted post hoc for various stratification factors. On a pre-specified basis, on which regulatory decisions will be made, roxadustat’s safety edge narrows in both populations. 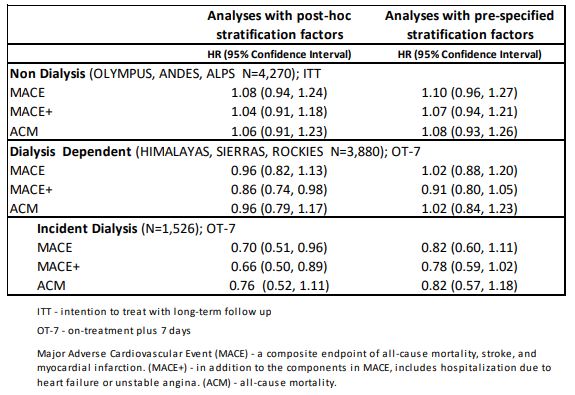 The most painful correction came in the incident dialysis subpopulation, which comprises patients newly on dialysis; with all upper bounds of the 95% confidence interval crossing 1.0, a previous claim of superiority versus EPO evaporated.

On a conference call yesterday executives studiously avoided analysts' enquiries about what this might mean for roxadustat’s peak sales potential, but a 35% plunge in Fibrogen shares this morning helped to answer that question.

Findings across the larger dialysis population also weakened, although executives declined to say what had happened in a separate subpopulation known as stable dialysis. These are patients who have been on dialysis for some time, and concerns had previously been raised about what might be going on in this group, given that incident dialysis patients seem to be driving the positive signals.

Fibrogen has never released data on the stable subgroup, but said these would emerge at an advisory committee hearing tentatively scheduled for July 15. The potential for deleterious findings cannot be ruled out, particularly given the overall weakening of the results.

However, it was always the pre-dialysis patients that held the potential to unlock the real value of roxadustat; EPO’s cardiovascular toxicity warnings mean that these agents are not used in these less-sick patients. To break into this new market roxa needed to have a label devoid of a black box warning – and the new data cuts make this outcome highly improbable.

A bigger question is whether regulators believe roxadustat warrants approval in this population at all. Fibrogen maintains that the project is “comparable” to placebo, from a safety perspective, but that might not be good enough for a very risk-averse US regulator.

The FDA’s opinions will become known at the adcom. Roxa was filed with the EMA by the regional partner Astellas in March 2020, meaning that the EU agency’s opinion should emerge sooner, and could well be telling.

Of course Fibrogen’s US partner, Astrazeneca, cannot be forgotten in all this. Although the smaller biotech has been leading the regulatory process with the FDA, Astra employees had surely been scrutinising the data, and also seemingly did not notice that the wrong numbers were being presented.

An Astra spokesperson said: “We continue to have confidence in roxadustat’s benefit/risk profile.” But, coming so soon after accusations of obfuscation with the data on Astra's Oxford University-partnered Covid-19 vaccine, this reflects especially poorly on the pharma giant.

It might never become clear who knew what and when, but the partners will struggle to shake suspicions around the whole roxadustat programme. Fibrogen claims that both pre- and post-hoc analysis had been filed as part of the original NDA, and that the agency has been made aware of the mistaken public presentations.

Perhaps this whole sorry debacle helps to explain why the FDA review has been protracted; a decision was initially due last December, but this was delayed and then the advisory committee called, news that sent Fibrogen shares plunging 25%.

Today’s fresh decline takes the stock to a four-year low, into a hole that feels very much of the company’s making.