Idorsia claims second insomnia hit, but has it done enough?

Daridorexant can't reach the heights of its first pivotal study win, but a pooled analysis could still save it.

Idorsia has followed daridorexant’s first pivotal study success in insomnia, reported in April, with what it claims to be a hit in the project’s second pivotal trial. Closer reading of the results, however, reveals a rather mixed dataset.

Not only has the 25mg dose missed the key secondary measure of daytime functioning – an expected setback after its first pivotal study miss – one of the two co-primary endpoints has failed to show a benefit, too. Idorsia must now hope that pooling the results for the 25mg dose passes statistical and regulatory muster.

Both the earlier 301 trial and the 302 study toplined today measured similar efficacy metrics, and enrolled around 900 patients each, but one key difference between them was always apparent: while the first tested 25mg and 50mg, the second looked at 10mg and 25mg.

25mg therefore seemed always to be the dose Idorsia was banking on, with 50mg representing something of a wild card. However, in the 301 study it was only 50mg that aced both primary and both secondary endpoints (Idorsia adds insomnia to its pipeline successes, April 20, 2020).

The 302 trial readout shows 25mg missing the secondary daytime functioning endpoint, as it had in the first, and additionally hitting only one of the primaries – sleep maintenance, but not sleep onset. The lowest, 10mg dose failed to hit any endpoint with statistical significance, though all showed a numerical benefit versus placebo. 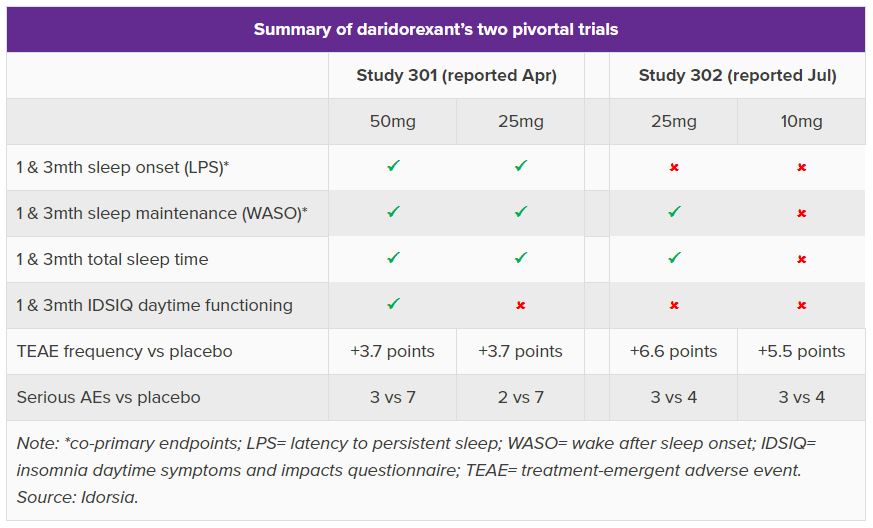 On an analyst call Idorsia stressed that numerically the results were consistent across both trials, though it will not reveal any numbers until a scientific conference. Its argument is that it is merely statistical powering that has defeated daridorexant in some aspects of trial 302.

Today, the group revealed that statistical “alpha” had been split in two for the primary analysis, meaning that a p value of 0.025 or better was needed for daridorexant to meet either co-primary endpoint. There was then a sequential analysis for the secondary endpoints.

Thus the company is pinning its hopes on the US FDA accepting the totality of the data, backed by an as yet undisclosed pooled analysis of the 25mg dose’s result in studies 301 and 302 versus placebo. A US filing is to be submitted by the end of 2020.

However, the group will still not spell out which dose it wants to see approved, hinting that it might file 25mg as well as 50mg and let the regulator decide. Tellingly, it continues to cite daridorexant’s lack of next-morning residual hangover as a safety advantage, even though 50mg is the only dose to have shown a statistical effect on the IDSIQ patient-reported questionnaire.

Safety is key for insomnia drugs, because of their propensity to cause sleepiness during the day. Daridorexant is a dual orexin receptor antagonist, and approved orexin antagonists, Merck & Co’s Belsomra and Eisai’s Dayvigo, carry warnings of daytime impairment and possible effects on driving performance.

Such considerations perhaps caused Idorsia to put its money on daridorexant’s 25mg dose; ironically, however, 50mg appears to have shown no more propensity for adverse events than 25mg or 10mg, at least in the limited scope of two pivotal studies.

A separate safety and tolerability trial, study 303, should yield results in time for the FDA’s filing review, Idorsia said. Given that overall the data are positive, perhaps leaving the matter of doses in the hands of a lenient regulator is a smart move.

Atea and Roche get a Covid-19 antiviral warning