Immatics takes up the Spac baton

First signals of efficacy, at doses thought to have been sub-therapeutic, send the Spac-listed group up 30%.

With Immunovant’s bubble deflating fast the biotech Spac story is in desperate need of new ambassadors. Today the German group Immmatics made a strong bid to become this business model’s poster child, climbing on reports of efficacy with its autologous engineered T-cell receptor (TCR) projects.

The open-label case reports amount to one unconfirmed partial remission in 10 subjects across three studies of three assets. This might seem unimpressive, but cell engraftment and persistence was seen in all 10 patients, and tumours shrunk despite what Immatics had presumed would be sub-therapeutic dose levels.

Previous engineered TCR studies run by competitors had suggested a billion T cells as the “magical threshold” that had to be crossed for activity to be seen, Immatics’ chief executive, Harpreet Singh, told an analyst call. Yet today’s reports, in which some degree of tumour shrinkage was seen in eight of the 10 subjects, all concerned doses below 600m cells.

Showing efficacy has been a long time coming. It is only recently that companies like Adaptimmune and Immunocore have shown TCRs to be anywhere near as efficacious as Car-T therapy, and Immatics first spoke to Evaluate Vantage about its TCR approach back in 2015.

In the meantime Immatics gained a public listing last year by reversing into a Spac, or special-purpose acquisition company, called Arya Sciences Acquisition. Spacs, sometimes called blank-cheque companies, are increasingly pitched as a means of listing that is faster and cheaper than an IPO.

But Immatics’ stock performance had been fairly unspectacular, while Immunovant, until recently the most widely touted Spac success story, went from strength to strength.

Investors will thus welcome signs that Immatics’ TCR approach might catch up with Immunocore’s tebentafusp, which has shown a survival benefit in uveal melanoma, and three Adaptimmune TCR projects that have yielded remissions in various cancers.

Immatics’ other two TCRs, IMA201 and IMA202, showed five stable diseases among six patients in the reports detailed today. Like all TCR projects these are limited to patients with a specific HLA haplotype; all three Immatics assets are restricted to HLA-A*02, which is present in 40% of Caucasians. 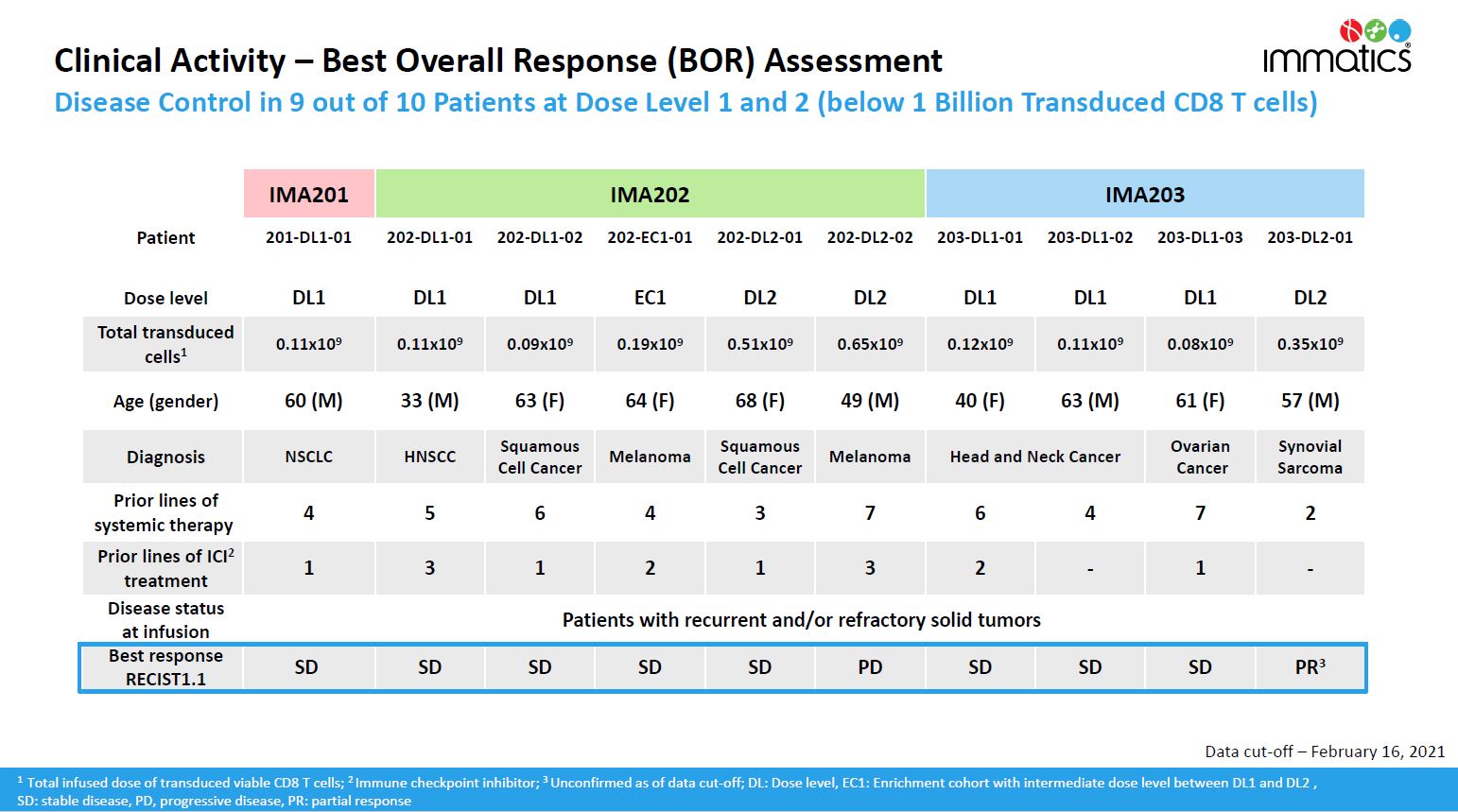 As for safety, over 80% of subjects across the three Immatics studies experienced cytokine release syndrome, though none above grade 2. Grade 3 atrial fibrillation was seen in an IMA203 subject, and this might have been linked with cytokine release but is not fully understood, though it resolved within 48 hours.

Asked why Immatics was seeing efficacy signals at relatively low cell doses the group pointed to its proprietary, short manufacturing method, saying this resulted in relatively young T cells that might engraft better and persist longer than rival approaches.

Dosing at higher levels, possibly above the “magical” billion cells, is due to start later this year.